Brazil game: his sister, Isabelle, could have played better…

As an ex-manager of some years’ experience, how could I possibly not comment on Brazil 1 Germany 7? I had already told my dear wife, who is becoming a bit of an expert herself after more than thirty years’ careful training, that Brazil were lucky to have beaten Croatia, and that it was a good thing that Referee Nishimura was so well aware of what he was supposed to do.
Last night it wasn’t so much that Germany were supernaturally brilliant, as that Brazil were gutlessly pathetic. I would have said that they all played like a bunch of “big girls’ blouses” were it not that every woman’s team that I have ever seen could have given them valuable lessons in determination and will to win. Brazil seemed to have the idea that they possessed  a divine right to success, and would easily be able to compensate for the absence of the only world class player they have. Set against them was a German team who clearly knew what they were supposed to do… attack purposefully with direct, organised football, carried out with accuracy, and, above all, great speed. Worst player on the pitch was David Luiz Moreira Marinho, who evoked tender comparisons with Steve Foster and Darren Peacock of blessed memory for Luton, Brighton and Newcastle fans.
Brazil are not the first champions to get an unexpected trouncing, though. Way back on December 5th 1908, Sunderland visited the then St James’ Park to face Newcastle United, League Champions in 1904-1905, 1906-1907, and, by a supreme irony, 1908-1909. The final result was Newcastle United 1 (Shearer, penalty) Sunderland 9. Sunderland scored eight goals in 28 minutes, and the last five in eight minutes. Most of the Sunderland fans were unable to get into the packed ground and had to return to Roker Park, where, as they watched the reserve fixture between the two sides, they could only follow the progress of the first team on a score board. 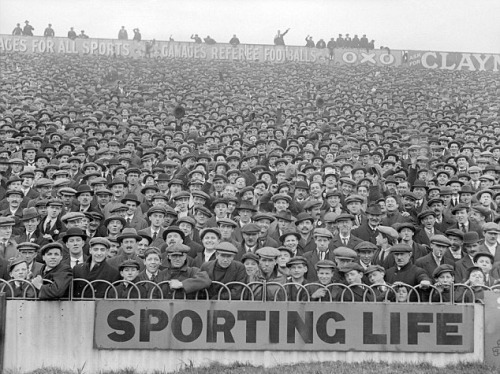 Notice a young Adolf Hitler, practising nervously right at the back. Ironically, the Führer seems to be the only person without a cap on.

2 responses to “Brazil game: his sister, Isabelle, could have played better…”