At the end of either the Christmas Term or the Easter Term or sometimes both, there used to be a tradition of the Teachers playing the School Prefects at football, or soccer as some call it. The very first one took place as far back as the evening of Monday, March 9th 1959. The staff triumphed by a single goal.  Nowadays, Health and Safety Regulations have put paid to such risky and dangerous pursuits.

The game used to take place here, on the Forest Recreation Ground:

When I was a lot younger and a lot, lot, thinner, I used to play in such games, and these photographs show a match from the early 1980s. I was newly married and my beautiful young wife, as one of, admittedly, very few spectators, was given a camera and the freedom to take a few pictures. In total, there were only ten, because in those days, there were no digital cameras, and people were not in the habit of shooting hundreds, if not thousands, of photographs on the off chance that three or four might be good ones.
This first photograph shows my good self in the blue shirt and green shorts. The other player in blue is Paul Morris, a teacher of Physics, who, like myself, retired within the last two years. Everybody else is a Prefect, although I am sorry to say that I could not put a name to any of them.

This photograph shows a young red haired gentleman playing for the staff team and running off with the ball into attack. He is Bob Howard who had been Best Man at our wedding. To his left, in red, is Richard Willan, one of Bob’s colleagues in the Geography Department. Richard retired in the same year as myself.

This final picture shows my unbelievably thin self, still in my green, blue and red outfit. I somehow seem to have acquired a mop of curly, dark brown hair, instead of the white ensemble I now have. On the right, in front of the goalpost is Best Man Bob Howard. The other player in blue is not a member of staff, but, presumably, a Prefect playing for the Staff Team to make up the numbers. Again, I could not name any of the opposition, but I do recognise a couple of the spectators. The red haired young man with the non-regulation brown scarf is Dave Beech who played for the school First Eleven at football on around half a dozen occasions when I was the team manager. To the left of him is Russell Poole, a superb young cricketer, whose Dad used to come down every games day to the Games Field to coach cricket to the more talented young players. 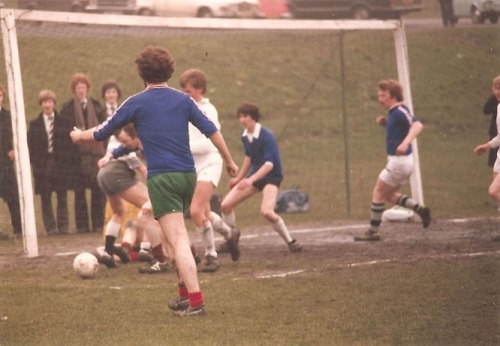