The Beast of Noth

A more modern monster to menace the peace and tranquillity of the French countryside and its inhabitants was the wonderfully named “Beast of Noth”, “La Bête de Noth”. Here is an aerial view of where it was seen: 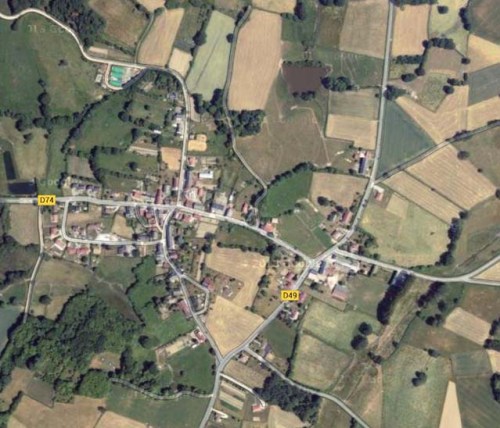 Noth is a small village to the north of Limoges. It is marked in red on the map of France. The street map shows just how small a place it is:

Once again, I will look at a number of French cryptozoological websites and you can take your own average between them. I have combined two apparently closely related websites to produce this, slightly more detailed, account…

“In November 1982 the sun is rising over Noth, a village of just 450 people. Marcel Jinjeau, a market gardener from Fongeneuille near Noth, steps into his field to start the first jobs of the morning. Suddenly he notices through a veil of mist a shape lying on the grass. He thinks it is a calf. The animal feels his presence, sniffs the air then stands up. Marcel pinches himself: it is not a cow, or any bovine. The back end of the animal is slim but the neck is like that of a bull. And the way it walks. It’s like some kind of cat! 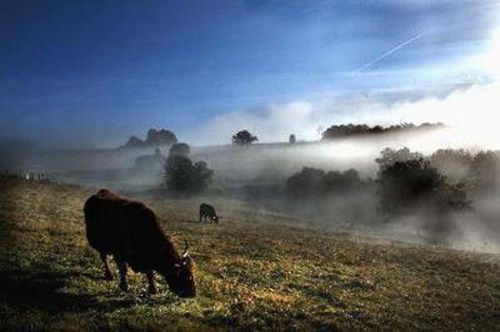 The animal walks off to take refuge in the woods. Terrified, Marcel rushes back home. If he tells this story to the village, they will think he is a madman. The following day at first light, just a few hundred metres away, at the Castle of La Fot, one of the servants goes to fetch his master’s car from the garage. As he is approaching the vehicle, he hears a savage growling in the darkness. Frightened, the man goes off to find a torch and a rifle, but when he returns to the garage, there is nothing there. Outside on the other hand, the strange visitor has left the imprint of his paws: four inches long (10cm) long, and nearly five inches(12 cm) across; a hefty animal. In the following days, the beast will leave other tracks: the corpses of lambs, that of a bullock, and a heifer. They are ripped to pieces, torn to shreds. Today though, a storm will wash away all trace of it.
Died of Fright
Meanwhile, that very afternoon the Mayor of Noth, André Lalande, and his friend, one of the partners in the Wolf Centre at Dun-le-Palestel then organise a beat. About thirty local hunters rush off to scour the forest, but the weather is against them. A storm brews up, the wind cuts out all electric power, and vast torrents of water wash their cars away. The animal is seen by several witnesses but many hunters turn back.
Not Rémy L. To prove his reputation as a crack shot, and to brave the elements which have been unleashed, he rushes off into the mud when suddenly – the beast looms up just five metres in front from him. He aims his rifle. But all of his body is shaking. He has never faced an animal of this kind. He fires, but only hits the cabbages. And he flees without further ado, quaking with fear. He will remain in shock for two days, completely incapable of putting a name to this creature. Which disappears, only to reappear forty kilometres away in Haute-Vienne, near Chateauponsac. In this area, witnesses talk of an animal a great deal bigger than a dog, with a long tail and with fur the colour of burnt sienna (a dark orangey-brown). The victims increase in number and terror spreads. People think they are seeing this feline everywhere. In the schools the children take fright and their teachers reassure them as best they can. The Mayor of Noth gives the cast of the paw prints to Dr Klein, a Parisian veterinary who is totally upfront.

“They are those of a lion or a puma.” And just what is an animal like this doing right in the middle of the Creuse region?
Some people have their own ideas. Since no circus has reported any escape of an animal, there must be a man behind it. Somebody who has come back from Africa. Somebody who is wealthy enough to carry out the scheme. All eyes all turn towards an aristocrat in North, the Marquis de V. The rumours become increasingly accusatory, “There has been an incident”, they murmur in the village. “He has lost his lion and he can’t get his hands back on it.” An even stronger rumour is that the Marquis remains a  ghostly figure, never there, always somewhere else, away in Moselle. The gossips have an answer for everything. When the zoologists state that the beast’s appetite is abnormally light for a big cat, they argue “It’s because the hand of Man is feeding it”. Moreover when there is a new beat near Chateauponsac on December 12th, two witnesses state that they have caught a glimpse of the Beast deep in the forest……with a man. An hallucination?
During a year there are sporadic reports of people who think that they may have seen this feline, until the gossip finally dies away.  Today in the village, nobody is keen to retract what has been said. “No….I tell you….there was an animal, the people who saw it said it used to have a strange expression in its eyes. But one that they will never forget.”

A slightly less dramatic telling of the tale comes in Wikipedia:

“The « Bête de Noth » was a carnivorous animal behind a series of attacks on flocks of sheep from November 1982 onwards, in the Department of Creuse.  Among others, on November 10th the Beast of Noth killed a bullock and a heifer each weighing 900lb, both at a place called Maison-neuve.

And then on November 19th, two lambs at Auzillac, with another at Maupas on December 3rd, and then a second heifer at Grand-bourg on December 9th. It was not the attacks on farm animals which appalled people so much as the state in which the corpses were found. They were all horribly ripped to shreds. Rumours began to circulate, suggesting a lion or a puma imported by an aristocrat in the area. During a beat organised in the Forest of Noth in November 1982 one huntsman was confronted by the animal but he was not able to identify it. The whole affair has never been explained.”

7 responses to “The Beast of Noth”