A Werewolf in Cambridgeshire. Run away!!

In three previous blog posts, I discussed “Shuck”, the huge phantom black dog, who for centuries has roamed, for the most part, the fields, fens and even beaches of East Anglia. I showed, though, that the cryptic canid has also walked on occasion in Nottinghamshire, visiting churchyards and graveyards. He frequents ancient tracks and pathways and, in particular, a lonely footpath down by the River Trent in Beckingham. He has been seen in isolated Crow Lane in South Muskham and, in recent times, on a pitch black Blyth Road, near Hodsock Priory: 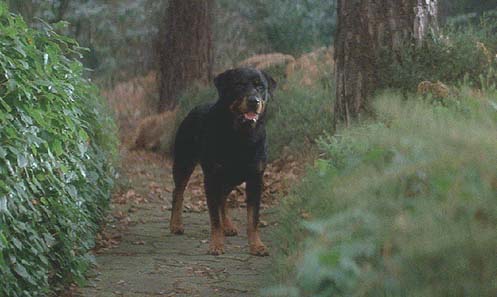 In my third blogpost, I tried to establish a link with the American Wolfmen such as the “Beast of Bray Road”: 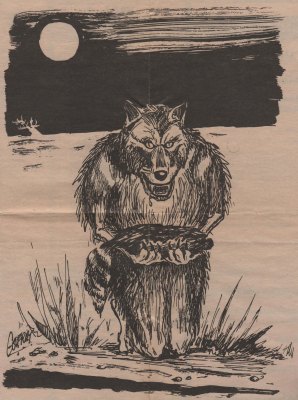 These are hairy bipeds with canid features who, like Black Shuck, seem to occur “near freshwater; on hills; at boundary areas such as roads; and on or near burial grounds, and military zones, and all types of sacred areas around the world”:

These are the words of Linda S Godfrey in her wonderful book, “Real Wolfmen: True Encounters in Modern America”:

After receiving this book as a Christmas present in 2013, I received an equally interesting publication in 2014. It was “Haunted Skies Volume One” by John Hanson and Dawn Holloway:

As they say on the cover, the book is part of a whole series telling the entire story of British UFOs. In total, there are ten different volumes and they are, quite simply, an absolute tour de force, a labour of love which runs from 1940 to the present day. So far, I have bought a number of other volumes although I am still a little bit short of the full set (as they say).

What has this got to do with Shuck you may ask? Does this mean that the Beast of Bray Road has moved kennel to England?

This volume runs from 1972-1974. It contains a tale told about RAF Alconbury, a USAAF airbase in Cambridgeshire, which has a number of claims to fame as being haunted by a variety of different spectres. Here is a large scale map of the area. Look for the orange arrow which indicates the airbase:

And here is a close up. The orange arrow is in the same place on both maps:

The amazing tale told to John Hanson and Dawn Holloway, the authors of the book, by an eyewitness, is that a mechanic was:

“carrying out some routine work to an F-5 Aircraft, parked on the runway, a job that should have been completed in an hour. When he failed to make the telephone call, requesting a lift back from the Hangar, a search went out to find him. They found him sitting in the aircraft, as white as a sheet, with the canopy closed. Although I asked him, many times, what it was that he had seen, he declined, saying that it had frightened him so much that he refused to go anywhere near that location again. We discovered, from another source, that the man had seen a terrifying hairy humanoid, which had walked past the aircraft.”

This is a Northrop F-5 aircraft:

This is a second eyewitness account which they quote:

“I also heard about an incident involving two mechanics, working on an aircraft parked on the north side of the base, one of whom was so frightened by the appearance of a strange hairy creature that he jumped into the cockpit of the aircraft and refused to get out for some time.”

It is entirely impressive that the two co-authors should then discover a third corroborative tale about two USAAF personnel:

“Sergeants Randi Lee and Jackson…. one night, while on patrol with their two dogs, they saw some movement near the towers and called the Main Gate to check if any workmen were still on-site…. As they approached the tower, they came face-to-face with a hairy figure. The dogs stopped in their tracks, absolutely terrified, frantically trying to get away…..The truck arrived just in time to see the creature, whatever it was, climbing over the security fence, where it was last seen entering North Woods.”

It is difficult to imagine how much more thorough these two authors could have been at this point. They manage to find yet another witness to this bizarre tale:

“One foggy night my father received a radio call; there was an intruder within the perimeter…. He tore out in his truck and sped towards the scene…. Seeing a figure in the fog, he pulled over, thinking it was one of his guards. He rolled down his window and was screamed at, full in the face, by what can only be described as a man-like, bipedal creature. My father nearly wet himself in fear. In an instant the thing ran off at incredible speed and my father drove after it. Within moments it had sped past another of the guards….my father and these men witnessed this creature make fantastic, running bounds across the grounds before leaping over two tall, well-spaced barbed wire fences in a single bound. It disappeared into the surrounding woods.”

Many similar and confirmatory accounts can be found on the Internet of this interesting, yet frightening creature. Just as I have quoted John Hanson and Dawn Holloway, some of the websites are clearly redolent of Nick Redfern’s blog post of 2007, “Do Werewolves Roam The Woods Of England?”
One of the contributors, a gentleman who calls himself “wes” recounts his own version of the Alconbury creature:

“I encountered a werewolf (lack of better description) in England in 1970, I was 20 years old when I was stationed at RAF Alconbury. I was in a secure weapons storage area when i encountered it. It seemed shocked and surprized to been caught off guard and I froze in total fright. I was armed with a .38 and never once considered using it. There was no aggression on its part. I could not comprehend what I was seeing. It is not human. It has a flat snout and large eyes. Its height is approx 5 ft and weight approx.200 lbs. It is very muscular and thin. It wore no clothing and was only moderately hairy. It ran away on its hind legs and scurried over a chain link fence and ran deep into the dense wooded area adjacent to the base. I was extremely frightened but the fear developed into a total commitment of trying to contact it again. I was obsessed with it. I was able to see it again a few weeks later at a distance in the wooded area. I watched it for about 30 seconds slowly moving through the woods”

At the website “Winter Spirits” a person called “earth_spirit” recounts how he too was in the RAF:

“In 1978 I was stationed with the US Air Force in West Germany and was sent to RAF Alconbury in England for a 30 day TDY (temporary duty.) When I mentioned to a co-worker I was going to RAF Alconbury, he told me that he had been there in 1972 when one of the aircraft mechanics in his squadron had been found late one night in the back seat of an RF-4C Phantom jet, supposedly after he had died of “fright.”  The story was that a subsequent investigation revealed unexplained scratches on the glass of the canopy of the jet, and this started a rumor circulating that the unfortunate crew chief had been the victim of what came to be known as the infamous “hard stand monster.”

You could be forgiven for misinterpreting the “hard stand monster” but clearly, there is something behind these stories.

In a fascinating blog, well worth a look, written by Sarah Hapgood and entitled “sjhstrangetales”, the testimony of yet another witness is quoted:

“Dennis Prisbrey, stationed here between 1973/5, told of colleagues seeing a “creature” near the north side of the airfield. One sighting of it scared a colleague so much that he jumped into the cockpit of an aircraft and refused to get out. The creature was also seen climbing over the security fence, and entering the North Woods. Wesley Uptergrove also saw it, and said he tried to pursue it in a truck. He described it as 5ft 9″ tall, with human-like eyes, a flat nose, and large ears.”

With so many websites discussing the unusual, the ghostly and the frightening, it is again just a matter of establishing some kind of average between the many repeated tellings of what is obviously the same incident. One intriguing explanation is offered by Nick Redfern with the full backing of Linda S.Godrey. Clearly based on the fact that these werewolves are often seen near military bases, it is well worth five minutes of your time. This individual is my favourite. He looks as if he waiting for his library book to be stamped:

Whatever happens though, you could do lot worse than to take a look at the many volumes of “Haunted Skies” by John Hanson and Dawn Holloway. They are an unbelievable set of books, although “unbelievable” is perhaps not the best choice of words when discussing UFOs.

14 responses to “A Werewolf in Cambridgeshire. Run away!!”