Caretakers? The people who take care of us : Part Three

This is the third section of an eventual four, all of which tell the story of the remarkable characters who have worked as caretakers at the High School over the last 150 years.

In July 1950, Miss S.J.Webb, a teacher who was retiring after 23 years’ service in the Preparatory School for Boys from 7-11 years of age, had her “Memories of the Old Preparatory” published in the School Magazine:

“When I came in 1917, there were four Forms, 1A, 1B, 1C and 1D, and they occupied the four front rooms of houses No. 9 and No. 11, Miss Richmond was in charge and she and I lived in No.11. Mrs. Richardson was caretaker and as there was no dining hall, she provided dinner…for about twenty-two boys from the senior school. Her dinners soon became very popular, especially her puddings of which there always seemed an unfailing supply, and which were of a kind that usually finds favour with a hungry boy. The Prep. boys went home to dinner. This was possible as we had a very long dinner hour and in those days meat coupons had to be given up at each meal where meat was provided. Talking of caretakers, I can see old Holmes, caretaker of the big school, going down the steps and jangling a bunch of keys, calling out to the boys : “Doctor’s orders is . . .” (referring to Dr. Turpin, the Headmaster). His hobby was birds and his house seemed full of them:

He lived in the house now occupied by Mr.Ings on Waverley Mount, only it looked very different then. The Old Prep. was a very happy, busy, place and yet how leisurely compared with to-day! (1950)”

When Robert Holmes, the school’s eccentric and beloved caretaker, retired in the early 1920s, the following poem appeared in “The Nottinghamian”, in celebration of  an individual who was universally known as “Robert”. Almost totally deaf, and a great favourite of the boys, Robert was well-known for his poems, which he would pay to have printed, and then distribute himself around the school, to both boys and staff. In this way, for example, he celebrated the end of the Great War. Most unfortunately, few of his poems appear to have survived to the present day, although it may well be that the following effort, by “FROG”, is in the style of the great man. It starts by expressing the writer’s regrets at having eaten too many little cakes in Robert’s tuck shop:

I.
Ah ! Robert, would that I could be
As free from pain as when
I had not yet gone on the “spree”
In thine enticing den!
When I did buy a penny cake.
And had a joyous chew,
I little thought that tummy ache
Would make me want to – – – – !
II.
And yet I curse my cruel fate
That I must parted be
From thee. O man of mighty weight
Who bid’st “good-day” to me
When up the steps of N.H.S.
At one past nine I race…..
Thou let’st me in, so heaven bless
Thy brightly beaming face,
III
In heat, in cold, in wet, in dry,
I hear thy morning bell
And sometimes if I’m lucky, I
Get in, and then all’s well:
But oft I’m late, and then, Ah Woe!
With fifty lines I’m vexed,
Or in detention have to go –
(Yes muse? Thank you for next.)

IV.
My muse forsakes me wherefore here
Mine eloquence I’ll stay;
Before I go away
May Allah ever champion thee,
And bless thy kind old heart —
Yes, Robert ? Doctor’s orders, eh?
All right, I will depart!

This cartoon of Robert appeared in “The Nottinghamian” in July 1922.  It was his job to ring the school bell: 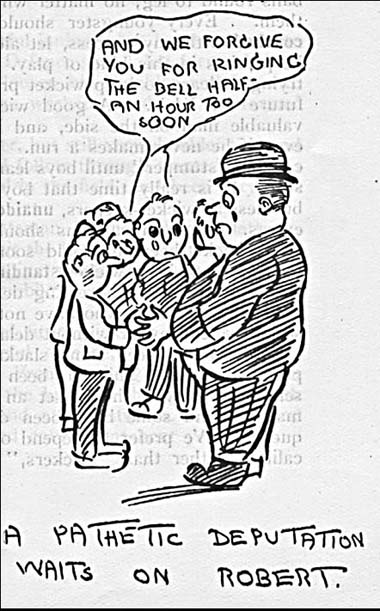 In 1923, sadly, both Robert, the School Caretaker, and his wife passed on. Robert had always been a writer of very vivid letters, and, as we have seen, he wrote much poetry. This is how he celebrated the early days of the Cadet Corps…

“If you look through them gates
You’ll see Captain Yates
A-drilling of boys by the score.
So come on, my lads,
Get leave of your dads
And join the High School Corps.”

This seems to have been the only single one of Robert’s celebrated poems to have survived. It is extremely reminiscent of Pam Ayres, a very successful poet of the 1970s and 1980s.

During this period in the 1920s, many boys used the extensive rail network which criss-crossed the county at this time. Local stations included the Victoria Station, from which there was a long and tiring trudge up a never ending hill to the High School, firstly along Shakespeare Street and then up Waverley Street. Here is the long demolished station:

Quite often, the boys who were late would be able to hear the caretaker distantly tolling the school bell, and this event was later to be described by a great author,  D.H.Lawrence himself.  Another station which many boys used to use was on the far side of the Forest, at what is now the eastern end of Gregory Boulevard. Those boys could then make use of the many footpaths which came up the hill towards the school, around the back of the Church Cemetery. The “Train Boys” of course, were continually subject to the vagaries of the railway system, but, at the same time, they were famed for their ability to use this to explain away their extreme lateness, absence of homework etc. etc

On the evening of Tuesday, June 16th 1925, a simply dreadful event occurred.  Mr.Hallam, the School Caterer, shot and killed a fox. the so-called “Mrs.Reynard”, and surely one of Nottingham’s first ever urban foxes. This cruel man provided a very sharp contrast with Robert Holmes, the Caretaker,who had loved all of God’s creatures.

The fox was a vixen who had been a particular favourite of the senior boys and who had introduced them to “unknown parts of the shrubbery”, in front of the school, where they had been able to take a keen interest in her activities. One prefect had even ruined his trousers by following her through the dense undergrowth:

One day, however, the fox went too far, and allegedly attacked the School Caretaker’s cat. The School Caretaker then asked Mr.Hallam, the School Caterer, for help, and the latter turned up one evening “in the playground armed to the teeth with a gun and two tame rabbits.” The staff and their wives, playing on the tennis courts, were then rather amazed to see Mr.Hallam leave the two tame rabbits on the lawn and await developments. Sure enough, the fox soon arrived, attempted to eat the rabbits, and was promptly shot dead.

The “Shrubbery” was a dense jungle of vegetation at the front of the school at this time. Nowadays, it has been opened up and gentrified somewhat, as the Lower Lawns. The jungle certainly appears thick enough to allow naughty boys, or naughty young men, to smoke a cigarette or two in there at break. This old postcard shows just how dense the foliage was: 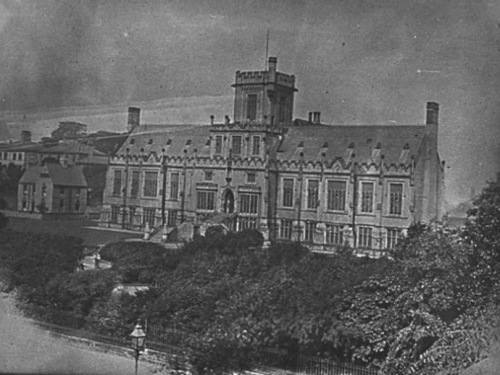 This article will be concluded in the near future.

11 responses to “Caretakers? The people who take care of us : Part Three”