On Saturday, July 8th 1944, Old Nottinghamian, Lieutenant George Colin Brown, was killed in action during the aftermath of the D-Day landings. He was just 24 years of age. Lieutenant Brown was in the 2nd Battalion of the Lincolnshire Regiment (3rd Infantry Division). He is buried in the War Cemetery at Ranville near Caen in Calvados, Normandy. This cemetery houses some 2,567 war casualties.

Here is the church tower:

In actual fact, Ranville was the first village to be liberated in France.

George Colin Brown was born on February 22nd 1921. His father was WA Brown, a Schoolmaster of 10 Grove Street, Beeston. He entered the High School on September 16th 1932 when he was eleven years of age and immediately became a member of White’s House. He obtained his School Certificate in 1936.

At the High School, George was a keen cricketer, and the school magazine reported poignantly that his “fast in-swinging yorker on the leg stump was devastating on its day”:

George had appeared for the 1st XI in 1936, 1937 and 1938. I have only been able to trace the exact details of just one single game that George played in. On May 29th 1937, therefore, he appeared in a fixture at Valley Road against King Edward VII School, Sheffield. The High School scored 77 all out, but Sheffield managed a narrow win by two wickets, with their score of 80 for 8. George scored nine runs when he batted and was bowled by Fletcher. We do not know exactly what type of bowler he was, but his performance was eminently successful, taking three wickets for 28 runs. His performance was bettered only by GF Palmer, who took three wickets for only seven runs.

Boys still learn to play cricket down on the cricket pitches at Valley Road. Almost eighty years after George used his “devastating fast in-swinging yorker on the leg stump”, games against other schools are still won, drawn and lost, all in that same spirit of good sportsmanship that George would have recognised:

Overall, though, his “fast in-swinging yorker on the leg stump” must have been very effective. In 1938, George took six wickets out of ten against Burton Grammar School and conceded a paltry fifteen runs. Later in the same season, he exceeded this with a haul of seven wickets for twenty runs against Stamford Grammar School. During that distant summer of 1938, he played exceedingly well because in total George took 45 wickets at a cost of just 6.42 runs per wicket. This was the best performance by a High School bowler during the season, in which the First Eleven was victorious in six matches out of twelve. Opponents included such old friends as Forest Amateurs, Notts Amateurs, the Old Nottinghamians, Ratcliffe College, Stamford School and Trent College, left hanging on at 50 for 3, chasing a winning total of 162.

When George Brown played down there at Valley Road, just before the war, a gigantic tree stood very close to two of the pitches. Alas! It was blown down in the great hurricane of 1987. It used to stand on the grass, perhaps directly in front of the house on the left. As I mentioned, it was close to two of the cricket pitches, so not one but two teams would wait to bat under its canopy of leaves : 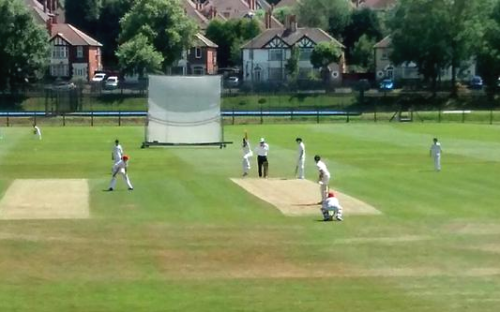 I have been unable to trace any exact details of poor George’s death, but I suspect it was in the battle to control Caen, as the Allies moved inland after D-Day.

A website which details the entire war day by day says:

“On July 8th 1944, a major British and Canadian attack began around Caen. 2,726 tons of bombs were dropped by 450 RAF bombers overnight as part of the preliminaries. The battleship HMS Rodney delivered hundreds of 16-inch shells. US forces coordinated an attack to the west. British and Canadian troops entered the outskirts of Caen, only to find SS Colonel Meyer’s Panzer tanks still firmly established outside the city.
The citizens of Caen stayed huddled in their cellars while the Germans stubbornly held out. Hitler had ordered that every square kilometre should be defended to the last man, but the Allies managed to penetrate into the very centre of the ruined city along the north bank of the River Orne. There they were stopped by Meyer’s men. In a month of battles, every single one of Meyer’s battalion commanders was killed and he received no replacements. Meyer wrote in his diary:

“My officers and men all know that the struggle is hopeless, but they remain willing to do their duty to the bitter end.”

That is the point of view of an apparently honourable man but ultimately, it was pointless fanaticism, which may well have resulted in the death of another honourable man, George Colin Brown, at only 24 years of age.