“The only thing necessary for the triumph of evil is for good men to do nothing.” is a famous quotation attributed to Edmund Burke, the statesman, author, orator, political theorist, and philosopher.
A good example would be this photograph showing the England football team just before a friendly game at the Olympic Stadium in Berlin on May 14th 1938: 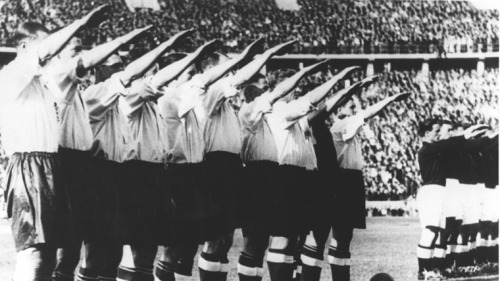 The fixture was played before a crowd of 110,000 people, but clearly, the Englishmen are not waving to their German admirers. This is the Hitler-Grüss. The English players are all saluting Adolf Hitler, arguably the most evil man ever born. Why did the footballers do this? Surely they were good men? Why did they do nothing? Or was Stanley Matthews, a hero to millions of young boys, an evil man?
Well, the truth of the matter is that the British Foreign Office had actually ordered them to salute the Führer, Adolf  Hitler.

Six months before, Naughty Hitler had marched his armies into Austria, the home of the waltz and the cream cake, and annexed this defenceless little country, the so-called “Anschluss”.

The Foreign Office wanted to assure Hitler that, even though he kept invading places, Germany was not a “pariah” state. Hopefully, if Adolf was kept sweet by an England team which saluted him, he would look favourably on Neville Chamberlain’s government and their policy of appeasement:

“You’re very naughty, Adolf, but as long as you promise it’s the last time, we’ll overlook it.”

The “Peace in our Time” deal must go through.
Germany’s football team was very weak at this time, but Austria’s was not. In 1934, they had finished fourth in the FIFA World Cup, and in the Berlin Olympics of 1936, they had finished second, losing to fascist Italy in the final. Austria qualified for the 1938 World Cup, but on March 28th 1938, they were forced to withdraw as the country no longer existed. The theory was that after Anschluss,  the Austrian players would all play in the German team.

First though, the two countries would play a last match for Austria, a “reunification derby” which would unite the two countries and their respective football teams for ever. Not surprisingly perhaps, the game was planned to finish as a draw. The Austrians, though, all of them good men, would not stand idly by and do nothing, but instead they scored two goals in the last few minutes in a successful  effort to win the game and put the Nazi noses out of joint.

To humiliate the Germans even further, the Austrians’ absolute star player, the thoughtful Matthias Sindelar, scored one of those two Austrian goals, and then celebrated extravagantly in front of the senior Nazi dignitaries watching the game. The latter already knew about the kit controversy. Both Germany and Austria usually played in white shirts and black shorts, but Sindelar, for what he thought would be the country’s last ever game, had insisted on Austria playing in the same colours as the national flag, red shirts, white shorts and red socks. Red, of course, was not a particularly favourite colour of the Nazis.

Here he is. Matthias Sindelar. He was so thin, so pale and fragile, that his footballing nickname was “The Man of Paper”. He was, though, a good man who refused to stand idly by. A real “Man of Steel”: 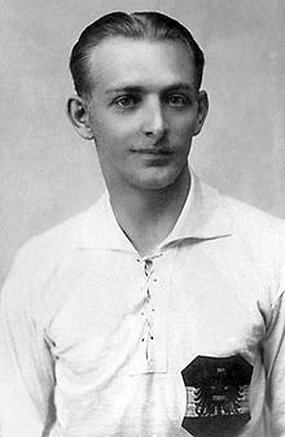 At the very end of the game, Sindelar deliberately and obviously missed an easy chance which would have made the victory an even wider one. Afterwards Sindelar refused to play for the German Reich, giving either his extreme age of 35 or injury as an excuse. 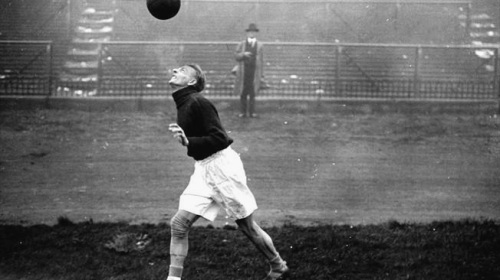 Not totally surprisingly, perhaps, Sindelar was dead within the year. He died on January 23rd 1939. By now he was a symbol of Austrian patriotism, and his Gestapo file listed him as being pro-Jewish and a Social Democrat. The Gestapo also watched his café twenty four hours a day.

No wonder, therefore, that the heating system in his flat should fail, the problems allegedly being caused by a defective chimney. As he lay in the arms of his girlfriend, Camilla Castagnola, therefore, they both died of carbon monoxide poisoning.
That Sindelar’s death was a suicide as a protest against the German Anschluss of Austria was suggested by, presumably, pro-Gestapo elements, but that was just not true. Decades after the event, we now know, thanks to the confession of Egon Ulbrich, a lifelong friend of Sindelar, that a petty local bureaucrat was bribed by the Nazis to record his death by Gestapo as a mere accident. Here is Sindelar’s grave, still visited regularly by many people today: 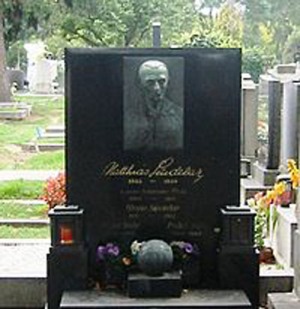 Matthias Sindelar is one of my favourite players.

He had played centre-forward many, many times for the Austria team of the 1930s. They were known as the “Wunderteam”, and Sindelar was their captain at the 1934 World Cup, where they were cheated out of it in the semi final by match referee Eklind. Austria’s phenomenal goalscorer, Josef Bican, (at least 1468 goals in 918 games) maintained all his life, until he died in 2001, that Eklind had taken cash inducements from the Italians. And Bican was perhaps justified in his belief. On one occasion during the match, he passed the ball out to the Austrian right winger only to see it intercepted and headed down to an Italian….by the referee!

Here is one of the few pictures of the game. Some nice cotton wool seems to have been provided for the Italian goalkeeper to stop him getting bruised: 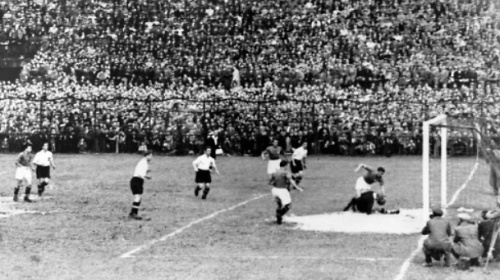 Sindelar was one of the greatest footballers of the decade, famous for his fantastic dribbling skills and the creativity of his passing. He had two brilliant nicknames. We know already what “Der Papierene” means. The “Man of Paper”: 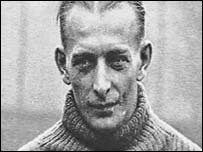 But Sindelar’s precocious skills would also lead to his being called “The Mozart of Football”. 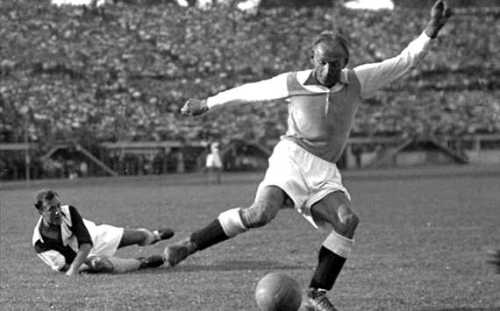 In 1999, Sindelar was voted the best Austrian footballer of all time. He had already been named Austria’s sportsman of the century a year before. Sindelar even now, is still ranked as the world’s 22nd best ever footballer. Overall, he scored 26 goals in his 43 matches for Austria, and won one Austrian championship with SV Amateure in 1926, two Austrian Cups with Amateur-SV in 1925 and 1926, and three with FK Austria Wien in 1933, 1935 and 1936.

There was no European Cup then, but Sindelar won one of its predecessors, the Mitropa Cup or Central European Cup in 1933 and 1936 with FK Austria Wien. 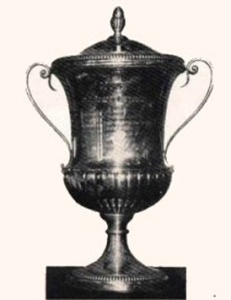 In 1932, he won the Central European International Cup, a predecessor of the UEFA European Championship.
Participants were Austria, Czechoslovakia, Hungary, Italy, Poland, Romania and Switzerland.
Matthias Sindelar was certainly one who did something to prevent, or at least, slow down, the triumph of evil. And ultimately, he paid with his life.