The Oldest Old Boy of Them All (1)

Many, many years ago, in 1990, my friend and colleague, Simon Williams, interviewed Roy Henderson who was then one of the oldest Old Boys still alive.  In due course, I transcribed the taped interview and added some extra explanatory details of my own where this seemed helpful to the reader.

This is the first section of an eventual five, all of which describe the High School just before the outbreak of the Great War, and then during the first few years of the conflict.

Here is the High School around this time. Notice at least four boys in the picture, including one sitting down on the edge of the tennis court:

Roy Galbraith Henderson arrived in the High School Preparatory Department in January 1909. He had been born in Edinburgh, although he had not lived there since the age of three. Given his Scottish background, he arrived at the school wearing a kilt. This proved not to be the wisest of decisions, since he was immediately picked on by two older boys called Jaffer and Dodds, both of whom were at least a foot higher than he was. On many occasions in the future, he was to have water poured down his neck by these two bullies.

The Head of the Preparatory Department was Mr Leggatt, who was one of the very first to volunteer to go off and fight in the Great War. The main game in the school playground at this time was called “relievo”. It was a particularly thrilling game to play in one of the era’s many dense fogs.

In the First Form, the form master was called Mr Radley, or “Pot-eye”. He always used to get the boys to begin work with a loud cry of “pens up!”. They would then write “like the blazes”, before the call of “pens down ! ”. Mr Radley is the third person from the left on the front row:

In Form 2a, “Nipper” Ryles was a very good master, and was thought to be one of the very few who did not possess a degree. Here he is: 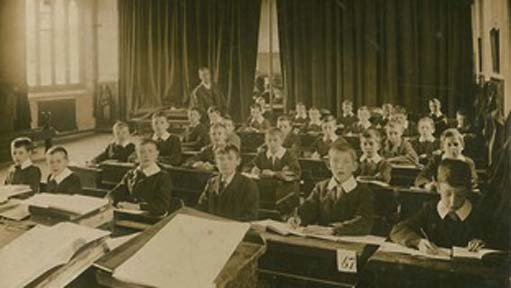 In the following year, in Form 3a, his brother, “Jumbo” Ryles, however, was “terrible, absolutely hopeless”. He used to have his feet up on the front desk all the time, and would practically go to sleep. The Drawing Master used to poke his nose around the door, and wake Jumbo up with a gentle cough. The latter would then rouse himself, and say to the class “Now get along there! Get along there! ” Jumbo’s teaching technique was to line boys up in a row for a series of questions. If they were correct, they would stay where they were. If they were wrong, they would go back to the end of the queue. This cartoon dates from just before “Jumbo” retired:

In the Fourth Form, Mr Lloyd Morgan went to serve at the front during the middle of the school year, shortly after hostilities began. He was replaced by Mr D’Arcy Lever, who was the butt of many jokes, and found the boys extremely difficult to control. They made a lot of fun of him. Later in the conflict, retired teachers had to return to the school. Mr Trafford took over 3c, the worst form in the school, who were famed for their ability “to play up a lot”.

In Form 5a, Mr Brock was a “very nice chap, and very popular”. Everyone liked him very much. The Classical Sixth was looked after by Mr Strangeways.

In the yard, games tended to be played by years. In Form 1a, for example, everybody always had pockets full of marbles. They often played in the covered sheds near the Forest Road entrance.

The yard also had two Fives courts, one of which was covered, and the other was left open to the elements.

To the left as one entered the playground via the Forest Road entrance, there was some extremely dirty sand.

This was used as a football pitch, with rough and ready goalposts at either end. Every year, around Easter, a competition was held among teams of eight players, each one of which was captained by a different member of the First Eleven. In 1913, Roy played in the winning team, which was captained by James Ivor Holroyd. On October 30 1917, Holroyd of the 1/28th London Regiment was to be reported missing, presumed dead, in the Second Battle of Passchendaele, at the age of only twenty one.

Form 2a enjoyed a game called “rempstick”. A member of one team would stand with his back to the wall, while one of the other members of his team stood with his head between the first boy’s legs. The next team member would then put his head between the legs of the second boy, and so on, until a long caterpillar-like scrum structure was formed, just one person wide. The members of the other team then took a long run-up, and, one by one, jumped onto the top of the human caterpillar. If they caused a collapse, then their team was allowed to have a second go. If the caterpillar held up, then its members were allowed to do the jumping:

In Form 3a, the main game was football, which was played on the left hand side of the playground. looking from the Forest Road entrance, right at the very far end. In Form 4a, football was played again to the left, but not as far along as in the Third Year.

The Fifth Form played their football under cover in the sheds along the Forest Road wall, kicking the ball against the wall in an effort to get past their opponent. Among these boys, Lancelot Wilson Foster was remembered as a particularly good full back.

The Sixth Form spent most of their free time just walking and talking on the lawns at the front of the school:

Nobody was ever allowed inside the school during breaks, but it never seemed to rain!  In any case, all the boys were always very keen to get out of the building.

There were few facilities for the boys, including just six to eight cracked stone washbasins. There was a tuck shop, near the south eastern corner of the present day West Quadrangle. It was run by Robert, the School Caretaker. The small shop which boys at the end of the twentieth century called “Dicko’s” was at this time called “Baldry’s”, and it was a sweet shop. A female member of staff, a Mrs Digblair, lived above it. She was one of the school’s first ever mistresses, and members of the Sixth Form loved to go and have tea with her.

Finally, my own footnote on Mr Radley. He was a teacher with what would nowadays be considered ideas before their time. He loved literature, art and music, and taught the boys about understanding and peace among mankind. Indeed, this was perhaps not particularly surprising for a man who knew French, German, Italian, Russian and Welsh. On one occasion, he brought an Egyptian into school to show his pupils that there were “other men than Englishmen and other creeds than Christianity.” His obituary in the school magazine ended with the words “Goodbye, Mr Chips!”

This article will be continued in the near future.