Today marks the 100th anniversary of that enigmatic character, Albert Ball. Nowadays, perhaps, Albert Ball is pretty much a forgotten name. He was, however, one of the greatest air aces of the Great War:

Albert was a natural fighter pilot, and initially, he always flew French Nieuport fighters (with a top speed of 110 m.p.h.): 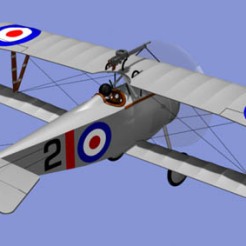 This is a painting  of Albert’s very own Nieuport:

As well as the French fighter though, the English S.E.5 with its top speed of 138 m.p.h. was to hold a huge place in Albert’s affections in the latter period of his career: 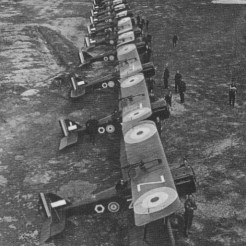 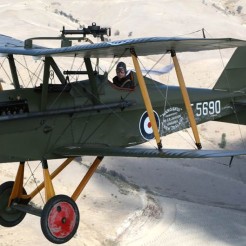 Unlike many of his colleagues in the Royal Flying Corps, Albert gained widespread public fame for his achievements. In general, unlike the French or the Germans, the British did not use their aces for propaganda purposes, but Albert was the first brilliant exception. Almost like a medieval knight of the air, Albert shot down 44 enemy aircraft. In today’s world he would have been, quite simply, a superstar.

Albert was genuinely fearless, and the war weary English public of 1917 loved the way he flew alone, like a Knight of the Round Table, and always attacked the enemy aircraft, irrespective of the odds against him.  His favourite prey was the German Roland C.II, the so-called “Walfisch”: 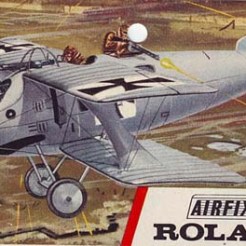 Most of Albert’s victories came by attacking enemy aircraft from below, with his Lewis machine gun tilted upwards. It was very dangerous but, like the Schräge Musik cannons of a later conflict, was remarkably successful.

Flying without any other aircraft to support him, Albert was always going to be vulnerable, and he was finally killed out on patrol on May 7th 1917, shortly before his twenty-first birthday. For this last combat, Albert was awarded a posthumous Victoria Cross, to add to his Military Cross, Distinguished Service Order, Distinguished Flying Cross, Légion d’Honneur, Croix de Chevalier, Russian Order of St George and the American Medal. 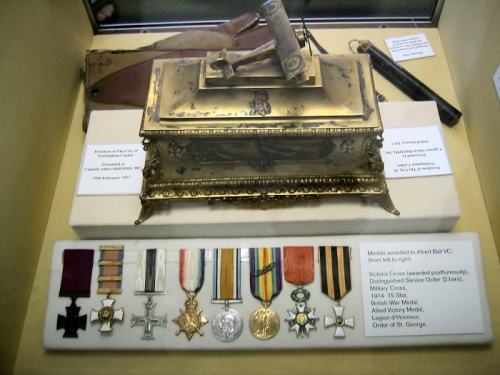 These medals can still be seen inside Nottingham Castle. Outside, in the gardens, is his statue:

His battered uniform has been carefully preserved: 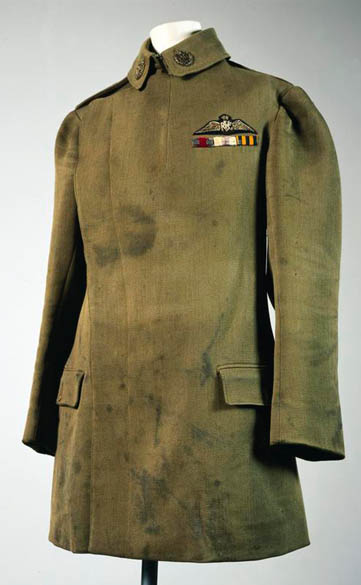 And so has his shattered windscreen:

On a more scurrilous note, Albert was always one for the ladies and every photograph of the dashing hero seems to have him with a different young lady in tow. In some of his biographies he is credited with having left an unknown, but relatively sizeable, number of the young ladies of Nottingham in, shall we say, a very interesting state.  Indeed, it would be interesting to know if anybody nowadays claims kinship with this dashing young man.

Albert was born on August 14th 1896 at the family home at 301, Lenton Boulevard (now 245 Castle Boulevard), Nottingham. He was the third child, and elder son, of Albert Ball and his wife, née Harriet Mary Page. A few years afterwards the family moved to Sedgley House, 43 Lenton Avenue, The Park, Nottingham, where they lived in a moderately wealthy fashion:

Albert had a brother Cyril and a sister Lois. Their parents were always “loving and indulgent”. Albert Ball Senior had originally been a plumber, but he was an ambitious man and became an estate agent, and then a property speculator, as his fortunes improved. He was to be elected Mayor of Nottingham in 1909, 1910, 1920 and 1935.
As a boy, Albert was interested in engines and electrics. He had experience with firearms and enjoyed target practice in the garden. Thanks to his wonderful eyesight, he was soon a crack shot. On his sixteenth birthday, Albert spent a lovely day as a steeplejack, as he accompanied workmen to the top of a tall factory chimney. He was completely unafraid and strolled around, not bothered in the slightest by the height:

Albert’s education began at the Lenton Church School. He then moved, along with his younger brother Cyril, to Grantham Grammar School, which had a military tradition that stretched way back into the Napoleonic times of the early 19th century, well before the establishment of other schools’ Officer Training Corps, or Combined Cadet Forces.

Albert moved to Nottingham High School on Thursday, September 19th 1907 at the age of eleven, as boy number 2651. According to the school register, he was born on August 17th 1896, although on his birth certificate, the date is certainly given as August 14th. Later in life, Albert was to countersign a certificate from the Royal Aero Club on which his date of birth was written as August 21st. His father is listed in the High School register as Albert Ball, a land agent of 43, Lenton Road, Nottingham.

Albert did not last a particularly long time at his new school, as he was to be expelled for bad behaviour in 1910. Contemporary sources reveal that Ball particularly enjoyed misbehaving in music lessons:

“The Third Form music master was a Mr Dunhill, who had one eye which was straight, but the other looked outwards at an angle, rather like half past ten on a clock. Boys always used to make fun of him. Whenever he shouted “Stand up you ! ! ! ” and looked at a certain naughty boy, four others would get up elsewhere in the room. “NO !  NO !  NOT YOU !! …YOU ! ! ” The original four would then sit down, and another four completely unrelated boys would stand up elsewhere in the room.
Albert Ball specialised in misbehaviour during these singing classes. He and his brother would invariably “kick up a terrible row”, and were then sent out of the room.” 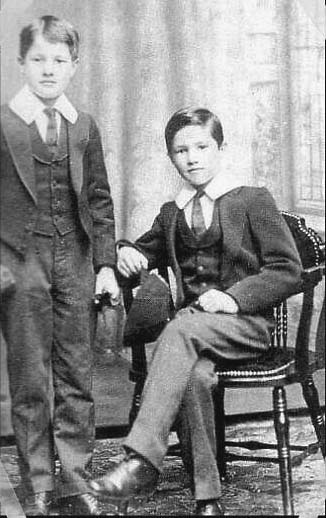 According to one Old Boy from just a few years later, however, Albert’s actual expulsion came from:

“an incident which took place at morning prayers. Ball took in with him a huge bag full of boiled sweets. At one point it was allowed to burst, and hundreds and hundreds of sweets were all dropped onto the floor. The whole school assembly then became one seething mass of boys, all scrabbling about on the floor, “heads down and bottoms up, completely out of control ”, trying to pick up as many sweets as they possibly could.”

That did not necessarily mean, however, that Albert misbehaved with every single teacher. The Chief History master, C.Lloyd Morgan, was to recollect in later years:

“I think I taught Albert Ball but can’t recollect him.”

Albert moved next to Trent College, where he was a boarder. He was only an average student, but he possessed great curiosity for everything mechanical. His favourite lessons were therefore carpentry, model making, playing the violin and photography. He was also a member of the Officer Training Corps:

Albert eventually left Trent College at Midsummer 1913. His stay there seems to have been for the most part relatively happy, although it was not always a totally enjoyable experience, by any means. On at least one occasion, for example, the unhappy young Albert is supposed to have run away to sea, and he was only apprehended at the very last moment:

“covered in coal dust, in the engine room of an outgoing steamer”.

Whatever Naughty Albert’s long forgotten negatives, though, there is something genuinely cool about being featured on your very own stamp. As far as I know, Albert is the only Old Boy of the High School to have achieved this:

During his career, Albert secured 44 victories over enemy aircraft with a further 2 unconfirmed.  Nobody can fight alone for ever, though. After just 13 or 14 months of combat flying, Albert was killed.

The end came 100 years ago to this very day. I have tried to schedule the appearance of this post so that it is published to celebrate this anniversary.  There is no clear indication of what happened in his last combat although four German officers on the ground all saw his SE5 emerge from low cloud, upside down, and trailing a thin plume of oily smoke. Its engine was stopped and the plane crashed close to a farm called Fashoda near the village of Annoeullin. Albert was still alive and he was removed from the wreckage by Mademoiselle Cécile Deloffre. As she cradled him in her arms Albert opened his eyes once and then died. His death was later found to be due to his injuries in the crash. He had not been wounded.  The chivalrous Germans gave Albert a funeral with full military honours on May 9th. The original white cross with which they marked his grave, No.999, is still kept in the chapel at Trent College.

Albert’s father, Sir Albert Ball, was eventually to become Lord Mayor of Nottingham. After his son’s death, he bought the land where the crash had occurred. When he died in 1946 he bequeathed it to the inhabitants of the village to farm and to keep the memorial in good condition: