Imagine that it is the height of a glorious summer, in southern Derbyshire in 1937. My Dad, Fred Knifton is only 14. One day, with his friends, Jonty Brearley, Bernard Swift and John Varty, he sets off to cycle through the Anglo-Saxon village of Hartshorne, to explore the old Stone Age trackway of Green Lane. By the time they get there, it is the late afternoon of a glorious summer’s day.

Last time, we saw the arrival of PC B–stard on his bike who forbids the four Boy Scouts to camp on common land at the side of a public footpath several miles from the nearest house. Sadly the boys did not rise up and drive off this sad servant of the bourgeoisie but instead promised that they would leave before nightfall.

Their brightly burning campfire gleamed in the dusk: 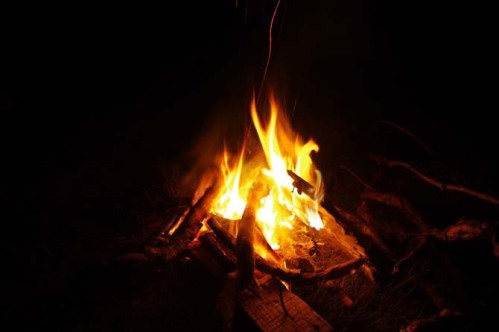 The boys, still filled with their spirit of youthful adventure, sat happily around the dancing flames. They roasted the sausages they had brought wrapped in grease proof paper in their saddle bags: 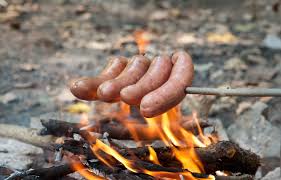 They toasted bread which was nothing like the bread we are told to enjoy nowadays. They made cups of scalding hot tea. And then, as night grew so dark that they could hardly see either each other or the bats which flickered through the invisible branches of the barely visible trees, they packed up all their things into the panniers on their bicycles.  Slowly but purposefully they cycled back under the stars through the warm summer darkness to the continuing years of their lives.

Fred was to say many times afterwards, that all four of those happy boys went off to the Second World War, but only two were destined to survive that awful conflict. Bernard Swift and himself.

John Varty was killed in 1943 in Tunisia, fighting ferociously against Germans who claimed every single sand dune as their own.  Corporal Varty is buried somewhere out there. Somewhere on the road to Teboursouk. Somewhere where his mother and father never had the money to go. Somewhere where nobody with any sense would dare nowadays to go. A country where only the dead are beyond killing: 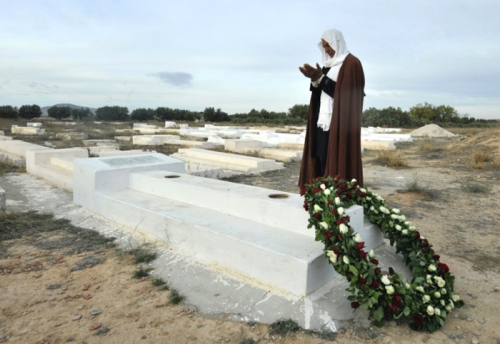 Jonty Brealey was killed on June 27th 1944, in some long forgotten episode in the aftermath of D-Day. He was buried, along with more than 4,000 others, in Bayeux Cemetery in Normandy. He died to liberate France but for the first 25 years of his life, I can’t imagine that he had ever seen a Frenchman. Or a German come to that.

When I was a little boy in the 1950s, my Granny and Grandad lived two houses up the road from the Brealeys.  Jonty’s father, whose first name was Alf, was by now an old man. He spent all of the day leaning over his front gate, saying hello to passers by and keeping his eyes open for people coming down the hill from the main bus stop on High Street. I thought as a child that he was looking for anybody who might come past, but I now realise as a man, that he was waiting patiently for just one special person who, alas, would never come.