In for a penny, In for a pound : The Adventures and Misadventures of a Wireless Operator in Bomber Command (2)

When I wrote the first part of my review of the book “In for a Penny, In for a Pound : The Adventures and Misadventures of a Wireless Operator in Bomber Command” written by Howard Hewer, I had never written a book review before, so I suppose I can now say “Welcome to my second book review”.

Last time I mentioned how the author talked about his experiences in the RAF in Britain, but how he was then transferred to the Middle East, bombing the Germans and Italians with Vickers Wellingtons: 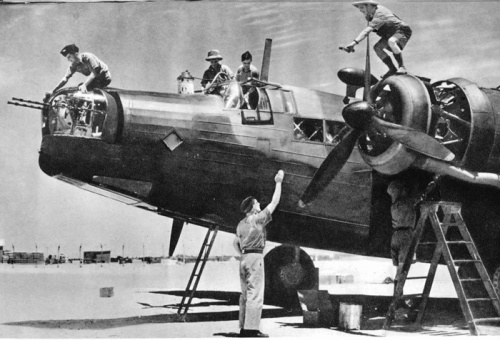 In actual fact the Wellington was probably the best bomber used in this theatre of war in the early years. At least they weren’t using these Bristol Bombays as bombers:

And they weren’t forced to use these biplanes as bombers, for want of any aircraft at all (which did actually happen!):

Howard Heyer describes how the anticolonial attitudes encountered in England continued in the Middle East when he is posted to RAF Kabrit near the Suez Canal:

At Kabrit, the Station Commander lived in a “sumptuous two storey permanent house”. The officers were all billeted in nice wooden houses next to the Officers’ Mess but the sergeants lived elsewhere, in the desert, sleeping on straw mattresses in tents outside the camp. The single shower was just a pipe with no showerhead and the water was heated by the sunshine. The food wasn’t very good either with the buns at Christmas dinner containing not caraway seeds but weevils, regarded by the rather cynical diners as a valuable source of protein. Here is the author, in the middle of the crew of five:

When the time came for introductions, the commander of the base, Squadron Leader B, singled the two Canadians out from the rest and said:

“I see that two of you are Canadians. I’ll tell you right now that if we have any trouble with you, it’s the high jump for both of you.”

Howard is flying combat missions at such long range that they need to land their aircraft at airstrips in the desert both on the way to the target and on the way back. That doesn’t prevent the station commander, who doesn’t fly in combat, stopping his car as he drives past Howard and telling him off for having a button which is not shined properly. Such attitudes eventually lead to a mutiny.

On January 29th 1942, Squadron Leader B had a notice put up ordering:

“All aircrew are to report, properly dressed, to the Station Warrant Officer’s Office at 1300 hours”.

Every member of aircrew had already “been on Ops” in the previous week and in some cases, the night before:

In such cases, men are supposed to have a whole day’s rest with no reporting anywhere. The fact that the Station Warrant Officer has the nickname, “Louie the Rat”, probably sums up the attitude of the 50 men who assembled. He told them to draw rifles for rifle drill. They told him that sergeants only carry side arms so they don’t do rifle drill. Louie then gave them the message from Squadron Leader B that the men were all slack and they all needed smartening up.

And the account goes on from there for another couple of pages. Again, something I have never heard of before, and, like the Cranwell Riot, unknown to Google as well. The book does have a good summary of the situation though, one which could have been applied to a good many RAF bomber squadrons during this period…

“…a long period of minor abuse and lack of caring, a condition of “negative leadership.”

Well, it can perhaps be summed up in the words of the officer who welcomed the crews to RAF Marham, right at the beginning of the book…

“Well chaps, the glamour period is over. Casualties in this command have been high, and they are on the rise as we make more and more flights further into Germany. I must tell you then that many of you will not be with us a few weeks or a month from now. Good luck to you all.”

Unbelievably, this officer was outdone by the Squadron Medical Officer:

“I hope it doesn’t happen to any of you, but in the event that you find yourself trapped in a burning aircraft with no chance of escape, best to get things over with in a hurry. Lean directly over the flames, open your mouth and inhale strongly. The fire should scorch the lungs and cause almost instant death, much preferable to burning slowly. Well good luck chaps.”

The Bomber Command men, all volunteers, of course, and a huge proportion of them from Australia, Canada and New Zealand, still got on those planes and did their jobs, often at the expense of their lives. The book concludes on a more positive note:

“I have never considered myself a brave man. But I was put into the company of brave men, and I could not very well have let them down.
I don’t believe I did.”

And my overall verdict? It’s a book very well worth a look especially if you can pick up a copy with a bit of history!

One final point I would like to make is that I had a minor operation on my hand recently and for that reason I will not be able to reply to any of your comments in the immediate future. If you do want to make a comment, by all means please do so, but I will not be able to write any replies until after December 6th as a minimum. After this date, with luck, I should be back in business.

30 responses to “In for a penny, In for a pound : The Adventures and Misadventures of a Wireless Operator in Bomber Command (2)”