The Mosquito at Cosford

An even more terrible joke, but according to my Dad, a genuine RAF joke from World War II. Well, I suppose they had to do something while they waited for Premier League football to be invented.

We went to RAF Cosford in April 2011.  Like Hendon, they too have a Mosquito.

This is TA 639, which is a Mark 35 Target Tug. The website explained that “After the war Mosquitoes continued in use as fighters until 1952 and others, including this example, were converted to tow targets for anti-aircraft gunnery practice.”

How sad. A Mosquito pulling targets. It’s like going into the park and finding your greatest sporting hero as a fat, helpless drunk, semi-conscious on a park bench.

Mosquitoes could do anything.

Here is a Pathé news broadcast:

And here is a film, almost an hour long:

In Operation Carthage, Mosquitoes could bomb the Shell House, headquarters of the Danish Gestapo, and destroy the buildings and the German records and release Resistance prisoners. Here’s a short video:

And a stretched version of 20 odd minutes

In a tragic twist, Operation Carthage went wrong and 86 schoolchildren and 18 adults were killed when a nearby school was bombed. I recently read a really good book about the Danish Resistance, “Hitler’s Savage Canary” and I must admit that the Danes of the time viewed events in a much more positive way than we would nowadays. Danes in 1945 seemed to consider the deaths an unfortunate price that had to be paid for a whole nation’s resistance network to survive.

The greatest of all Mosquito squadrons, although fictional, was 633 Squadron. Originally it was a book:

And you could name your own price for a mint condition film poster:

Here is just one of almost 250 videos taken from the film on Youtube….

Here are my photographs from Cosford. Here’s a general view. It seems to be painted as a bomber but I bet given half a chance it would be back with those targets, dragging them around the sky:

From behind it looks as if the mystery line has been omitted from this aircraft:

The great lumbering brute behind is an Avro Lincoln. I already did a post about this development of the Lancaster. Indeed, it was called the Avro Lancaster Mark IV until somebody pointed out that it didn’t look that much like a Lancaster.

Last look at the Mosquito. If only I could see one doing what it does best, rather than just sitting in a museum: 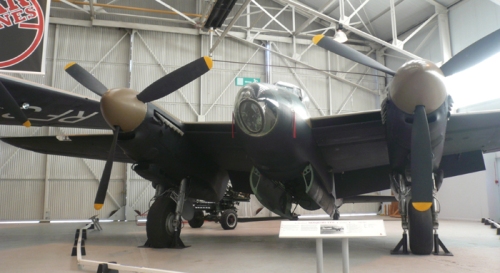 23 responses to “The Mosquito at Cosford”