Hedgecoe and Bamford : Death in the Night

I am currently carrying out research about the 100-odd Old Boys of the High School who gave their lives during World War II. Certain websites are very good for this, certain books are excellent but for really interesting details, it is always the “Forums” which take the prize.

I wonder if people realise that so many individuals, so many hundreds, if not thousands of people, spend their valuable spare time working away on their computers, trying to trace the fate, not just of their relatives, but of the young men or women who have captured their imagination.
I did some blogposts recently about the De Havilland Mosquito, and they reminded me of a trail which I followed a few months before that. The trail was started off, of course, by a story I came across on a forum.
Here are Flying Officer Edward Richard Hedgecoe (pilot), and Flight Lieutenant Norman Llewellyn Bamford (radar operator) in a photograph which I have borrowed from a search engine. On the original website it appeared by courtesy of Colin Bamford, so I hope it doesn’t cause a problem. I will obviously take it down if he wishes. 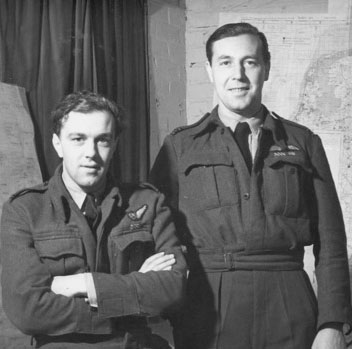 The two men were apparently involved in a strange incident during the night of March 24th-25th 1944. They were flying a Mosquito night fighter when, off the coast of Kent, they found an apparent Junkers Ju 188 weaving violently from side to side. In order to be certain of the rather exotic aircraft’s identity, they approached to within 100 yards’ range before they fired a long burst of cannon fire at it. This was the correct thing to do, of course, but not if the quarry aircraft suddenly explodes in a huge fireball. This is a Junkers Ju 188: 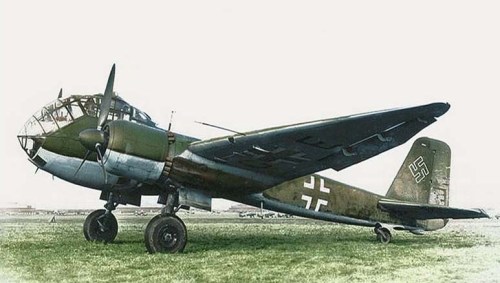 With its burning fuel and pieces of its own fiery débris, the German aircraft actually managed to set fire to the Mosquito, which was, of course, covered in extremely flammable fabric, stretched over a wooden frame. Very soon, in Bamford’s words, “our aircraft was ablaze from end to end”. Not a good situation to be in, and the pilot decided that they needed to abandon the blazing aeroplane as a matter of some urgency. He was flying straight and level to give Bamford an opportunity to bale out when he noticed that the fire was actually getting no worse. Indeed, before Bamford was ready to jump, the flames actually went out.

Although they were lacking a number of the usually vital parts of the aircraft, the pilot was still able to fly straight and level, despite not having any rudder control as the fabric had been totally destroyed by the fire. The only action necessary was to get a piece of old cloth, lean out of a side window and wipe as much soot as possible off the Mosquito’s perspex windscreen. To be honest, that only produced a kind of tunnel vision effect, but it was enough to fly carefully back to base at RAF Manston. Here is the Mosquito in question, after the landing: 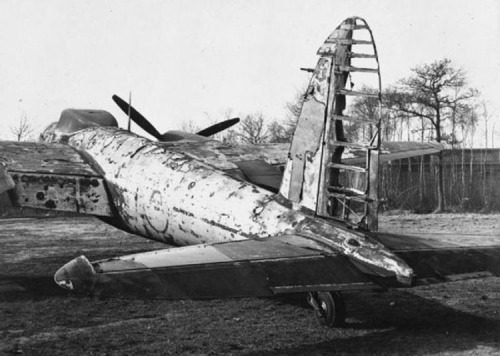 That story is an amazing tale to uncover and it appeared, presumably for the first time, in the Sevenoaks Chronicle and Kentish Advertiser for January 12th 1945. But that wasn’t all that had been found about these two men on the forum. Hedgecoe claimed 8 German planes destroyed and as a radar operator, Bamford claimed 10. Hedgecoe’s minimum list of kills included 2 x Junkers Ju 88, 2 x Messerschmitt Bf110s, a a Messerschmitt Me410, Junkers Ju 188, a Focke Wulf Fw 190 and one unidentified. This is a Messerschmitt Bf110:

Amazingly, Hedgecoe himself had already baled out once previously under rather peculiar circumstances. He hunted down a German aircraft in the darkness during the night of September 15th-16th 1943 and opened fire on it. For some reason which never became apparent, this action shattered the nose of his own aircraft which he was then forced to abandon.

The other details discovered about these two men across the Internet were quite astonishing. The Commonwealth War Graves Commission Website is always the first port of call, providing, for all casualties, service numbers, units, dates of death and the names of parents and spouse, with locations where possible. And, of course, the basics are there as well. Norman Bamford was a Welshman and came from Llanfair near Harlech in Merionethshire: 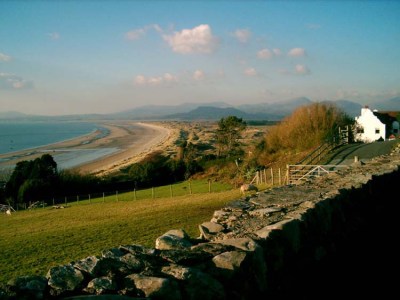 Edward Hedgecoe lived with his wife Sheila Sandford Hedgecoe, of Brookmans Park in south Hertfordshire. Here’s the bridge at nearby North Mymms: 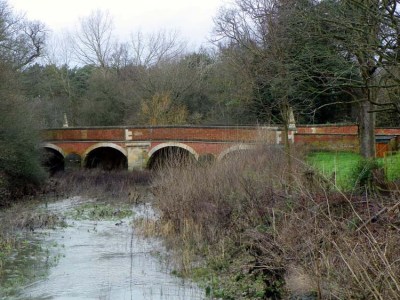 Researchers though, can nowadays also trace the individual’s path through various units. In the case of Hedgecoe he was in 85 Squadron, the Fighter Interception Unit, the Night Fighter Development Unit and finally 151 Squadron.

The details of somebody’s education can be found…in the case of Bamford, he attended The Bec School in Tooting and then University College in London in order to qualify as an architect. Family details can be traced…younger brothers, where the family live and where they used to live, the name of the widow, and in due course on occasion, the details of her remarriage and where she went to live.

And all of it down to the Internet of course. Had these two young men ever been shot down by a Luftwaffe aircraft, we could even be reasonably certain who pressed the firing button.
These two young heroes came to their end on January 1st 1945.  Edward Hedgecoe was 34 years of age and Norman Bamford was just 25 years old. They had recently been transferred and were flying with 151 Squadron on their very first flight with that squadron. It was very bad weather, they crashed and tragically, they were both killed. Edward Hedgecoe was buried in North Mymms Churchyard in Hertfordshire. Norman Bamford was cremated at Croydon Crematorium after a service attended by his family and friends and two representatives from the RAF Base: 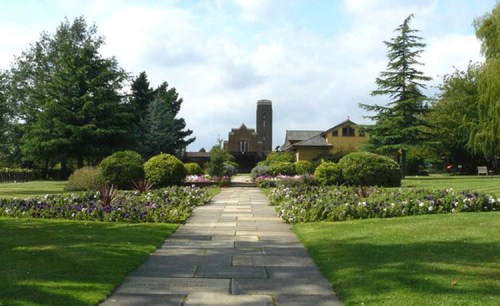 And were it not for those people who maintain all the websites and the ones who beaver away on the Forums, nobody would ever have known the faintest thing about them.

One final note. I am having a second hand operation on February 8th, tomorrow, so I won’t be able to reply to any of your comments for, probably, a couple of weeks. As soon as I am able to, though, I will answer what you have been kind enough to contribute.

29 responses to “Hedgecoe and Bamford : Death in the Night”