Earthquakes and Lights in the Sky

At least one physical phenomenon is very rare in Nottingham. Would that it were not so:

“Northern Lights,” or “Aurora Borealis” was first recorded as having been seen in the neighbourhood of Nottingham during the winter of 1755-1756. The Northern Lights appear at their best according to an eleven year cycle, and 2015-2016 was quite a good year, so keep yourself entertained by doing a very long backwards calculation!
Here is a website which will tell you when is a good time to look for the Northern Lights.

Another physical phenomenon is almost equally infrequent in Nottingham…Thank Goodness!
And luckily, when it does happen, it tends to do little damage, and it soon gets forgotten. Who remembers this one now?…

“August 23 1752  The severe shock of an earthquake was felt in Nottingham and the surrounding district, about 7 a.m. Great alarm, but not much damage, was the result. The day was remarkably fine, both before and after the shock.”

And forty years later, another earthquake came to nothing…thank goodness:

February 25, 1792  Between the hours of eight and nine this evening, an alarming shock of an earthquake was felt in the Midland counties, but particularly at Nottingham, many of the inhabitants running out of their houses, expecting them to fall upon their heads. The shock was preceded by a rumbling noise, like the rolling of a cannonball upon a boarded floor.”

Another Victorian source mentions an earthquake on October 6th 1863:

“The earthquake appears to have been felt over a great part of England” and it was decidedly more severe in the western parts of the country, especially the West Midlands:

“At Birmingham walls were seen to move, and people rose from their beds to see what damage had been done, for though the rumbling, grating sound is like a passing train, it was known at once to be something more. At Edgbaston successive shocks were plainly felt, and houses were shaken to their foundations. At Wolverhampton everything in the houses vibrated. The houses cracked and groaned as it the timbers had been strained. The policemen on duty saw the walls vibrate, heard everything rattle about them, and were witnesses to the universal terror of the roused sleepers.
At Cheltenham, a deep rumbling noise was heard, the heaviest furniture was shaken, the fire-irons rattled, heavy stone walls were heard to strain and crack, and the boys at Cheltenham College were all under the impression that the rest were engaged in making the greatest possible disturbance.”

I was unable to find a picture of the boys of Cheltenham College, but, much better, here are the splendid young ladies of Cheltenham Training College around the same period: 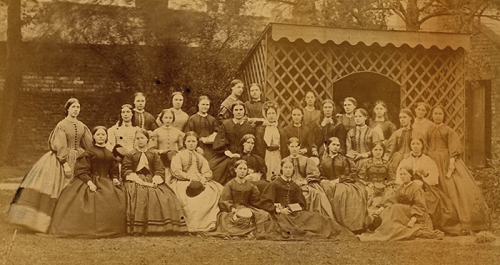 And what of Nottingham? Well…

“October 6th 1863  A slight shock of earthquake was felt early in the morning in Nottingham, and in most parts of the country.”

and then, just over a year later:

“October 30th 1864  Slight shocks of an earthquake were felt in Nottingham, and in various parts of the country.”

Those two earthquakes were so insignificant that they have, literally, not passed “the test of time” and I have not been able to find really very much at all about them.

In fairly recent times, my Dad experienced an earthquake in South Derbyshire:

“On one occasion when he was walking home from his job as a teacher at Woodville Church of England Junior School in Moira Road, Woodville, Fred was the hapless victim of an earth tremor. It must have been quite frightening because, as he was to relate many times in subsequent years, he was able to watch the pavement rippling up and down with the force of the shock.

Seismological records for the local area show that this event occurred most probably on February 11, 1957. Here is my Dad’s quiet little mining village around that time, in the late 1950s:

If you want to check the history of known earthquakes in England, then this is the link to the relevant Wikipedia page.

29 responses to “Earthquakes and Lights in the Sky”