The adverts in Victor Comic (2)

Here’s a second look at some of the adverts in Victor Comic in the 1960s. Ironically, given the wide spectrum of areas where the picture stories are based, from working class athletes to First World War flyers, from the trusty Gurkhas to the first Mounties, the adverts are not particularly vast in scope. I suppose the problem was that they all had to sell things which a boy or a youth of say, 8-16 or older might be interested in, and could afford, without involving risky photographs of the fair sex or dangerous weapons.

So keep it clean lads and stick to your Airfix kits:

FW Woolworth. Whatever happened to them? All the naughty boys were  probably sniffing their Airfix glue to get their kicks but there was certainly very little of a hallucinogenic quality in stamp hinges. So the comic was full of  them. And a lot of money must have been made. Well, they do say Philately will get you anywhere. Just look at these adverts:

Don’t be fooled by the word ‘Million’, though. For a start, you have to share a million stamp packets with everybody else and there is bound to be some catch to it. You certainly won’t get a million packets of stamps because that many would bury a small town. The second advert has prices.  Between 2/6 and 5/- would be a likely sum for a boy’s weekly pocket money (12.5 to 25 pence). The advert for 50 different stamps “plus exciting mystery set” certainly makes Heston in Middlesex sound exciting and mysterious. And neither Mr Brown nor Mr Delaney in the very last section can be doing that well with the amount of advertising space they have had to share.

There are still matchbox covers for sale. although if I lived in Cocksett Avenue I think I’d move:

And still the stamps pour in. Did the entire world write a dozen letters a day? To Rumania, and Paraguay, and China (Communist and Nationalist)? 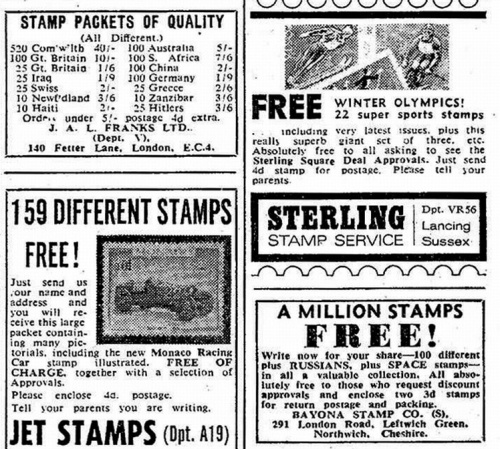 England winning the World Cup in 1966 gave every country an excuse to print even more stamps. And those stamps that were overprinted with “England Winners”. Do you remember how everybody went nuts to buy them? Well, just look up sometime how much they are worth nowadays: 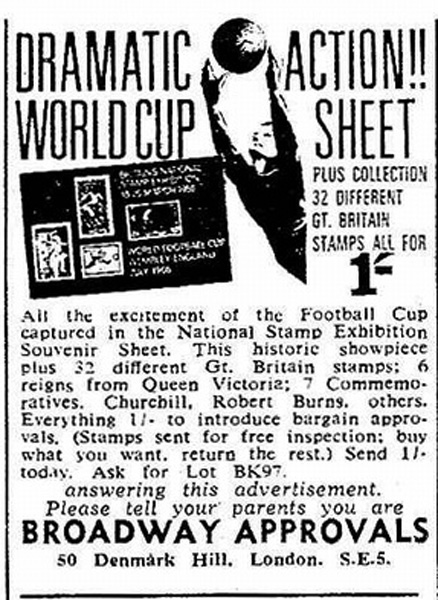 For the older boy there were adverts for cars:

Mind you, they were model cars at Woolworths, not real ones. Incidentally, my Dad paid £510 for a full size Hillman Minx in 1966 and my Mum would have played merry stink with him if he’d told her the correct price.

Every teenager will want to change his body, of course. Here’s an advert for Charles Atlas who always looked rather like my Dad;. but only from the neck up. I’ve actually seen this advert before. When I was a little boy, I thought the two young ladies were very strange bricklayers. And I wouldn’t want to live in Chitty Street either:

And last of all, a comic can advertise itself. Special editions for the Summer Holidays:

And don’t miss any foreign sales. There are thousands of little boys across the globe all wanting to have Victor comic sent to them. But what bizarre sums of money! 43/4d and 36/10d are just weird. It’s like the charge being precisely £4.34 or exactly £3.61 :

Above all reserve your comic: 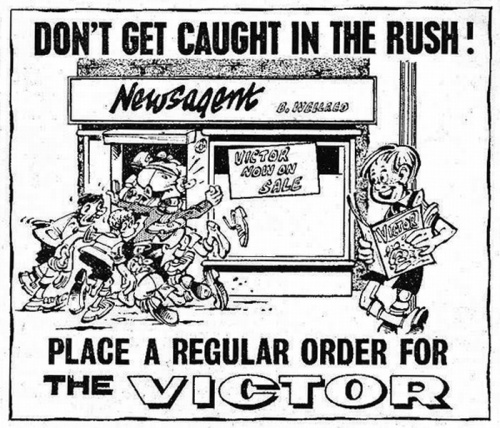 Or you could buy your Victor on DVD. A lot cheaper than collecting the whole lot on ebay one at a time.