Victor Comic normally began with a war story in full colour on the outside covers of the comic. The story was always true, although I don’t think that that ever really registered with me: 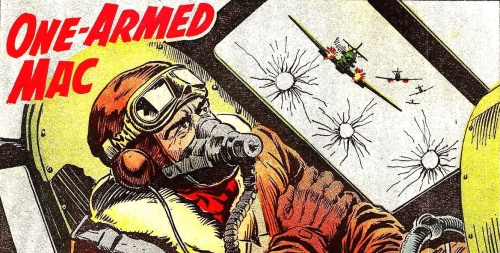 This particular story may not have been 100% true but I think that this is because Douglas Bader was still alive at the time and they didn’t want any law suits: 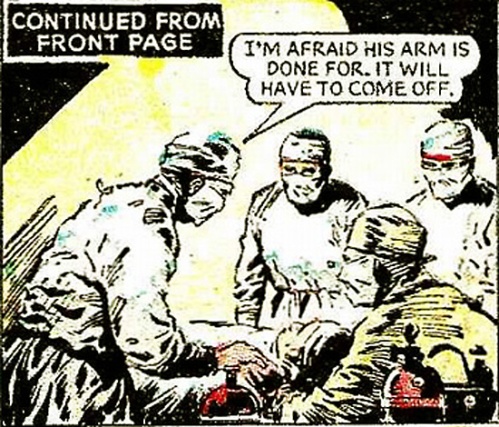 And anyway, what’s an arm or a leg between friends? 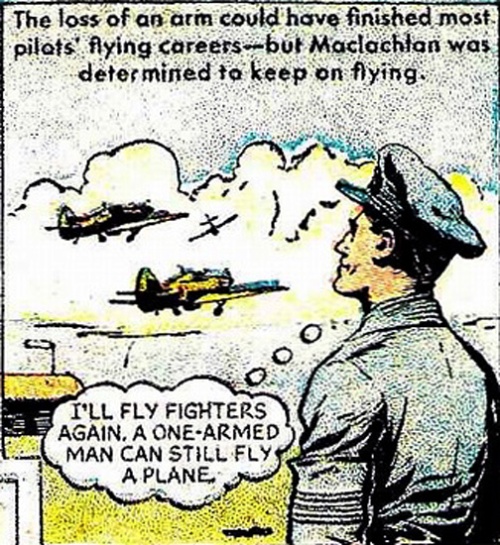 Good Old One-Armed Mac was back doing what he did best. Killing Germans:

Good Old One-Armed Mac used to fly a Hawker Hurricane, but the squadron leader chose to ignore totally the aircraft’s fuel tank capacity when he announced one day that they were going to go and attack Germany. Perhaps they went just a little way up the Rhine on an aircraft carrier:

No, I don’t see an arrestor hook there. But they’re very good, aren’t they?

Victor always had completely 100% fictional wartime characters such as Sergeant Matt Braddock VC. He usually flew a Lancaster or a Mosquito but he could turn his hand to anything. Nobody knew that Matt and his navigator George were the adopted sons of Biggles and Ginger: 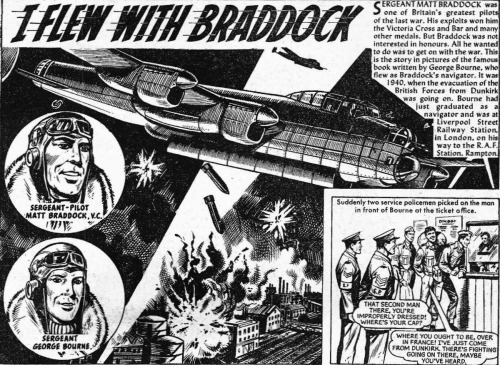 Here’s the text if you can’t read it:

Given the hair brained nature of some of the things they did, I’m not too surprised that Matt and George were based at the fictional RAF Rampton. Here’s the Terrible Twosome and a nice illustration of what they do best:

Braddock might have been a double Victoria Cross winner, but he was not cut out for training young recruits: 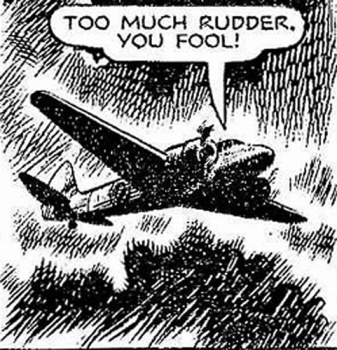 He was not very good either at passing on the idea of “the calm pilot who was always in control” :

He was never really very interested in the concept of patience and understanding:

Occasionally, in the stories featured in Victor Comic the odd cliché would crop up. The clichés were never really a genuine source of negativity though and they were never meant in a nasty way.

And race hatred was something that just did not ever crop up. No higher respect could have possibly been paid, for example, to those great warriors, the Gurkhas or indeed, any other non-white soldiers in the British Army.

Characters from the Middle East could even star in their own series. And, yes, the hero does look a little bit blonde haired with possibly a hint of blue eyes:

But what about “the traditional Jesus” ?  Very few people will ever have been struck by the markedly Jewish appearance of Jesus in illustrations . Here’s Jesus the Viking: