I would be the first to admit that Victor could sound a little clichéd on occasion:

But the British always overcame every problem. Only two British guns and 132 German tanks. Don’t worry! We’ll get ’em all! And make sure you don’t miss any!!

Tank recognition classes can now put their knowledge into practice. The men who drew these tanks had probably seen them for real: 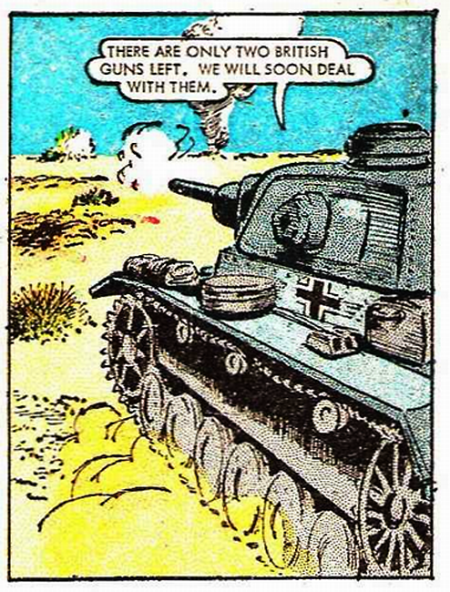 Let’s be honest. A great many of the comic’s drawings  have something hackneyed, or even ridiculous, hiding away inside them. Not to mention exaggeration. Whoever saw a hole in a ship that big?

Still, at least the German officer in the next frame doesn’t say “to ze vaterland” :

Contrast the British approach below. In the kayak, two commandos, who are perfectly well aware that Hitler’s personal order was that if they were captured, they would be shot. This was the “Kommandobefehl” which you can read about here. The man on the submarine, though, might as well be offering to take their letters to the Post Office for them. “Right! Thank you! And could you see if they are still selling those cough sweets I like? Just get me a couple of packets, would you, old chap?”