They were only playing leapfrog…..

This story comes from a source which I have used quite frequently, namely “The Date Book of Remarkable Memorable Events Connected With Nottingham and Its Neighbourhood”. On this occasion, the year is 1794 and the French revolutionary government has recently abolished slavery on February 4th of that year. Only a week later, on February 11th, the sessions of the United States Senate are made open so the public can come along and watch.

Today, though, is February 23rd and the slack jawed young locals in the Hockley area of Georgian Nottingham have all assembled in Broad Street. They are going to have a damned good game of leapfrog while they wait for somebody to invent football. On this modern map, LRTS marks the tram system. Look for the orange arrow: 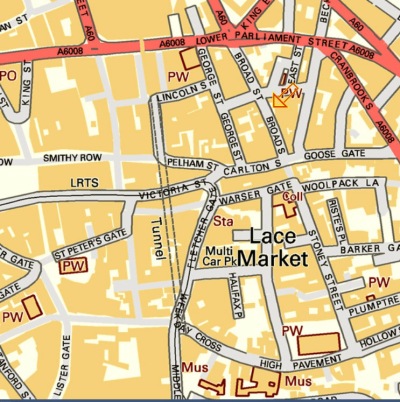 I presume that leapfrog  is a universal game across the world. This is Harlem during the Jazz Age:

And here’s one of those old Victorian stop motion films:

You wouldn’t want to play  leapfrog in the middle of Broad Street nowadays, but in 1794 it was not a problem. So what happened? Well…….

“A number of young men, in a playful mood, were diverting themselves in a game of leapfrog in Broad-street, when one of them disappeared underground in a remarkable manner. He had leaped over the back of a comrade, in the customary way, and happened to alight on the spot where there was a well,  120 feet deep.”

It wasn’t as big as this…

But it was still quite big and it soon attracted a crowd:

“The aperture had simply been covered with boards and a little earth, and was uniform in appearance with the surrounding ground . Fortunately, the man was extricated perfectly unhurt, and with an oath declared himself equal to any pantomime performer on the stage, inasmuch as he dare leap without being caught in a blanket! The well was immediately arched over.”

Nowadays, Broad Street is a busy but basically, fairly ordinary thoroughfare, except some bored fool with nothing better to do has painted ” Broad St” on the floor in big white letters :

The other end of the street has a famous pub:

This pub is nowadays the only real attraction in the street. Things might change though, if “arching over” an old well doesn’t solve the problem for very much more than 200 years. Then we might see some more excitement.

Here’s a better view of the pub:

Once you’ve had a refreshing pint of ale in the Lord Roberts pub, above, you might even feel like a game of leapfrog yourself. Here’s the army’s version of the game in that magnificent anti-war film about World War One, “Oh What a Lovely War”. The song is entitled “They were only playing leapfrog”:

Tagged as Broad Street, e Lord Roberts, leapfrog, They were only playing leapfrog

26 responses to “They were only playing leapfrog…..”