The World of the Mysterious (3)

I said last time that I would take my trailcams back into history and legend to see if I could find any suggestions that creatures similar to Bigfoot were mentioned over the course of the last 5,000 years or so. I told you of Enkidu, the creation of the god Anu, and the companion of Gilgamesh, who was one third human and two thirds beast, very hairy and very wild: 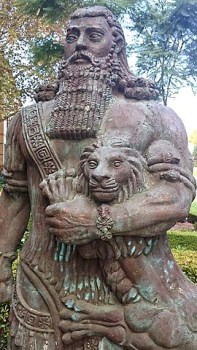 The most obvious place to continue the search, of course, is the Bible. In the Book of Numbers, Moses sends out his Twelve Spies to have a look at the land of  Canaan. They return and say that they have seen fearsome giants there. They tell him:

“The land, through which we have gone to search, is a land that eateth up the inhabitants thereof; and all the people that we saw in it are men of a great stature. And there we saw the giants, the sons of Anak, which come of the giants: and we were in our own sight as grasshoppers, and so we were in their sight.”

What I will freely admit though, is that in another version of some of the quotation above, the translation is given as:

“And there we saw the Nephilim, the sons of Anak, who come of the Nephilim; and we were in our own sight as grasshoppers, and so we were in their sight.”

I don’t know what’s happening here or how it is possible to translate a word as “giant” and then on another occasion as “Nephilim”. What I did find out, though, is that the proper name ‘Anak’ is the Hebrew word for “giant” (ענק). Here’s a picture I found of the Twelve Spies, recounting the size of the giants in Canaan. It looks like the recreation of a Bigfoot sighting in “Finding Bigfoot” when Bobo stretches his hand over his head and Ranae says “But that makes it fifteen feet tall!”:

Because of this idea that there were giants in Canaan, I also looked at the possibility that the famous Goliath was not a human being but some kind of Bigfoot. In actual fact this proved not to have been a very likely thing to have occurred. The general feeling seems to be that successive translators have just added a cubit here and a cubit there and that is why the Big Man  is nine feet tall rather than just over six feet, which was not desperately taller than King Saul himself. There are also a great many other details about Goliath known from other sources which prove that he was a human being rather than a member of another species:

According to Wikipedia, the exaggeration of his height is relatively easy to trace:

When I was a little boy around nine or ten years of age, our entire class, forty or so of us, all helped to make a two dimensional Goliath with paper and cardboard. He was actually dressed as a Roman soldier with armour of tinfoil and a red curtain for his little kilt. He was six cubits and a span tall and, trust me, he was extremely large!

Sadly, I couldn’t find any pictures of Robert with nine or ten year old children. Don’t forget though, that Goliath would have been at least a foot taller than the famous American, allegedly.