The World of the Mysterious (5)

I said last time that I would take Cliff Barackman, James “Bobo” Fay, Ranae Holland and Matt Moneymaker back into history and legend, to see if I could find any creatures, perhaps based on Bigfoot, mentioned over the course of the last 5,000 years or so.  I spoke of Enkidu, and Moses’ Twelve Spies in the land of  Canaan. I also rejected Goliath, and I described Grendel who, although I thought he was possibly not as dangerous as he has been portrayed, I thought was not necessarily armless.

This time, I would like to touch upon the story of Jean Grin, a subject which I have explored before. It all took place in early 19th century France  in the wonderfully picturesque and unspoilt region of Lozère, which is here:

This time the situation is a little more complex in that Jean Grin was, supposedly, a historical figure who was active as recently as 1800. He lived in a mountain ravine, in a crude cottage of stone with what is now a collapsed roof, surrounded by pine trees and dry scrubland. Inside, against the very rock itself, there is the oven where he roasted children to eat. Outside are several piles of stones covered with soil, supposedly the burial places of his victims:

Jean Grin was living here because of his inability to get along with his neighbours. They called him an ogre, and considered him an ambiguous being, “mi-homme mi-bête”, half way between animal and man. Soon after his arrival in the ravine, he seemed increasingly to take on the attributes of a savage, brutal, wild person that no social norms could restrain:

Young shepherds and shepherdesses began to disappear in the surrounding region. At the time, in a neighbouring area, there had been severe problems with some kind of mystery animal, either a very large wolf or a canid of an unknown species. It had been termed the “Beast of Veyreau” or “La Bête de Veyreau” and I have already written about it:

Whatever the killer in Lozère was, it only attacked weak people or children. In just six months, from June-December 1799,  three victims were killed and eaten.

Physically, Jean Grin was by now dreadful to look at. He supposedly wore just animal skins and he could run extremely fast across the countryside and up and down slopes: 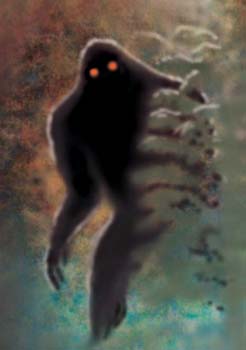 In the dark, his eyes gleamed bright, shining red and you could see him coming from far away. Jean Grin too has been given the attributes of a Bigfoot. Memories from centuries ago have been added to his story. He had luminous red eyes.  He possessed prodigious speed both going up and coming down mountainsides. He had an appearance generally thought to be “mi-homme mi-bête”. In addition, photographs show that he lived in exactly the same kind of dry, rocky environment where Bigfoot lives nowadays in the Sierra Nevada of California:

It is my contention though, that the story of Jean Grin is obviously much, much older than a mere 200 years. Indeed, I think that quite a complex process has therefore come about here.

Firstly, the people had a dim memory from centuries previously of Bigfoot type creatures in the forest and in the mountains. Secondly, there was an eccentric and unpopular man called Jean Grin who lived in the area. He was big and ugly. Thirdly, an unknown animal,  the “Beast of Veyreau”, was attacking, killing and eating the young children who were left on their own to guard the flocks of sheep.

And what has happened is that these three elements, of Bigfoot, of gory deaths and of weird loners have all been melded together to give us the present legend. There are no Bigfoots in France nowadays, but in the centuries when the east of the country, in particular, was covered in extensive thick forest, I think there were, and recent enough for memories to linger on.