The World of the Mysterious (8)

During my researches about the Wodewose and the Green Man, one thing which has struck me is that to some extent there is a split between the two in terms of location. Indeed, it would be interesting to carry out a little research and to try and  establish the validity of this theory. More interesting still would be to try and see if there is a reason for it:

From what I have found on the Internet, therefore, I would posit that the Wodewose is linked more frequently to churches in areas with abundant water, areas where there are lots of rivers to follow. The places I have mentioned in my previous post are Boston in Lincolnshire and the counties of Cambridgeshire and Suffolk. All three of these regions in medieval times were full of marshes, and were areas subject to continual flooding. Indeed, much of the land area, in Lincolnshire and especially in Cambridgeshire, was permanently covered by shallow water and would be subject to extensive drainage schemes in later centuries.

Here are the marshes of Lincolnshire and Cambridgeshire. They were called “fens” and on this old map, virtually all of the land inside the dotted, or perhaps dashed, line, would have been a good place to take your wellingtons. Indeed, after the Norman Conquest in 1066, the Saxon freedom fighter, Hereward the Wake, held out in the fens against the overwhelming forces of the Norman invaders from at least 1067-1071. He is known to have used all of the areas enclosed on this map, particularly the Cambridgeshire section around Ely : 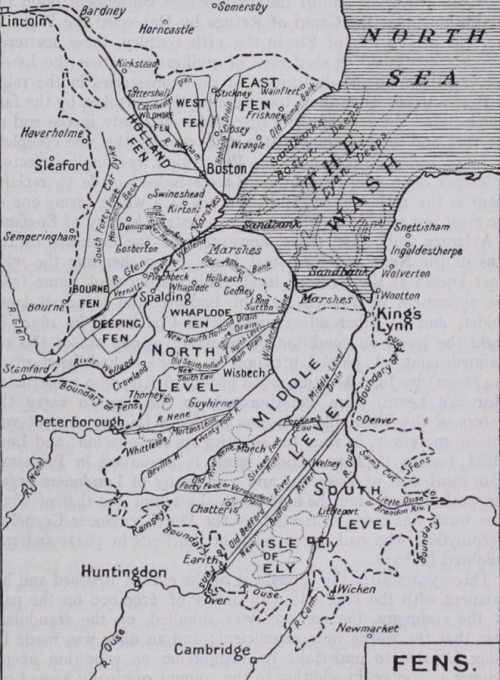 Here are the rivers of Suffolk in the only map I could find. There is perhaps not as much marshland but the county is riven by estuaries which seem to penetrate deep into the dry land. The blue lines of the rivers are only those of reasonable size. The streams and brooks are not featured:

Given the modern Bigfoot’s predilection for rivers, lakes and swamps, I think the Wodewose would have enjoyed living here. Because of the landscape, he may actually have been seen more frequently as he paddled through shallow marshes, perhaps in pursuit of his prey. For this reason the locals considered him to be a living, breathing creature somewhat like themselves but different. He was not seen as supernatural or godlike:

The Green Man, however, is mainly linked to churches in areas which were drier and more heavily forested. In places such as these, the Wodewose would have been seen even less frequently than in the marshes. For this reason, his once-in-a-green-moon appearances began to take on something of the supernatural. He became the godlike “guardian of the forest”. 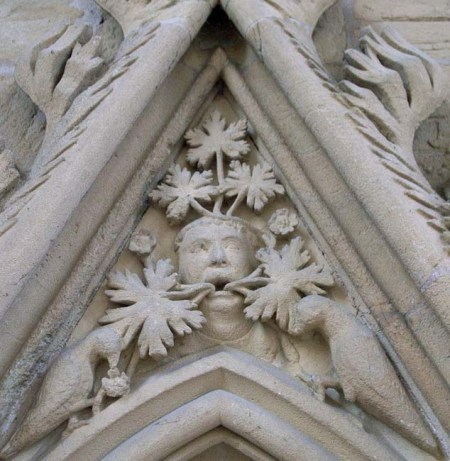 And at the time, this was a rôle which needed to be filled because it was around this period that people were beginning to clear the forest much more extensively for agriculture and for fuel. Between 1066 and 1230, around a third of the woodland in England had been cleared for growing crops and the grazing of domestic animals. And once you’ve cut down a thousand year old oak tree, you have a good wait on your hands for it to be replaced. Here’s Nottinghamshire’s “Major Oak” which “missed the cut”, literally:

With marshes, no special guardian was needed to look after them. England was not short of rain! Indeed, it would take the people of the Fens area until 1630 to get started on draining the land and making it more suitable for agriculture. Even then, it took a Dutchman, the famous Cornelius Vermuyden, to do it:

For that simple reason, the Wodewose would remain a physical entity, rather than a supernatural one. He was little different from the beavers, the ospreys, the cranes and the Large Copper butterflies that were soon forgotten only twenty years after they had disappeared.