Fred walks home with Will

As I mentioned before, my Dad, Fred, during his time in the RAF, was frequently given 24 hour passes which ran from 00:00 hours on the first day to 23:59 on the second. They weren’t much use when he was with 20 Operational Training Unit in Lossiemouth which even nowadays, using the motorways, is a there-and-back trip of almost 930 miles. Here’s the old Lossiemouth from a wartime picture:

And here’s the brand new sign at the gate:

Here’s the journey by car today:

On the other hand when Fred was stationed at Elsham Wolds in Lincolnshire, two day passes were fine. Here’s the home of 103 Squadron in 1943:

Fred was often forced to travel in the early morning because he wanted to make use of the first few hours of his pass, usually from around 00.40 by the time he had walked down to Barnetby Station, to when the earliest train left Barnetby at, say, 01.10.

From Barnetby he usually travelled to Lincoln, then Nottingham and then Derby, although he could carry on from Derby to Burton-on-Trent if he so wished. The orange arrow points to Elsham Wolds, and Burton-on-Trent has been hidden, more or less, by the first triangular sign with an exclamation mark, just to the south of Derby:

Here’s a map of the local area around Woodville, the mining village where Fred lived. His house was quite close to the tip of the orange arrow, in actual fact. The station at Burton-on-Trent is the tiny white  dot on the spindly black thread running from north east to southwest near the town, just below the “U-R” of “BURTON” :

The problem Fred faced at this point, however, was that from Burton-on-Trent to Woodville where he lived, there would be no buses running if it he had arrived at Burton Station at four o’clock in the morning. If that were the case, there was only one remedy…what used to be called “Shanks’s Pony”. Do check out the link. It is quite an interesting origin for this phrase and useful for the American version of it too.

On one occasion, Fred came back on leave from Elsham Wolds and he then continued through Derby station to the local station at Burton-on-Trent. When he emerged onto the street, knowing full well that he had a five mile walk in front of him, he found that his father, Will, then in his mid-fifties, had spent at least a couple of hours of the early morning darkness walking the five miles from their house in Woodville to meet his son at the station as he got off the train:

They walked back together in the fresh, bright summer sunshine, the road even more deserted than normal as it was so early in the morning. Not a single word was said between father and son at any point in their journey. Their mutual respect and solidarity, their love, was expressed not by words but by a deed, the walking of five miles just to be with somebody that extra couple of hours, even if the time together were to be passed in total silence.

In later years, Fred was to say that one of the greatest regrets of his life was that he had never said anything to his father during this walk and that his father had never said anything to him. In general, Fred wished that there had been much more obvious affection shown during his life with his parents. Will had never hugged Fred or even held him in his arms as a young child. Never in his entire live did he ever express his undoubted love for his son by such gestures, which he would have thought unmanly.

Here they are, in a local park on holiday in Blackpool. Notice the fashion statements. Will is wearing those two coloured shoes and Fred has one of those elasticated belts that fastens with a metal snake device: 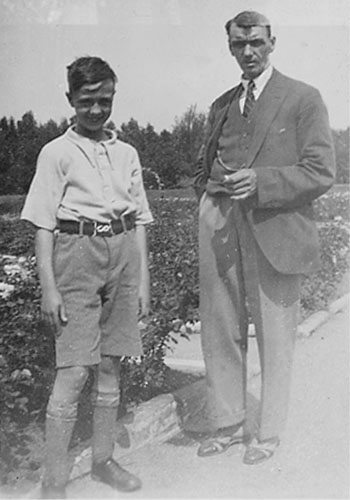 18 responses to “Fred walks home with Will”