“What would you do ?” used to figure on the cover of a boys’ comic called “Boys’ World”. This was a publication, obviously, aimed at boys and first appeared on January 26th 1963. There were 89 issues before the comic was merged with Eagle in 1964. The last issue of “Boys’ World” came out on October 3rd 1964.

I used to buy “Boys’ World”, and this was mainly for the front cover, which always featured a kind of puzzle. It was called “What would you do ?” and was based on somebody being in what Ned Flanders would call “A dilly of a pickle”. Here’s the situation: 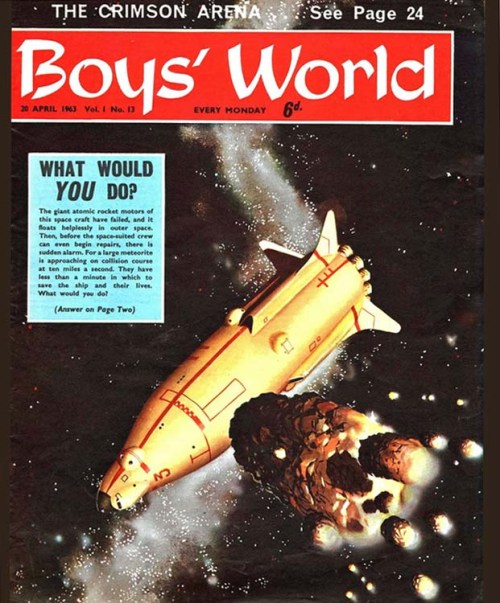 The blue box sets the scene, and the task is for you to solve the situation. Perhaps you might like to write your idea in the “Comments” section.

So, a dilly of a space pickle. The space craft floats helplessly after the atomic motors have failed. The crew are in space suits but they have very little time to start the necessary repairs before the ship’s alarm goes off. An extremely large meteorite is coming towards them at ten miles a second. The time left before impact is less than sixty seconds and counting.