My Dad, Fred, and the Hollywood cinema of yesteryear

When he was a little boy, perhaps around ten or twelve years of age, around 1933, my Dad, Fred along with some friends, walked the mile or so to nearby Swadlincote, to go to the cinema. Here is the cinema:

That’s not the best of views, so here is the “Empire” but in later years:

Swadlincote has always had two cinemas but never at the same time. The sequence is usually

Cinema 1 is reopened by over-optimistic idiot

Cinema 2 is eventually reopened by another over-optimistic idiot

Anyway, Fred and his pals, all around ten to twelve years old, weren’t there to see any old film. They were there to see Boris Karloff in “The Mummy”, one of the most frightening horror films of that decade. Feeling extremely brave, they sneaked in and settled down, waiting to be frightened: 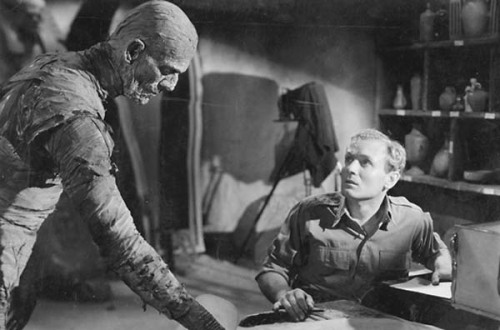 Fred was not, of course, like the modern child, immured to fear by hour after hour of relentless television, and he came out chilled to the core by Karloff, completely terrified by the whole film. And so did the rest of them.

There could be no sharper contrast, however, than that between this Karloff chiller and Fred’s favourite, and funniest, Laurel and Hardy film. The latter was “Fra Diavolo”, which, again, he would have seen at the cinema in Swadlincote: 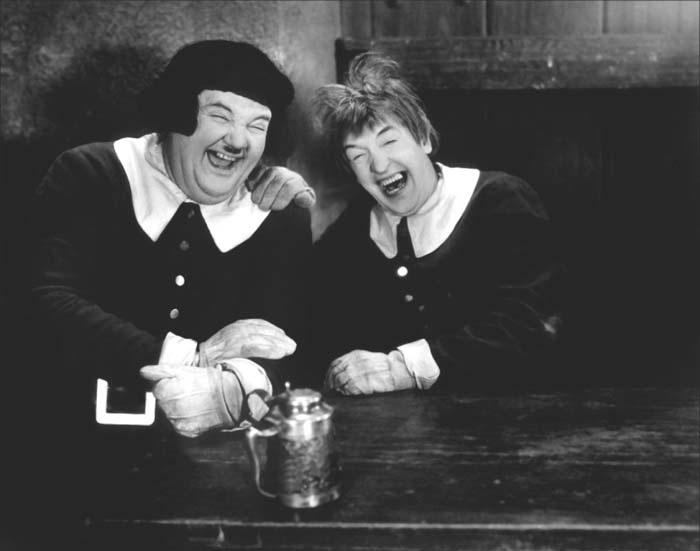 One other tiny detail that I can remember my Dad supplying, which must have come from this era, was how, when watching silent films at the cinema, however old you were, you were expected to read the words of the dialogue for yourself. Nobody would help you. If you asked for assistance, you would be told contemptuously, “Learn to read !”

Overall, Fred must have been very interested in the cinema. His collection of old magazines, kept for thirty or more years in the glass fronted bookcase in the front room of his parents’ house, contained ones which featured German expressionist cinema of the 1920s, including both Fritz Lang’s “Metropolis” and “The Cabinet of Doctor Caligari”. The stills featured included Rotwang’s house, Maria the Robot and the somnambulist Conrad Veidt carrying his victim high above the rooftops.

On one occasion, Fred was actually able to meet a real, genuine Hollywood star. Just after the war ended, he was in Brighton for some long forgotten reason. He decided to visit a very distant cousin who worked in a local cinema, and who may well have been one of the Sussex branch of the Knifton family.

At the time, this particular cinema was the centre of all attention, as it was being visited by Charles Laughton, the world famous English and Hollywood film actor. Laughton was there to give a little publicity to one of his less famous films, a rather unloved feature entitled “The Beachcomber”, made with his then wife Elsa Lanchester in 1938. All of the cinema employees lined up to meet their famous guest, and Fred, at the urgent bidding of his cousin, joined on to the very end of the line, thereby managing, eventually, to shake hands with the great man:

Years earlier, of course, Fred had watched the inimitable Laughton in the 1933 film, “The Private Life of Henry VIII”. In common with countless thousands of other cinema goers, he had particularly vivid memories of the greedy king eating a whole chicken with his bare hands, and then throwing bits of meat and bone over his shoulder to the waiting hounds: 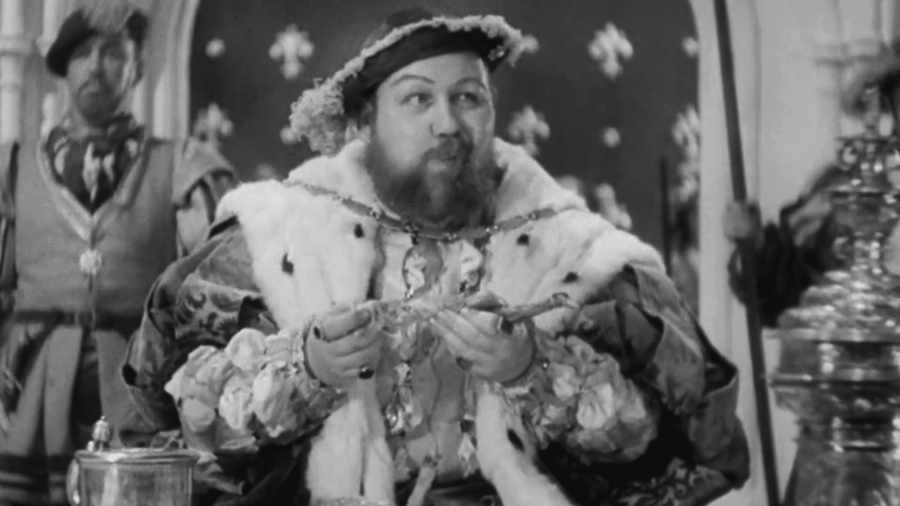 Who said that table manners were a thing of the past?

But, please be aware. Restaurants of all types seem to frown on throwing bits of meat and bone over your shoulder, and there are very seldom any waiting hounds to tidy up the mess.

19 responses to “My Dad, Fred, and the Hollywood cinema of yesteryear”