Last time, I talked of how men who were once famous but who had evil hidden deep in their souls can live on artificially through their statues. Without that statue, such men would soon be forgotten in the dustbin of history.

I would rather emulate John Hickenlooper, the Governor of Colorado, who, in 2014, told the descendants of those murdered by Colonel Chivington and his men at Sand Creek in 1864:

“We should not be afraid to criticize and condemn that which is inexcusable ……. We will not run from this history.”

And in 2015, construction of a memorial to the Sand Creek Massacre victims began.

And I certainly feel that, if there are people who do not want to have statues of these “dubious heroes”, who do not want to be reminded of their ancestors’ suffering, then so be it. And, by this method, such men will gradually fade away rather than be kept alive artificially by a statue.

An excellent example would be Werner von Braun. Operation Paperclip made him an American citizen, along with 1600 of his fellow scientists. These were the people who helped to mastermind manned space flight and the landing on the moon. An ordinary person might want a statue.

I can think of a few Jews who wouldn’t though. And Russians, and Poles or any other East European descendants of the ones who died, as tens of thousands of slave workers perished building concrete bunkers, blast proof shelters, and rocket launching ramps all over the island of Peenemünde. If these people feel strongly enough, then no statue.

Here he is with the highest ranking Nazi of all. The SS Sturmbannführer is dressed as a civilian, middle of the next to back row:

This one is more difficult, but von Braun is behind Himmler, dressed up in his all black SS uniform:

We’re not in the slightest bit short of people in this category. Lord Nelson was an excellent naval commander with a 100% belief in the British Empire. But by 1801, Nelson, already married to the unfortunate Mrs Frances Nelson, was living with another woman, Emma Hamilton. She was not his wife, and he shouldn’t have been living with her. In actual fact, she was the wife of one of his closest friends, Sir William Hamilton. 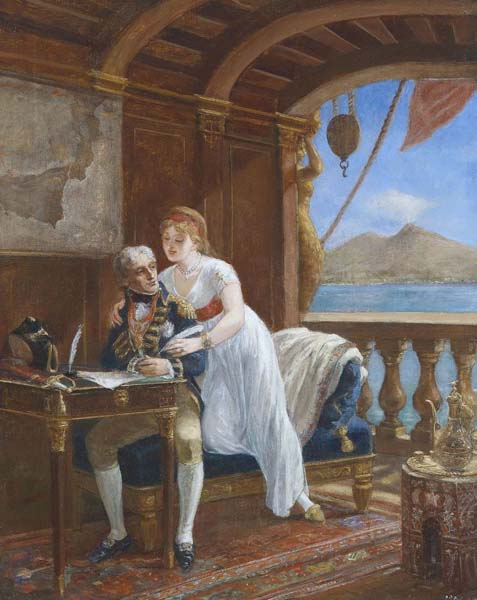 There will be a lot of men nowadays who will not be too bothered about Nelson’s little foibles, but I bet there are a lot of women who would not want a statue of him staring them in the face, especially in the nation’s capital city.

I wonder who bought more of these satirical jugs? Men or women?

High on the list of people from this period who have shocking sides to their character is Lord Byron, the Romantic poet. Not that he couldn’t knock out some famous poems when he put his mind to it:

“She walks in beauty, like the night
Of cloudless climes and starry skies;
And all that’s best of dark and bright
Meet in her aspect and her eyes”

Or, perhaps more famous, “The Destruction of Sennacherib”

“The Assyrian came down like the wolf on the fold,
And his cohorts were gleaming in purple and gold;
And the sheen of their spears was like stars on the sea,
When the blue wave rolls nightly on deep Galilee.

Lord Byron, though, ought to encounter a great deal of difficulty having a statue erected to him, and I don’t mean just his dress sense:

George Gordon Byron, the Sixth Baron Byron, was allegedly England’s greatest poet. Yet, it has been written that “By our own modern standards he was probably a paedophile and certainly a rapist, at least of the statutory kind.”

The evidence for these charges include the fact that Byron had an infatuation with a shapely fifteen year-old Greek boy, Lukas Chalandritsanos and spent enormous sums of money on him.

He had already had an incestuous relationship with Augusta Leigh, his own half-sister. Here she is:

Augusta gave birth to Elizabeth Medora Leigh, who was widely thought to be Byron’s child. Three days after the birth, Byron visited Augusta and the baby. He reported later to a friend, Lady Melbourne:

There was a widely held belief at the time that a child born of incest would be an ape.

Evidence from a servant says that Byron raped his wife only days before she gave birth to their daughter, Ada. And then he raped her again only days after she had given birth.

In those days, of course, a husband could not be refused by his wife. What would now be considered rape was just a gentleman exercising his conjugal rights. But by today’s standards, actions like that are repulsive, especially so soon either before or after the poor woman has given birth.

Byron’s appalling arrogance was equally in evidence in his love affair with Claire Clairmont. Here she is: 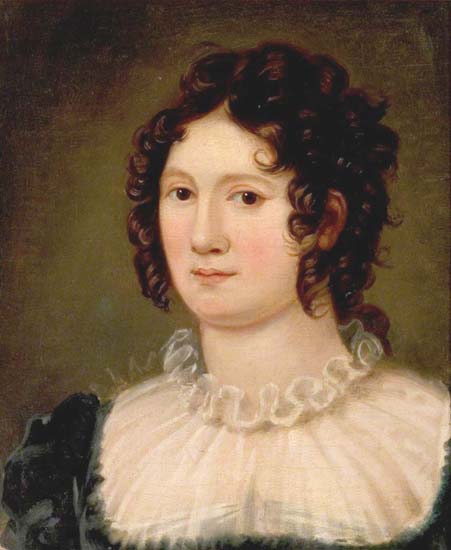 Claire gave birth to a daughter, Allegra, but Byron immediately forbade her all access to her child, whom he sent away to a convent. She died there aged five.

And to think that I criticised the baddies in the TV series “Poldark” as not being true to life!