“What would you do ?” used to figure on the cover of a boys’ comic called “Boys’ World”. This publication first appeared on January 26th 1963. There were 89 issues before the comic was merged with Eagle in 1964. The last issue of “Boys’ World” came out on October 3rd 1964.

The front cover always featured a puzzle, called “What would you do ?”. It was based on somebody being in what Ned Flanders would call “A dilly of a pickle”. Here’s the situation: 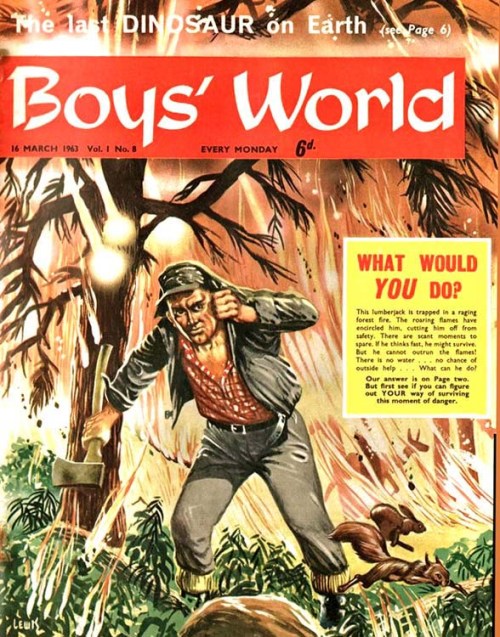 The yellow box sets the scene, and the task is for you to solve the situation. Perhaps you might like to write your idea in the “Comments” section.

So…..it’s a raging forest fire, with roaring flames, and he’s cut off. There’s no water to save him, and no Superman, no Batman, not even a fireman.

So…..it’s one “Dilly of a pickle”. What can he do? Well, any bright ideas, write them in the “Comments” section.

First prize is a look at page 6, to see the last DINOSAUR on Earth.

Filed under Canada, Wildlife and Nature