Stories about my Dad (3)

In 1946, my Dad, Fred,  gave up his exciting job as a Brylcreem Boy of Bomber Command and signed up to be for what was called at the time “emergency training” as a teacher. It has always intrigued me as to how many veterans of Bomber Command became teachers. And I have my own ideas about that! Fred finished up getting a job quite near to his home, at a school in Hastings Road in Church Gresley. The school was built in 1898 for 420 children. Fred taught there until the mid-1950s.

Here’s a modern map of the area. The Orange Arrow points to where Hastings Road School used to stand before it had to be demolished in the late 1950s, lest the subsidence problems made it collapse completely with the teachers and children inside :

When my Dad, Fred, worked there, the vast majority of the children were the sons and daughters of miners, both of coal and of clay. They were all what you would call “rough diamonds”.

Most of them, therefore, were far from sophisticated, either in their knowledge or their behaviour or, indeed, their hygiene. Fred used to tell the story of having a boy in his class called “Stinky Roberts” . At the beginning of the school year, Fred was given the helpful advice by his colleagues never to let this particular boy sit next to a hot radiator under any circumstances. If he sits next to a radiator, then make him move!

Whether it was because Fred did not believe the other teachers, or whether it was because, in the absence of any particularly obvious hygiene problem, he quite simply forgot their advice, remains unclear.  But on one unfortunate day, when “Stinky” did get to sit by that scorching radiator, the wisdom of his colleagues became manifest, as the unbelievable stench of long unwashed filth and ancient, uncontrolled urine wafted inescapably around the room. In this way, Fred learnt one of the most important basics of teaching, namely that no boy is ever given a nickname without very good reason.

At one point, Fred had a bet with another teacher that he could leave his class working quietly while he went down to Lloyds Bank in Swadlincote to draw out some money. The pupils were told to behave themselves properly while he was away, and to continue with their work. This they duly did, and Fred won the bet.

In another variation of what was obviously the same story, Fred did not go down to the bank in Swadlincote, but instead, went to post a letter at the Church Gresley Post Office, a destination considerably nearer to Hastings Road School, and, from the point of view of unsupervised children, a much shorter, and therefore, perhaps, a more plausible time to be away.

One of Fred’s more pleasant jobs was the fact that he ran the school football team. He was partnered in this by his young friend, Vernon Langford. We do actually have a misty photograph of the staff at Hastings Road. Here it is : 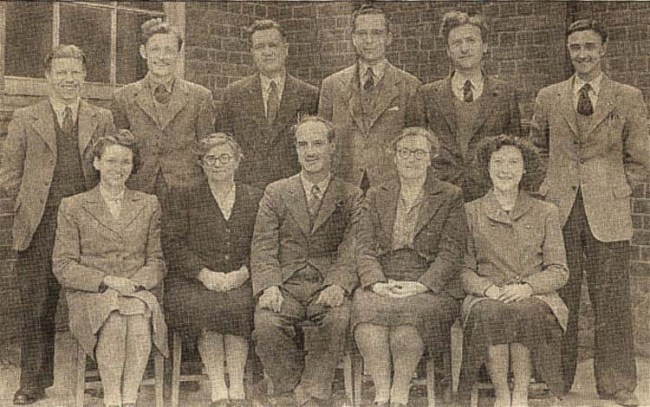 Fred’s teaching career at Hastings Road reached its pinnacle when he was conducting a lesson in Physics. At this time all secondary school teachers, even those who were trained to teach Geography, were expected to be able to turn their hand to more or less anything.

Fred’s brief was to demonstrate the effects of air pressure, so he took a pint glass, filled it with water, and then put a sheet of card over the top. He then explained that in a moment, when he turned the glass upside down, the contents would not spill out, because the air pressure on the card, which was equal to hundreds of pounds, was pressing down and keeping it in place. This news was received by the children, of course, with immense scepticism.

When Fred turned the glass over, however, perhaps as much to his surprise as anybody else’s, the rather unlikely result was that the card did actually stay in place, and the water did not spill out. The children’s reaction was astonishing. They were all totally amazed. One boy stood up, and shouted at the top of his voice, “A miracle ! A miracle ! Mester Knifton’s worked a miracle ! ” And then he ran out of the room and around the school, still shouting

I believe that this incident was the closest that Fred ever came to being regarded as divine. Here’s a video of a mere mortal man trying out this trick: