Tag Archives: ‘Call of the Skies

Vandalism in the School Archives? Or is it Art?

A few months ago, I went into the School Archives to photograph the School Lists. They are quite boring little booklets to be brutally honest, but they are very informative and record the names of all the members of all the forms in the School for every year. The oldest ones date from the late 1860s, but because I was researching the school’s casualties in World War II, I started my James Bond activities with 1892 and then went forwards as far as 1950. Just for the sake of argument, here’s one, with a particularly famous ex-pupil on it:

With all that information, it is actually a Victorian Excel Spreadsheet!

The only thing out of the ordinary that I found in 3.96 GB of School Lists was in the edition for 1941:

Once again, some young man was feeling the ‘Call of the Skies’: 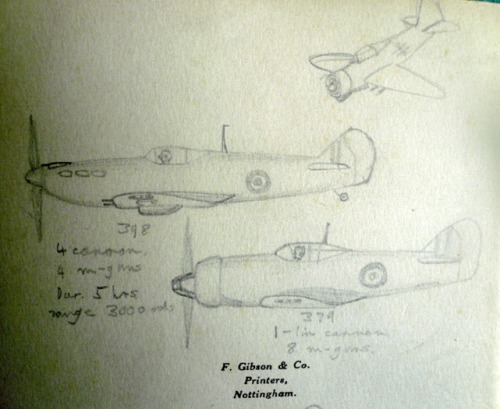 Below the printers’ name, he had knocked out a couple of bombers; 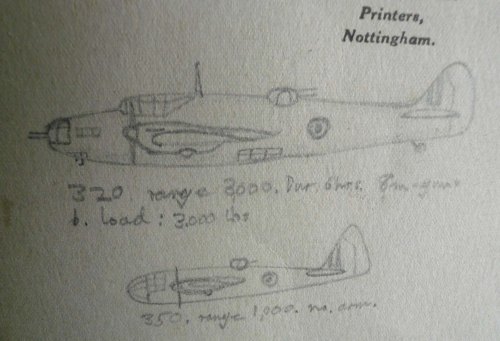 Here’s the larger of the two bombers blown up as best I can:

It is called the 320 and has a range of 3,000 miles, with an endurance, I think he means, not ‘duration’, of 6 hours 8 minutes and a bomb load of 3,000lbs. It also has 8 machine guns. Looks a bit like a Blenheim with the nose of a Heinkel, the tail of an Airspeed Oxford perhaps and inline engines.

Here’s the smaller of the two bombers blown up as best I can:

It is called the 350 and has a range of 1,000 miles, with no armament. It looks a bit like a Blenheim with the nose of a Heinkel, the tail of an Airspeed Oxford perhaps and inline engines. Here’s one I prepared earlier:

I have also tried hard to blow up the first of the fighters: 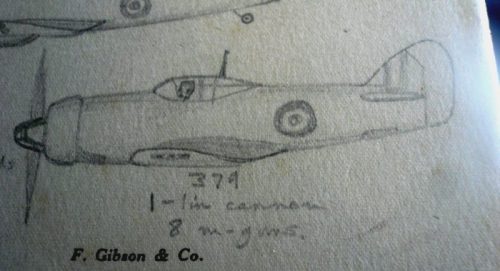 It has one 1 inch cannon, in the propeller boss, by the look of it, and 8 machine guns.

It is called the 398 and has 4 cannon, 4 machine guns, an endurance of 5 hours and a range of 3,000 miles. I’m sorry to say that Maths was not necessarily this young man’s strong point! The German fighter has no names or specifications:

For me, it is mainly Focke Wulf Fw 190, but there is a little dash of Mitsubishi Zero in it as well perhaps.

I often think that we regret what we do not do far more than what we do do. When I was in the Sixth Form at Ashby-de-la-Zouch Boys’ Grammar School, we used to have French lessons in a smaller room because there were only 12 of us. One of the desks had a fantastic carving of a B-17 Flying Fortress, deep into the wood of the lid, with all the ailerons, all the machine guns and all the ventilation holes in the gun barrels. It was fabulous. This is the closest I can find on the Internet:

Looking back at how much money the school had, I suspect it dated from  1943 rather than 1963 and the Airfix kit of that era:

My regret is that I did not find any way of preserving this work of art rather than it be thrown into a skip in the middle 70s.

Not much survives of the pupils in any school. And what does would have been classified as vandalism at the time. Such as this example from 1922: 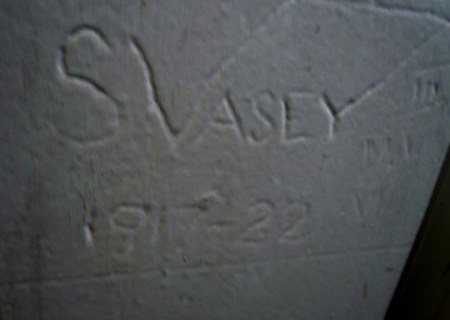 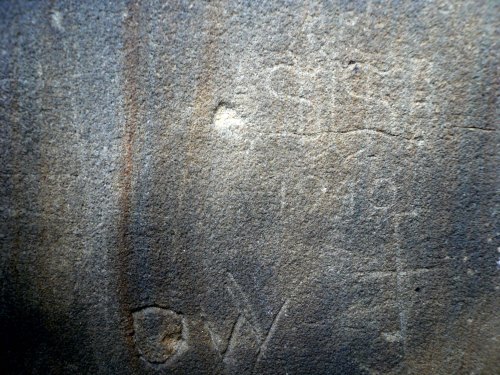 or this one from a young man who upset the High School more than he could ever imagine: 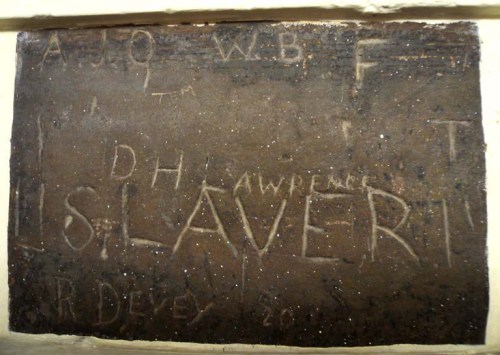