A twitch doesn’t have to involve a bird. It is becoming increasingly fashionable to twitch animals. I have twitched a Steller’s Sea Lion on the Brisons, a pair of sea stacks just off Cape Cornwall, which is in Cornwall, funnily enough. And I succeeded in my quest. I saw this amazingly lost creature, who, by rights, should have been sunning herself in Vladivostock Harbour. I saw her, on and off, for several years, in actual fact:

I have twitched a Bottle-nose Dolphin in Gainsborough in Lincolnshire. It frequented the River Trent at the back of of a supermarket car park in Gainsborough, Lincolnshire, Netto, if I remember correctly. It was there from January 25th-30th 1999, although I turned up on January 31st. And guess what? Well, this is all that I saw:

The following account is of a twitch for a sea-creature. It took place in the summer of 1817 in Massachusetts, and this is just one of a huge number of accounts. It came from Colonel TH Perkins on August 15th 1817. I have made one or two changes to make it easier for a modern reader to understand but other than that, there are no differences:

“The first appearance was in the summer of 1817, in the harbour of Cape Ann: 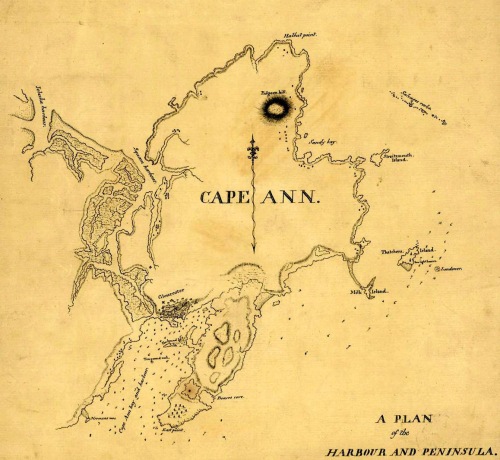 And here is the more modern, less charming version:

And conceivably, this map is the best one for all the English people who think Boston is a market town in Lincolnshire:

Back to the story:

“I visited Gloucester with Mr Lee. On our way down we met several persons returning, who had already visited the place, and they reported to us that he had not been seen for two or three days past. We, however, continued our route to Gloucester, though with fears that we should not be rewarded with a sight of the monster which we sought.

I had already satisfied myself, from conversation with several persons who had already seen him, that the reports in circulation were not mere fables. All the townspeople were, as you may suppose, on the alert, and almost every individual, both great and small, had had sight of him, at a greater or less distance:

“The weather was fine, the sea perfectly smooth, and Mr Lee and myself were seated on a point of land which projects into the harbour, about twenty feet above the level of the water, from which we were distant by about fifty or sixty feet. Seated in this way, I observed an agitation in the water at the entrance of the harbour, like that which follows a small vessel going five or six miles an hour through the water. As we knew there were no rocks where the water was this broken. I immediately said to Mr Lee that I had no doubt that what I had seen was the sea serpent in pursuit of fish. Mr Lee was not looking at the spot which I was talking about, and had not seen the foam of the water, the animal having immediately disappeared.
In a few moments after my exclamation, I saw on the opposite side of the harbour, at about two miles distance from where I had first seen, or thought I saw, the snake, the same object, moving with the rapid motion up the harbour, on the western shore”: 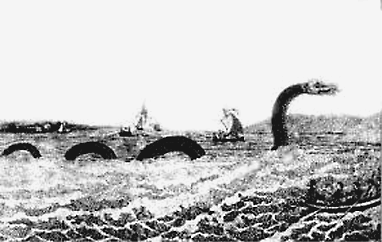 “As he approached us, it was easy to see that his motion was not that of the common snake, either on the land or in the water, but evidently the vertical movement of the caterpillar. As nearly as I could judge, there was visible at a time about forty feet of his body. It was not, to be sure, a continuous body, as from head to tail he was seen only three or four feet at a time. It was very evident, however, that his length must be much greater than what appeared, as, in his movement, he left a considerable wake in his rear. I had a fine telescope, and was within less than half a mile of him. The head was flat in the water, and the animal was, as far as I could distinguish, of a chocolate colour. I was struck with an appearance in the front part of the head like a single horn, about nine inches to a foot in length, and of the form of a spike. There were a great many people collected by this time, many of whom had already seen the serpent. From the time I first saw him until he passed by the place where I stood, and soon after disappeared, was not more than fifteen or twenty minutes”: 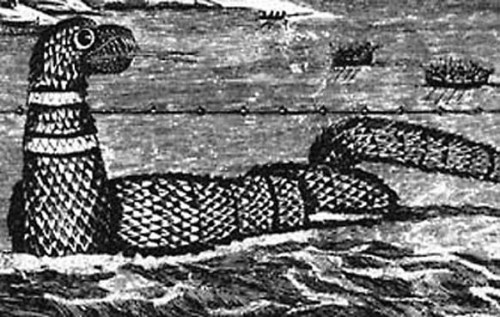 “I left the place fully satisfied that the verbal reports in circulation, although differing in detail, were essentially correct. I returned to Boston, and having made my report, I found Mrs Perkins and my daughters disposed to make a visit to Gloucester with me when the return of the animal should again be announced. A few days after my return I went again to Cape Ann with the ladies; we had a pleasant ride, but returned unsatisfied in the quest which drew us there.” 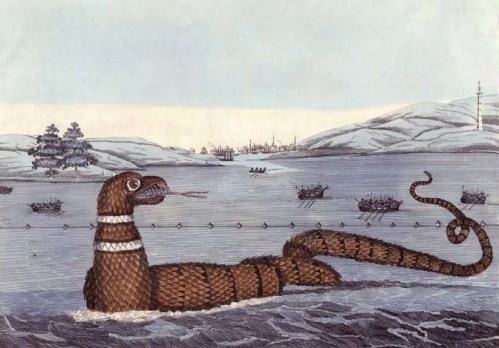 This particular sea serpent was seen regularly around Cape Ann until 1819 at least. Indeed, the east coast of the United States seems to have been a good place for would-be sea serpent twitchers, with records dating back to 1638:

Don’t think I don’t have my own story to tell:

On October 25th 1988, I went to the Isles of Scilly to birdwatch. I crossed over on the ferry, the Scillonian. For two or three hours during the crossing, I remained on deck with my binoculars, eagerly scanning the storm tossed waves for seabirds.

“At one point, I noticed what I took to be the head of a Grey Seal, which broke the surface perhaps a hundred metres away. It was dark in colour, and I could see a forehead, two eye sockets, and an obvious snout. I didn’t really think twice about it, and it remained there for perhaps two or three minutes. Then, suddenly, a Gannet flew directly above it, and I realised from a comparison of sizes that the head must be at least a metre and a half, if not two metres, across. And that means it cannot have been a seal !”