The World of the Mysterious (7)

Last time we looked at the Wodewose. Here he is:

For me, the strange figure of the Wodewose is based on a Bigfoot type creature that may still have been alive and well in the vast forests of Western Europe in the early Middle Ages. At this time, the forests in England, for example, were enormous and covered between a third and a half of the country. And even when the Wodewose was gone for ever, then there were still people who had heard their grandfather’s tales about him and who could recreate him in their own world.

He was certainly famous enough to feature in documents written on old parchment . This one dates from 1325. He is on all fours because he has to fit in between the text in Latin and the bottom of the page:

A similar ‘margin picture’ dates from the 1300s. Notice the mother and her child with another young woman (bottom left) and what is either a fight or a very keenly contested game of golf (bottom right): 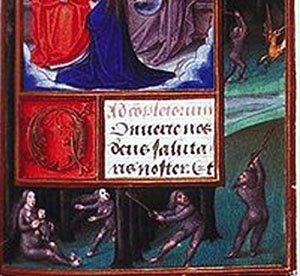 In this old drawing, the Wodewose looks as if he has lost his club and is struggling to find it (not a golf club, or a country club, but the other kind):

These two individuals are from a series which show the Wodewose’s well known desire for women, yet another feature he has in common with Bigfoot. Picture 1 shows his gentle method of courtship:

The second shows his next step which could well be summarised as “RUN!!!!” If you read about Bigfoot a lot, you will be familiar with his ability to pick up hogs and other farm animals and run off with them. But beautiful ladies are even more impressive: 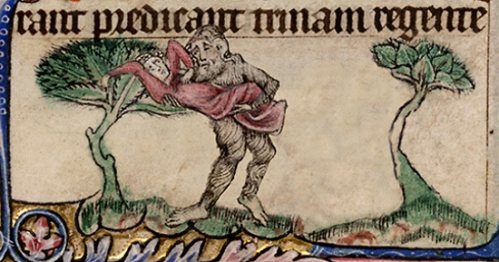 This Italian lady, though, is well versed in the tricks of both Italian men and Italian Wodewoses. Forewarned is forearmed:

Is the Wodewose carrying a golf club in that last picture?

Bigfoots and Wodewoses hate dogs too:

It is my belief that the Wodewose may well be the direct ancestor of the now much more famous “Green Man” which is a very familiar figure to anybody who visits medieval Western European churches. The Green Man is believed to be the deity who brings back the greenery every year in spring, hence the leaves pouring out of his body. This one is in Norwich Cathedral: 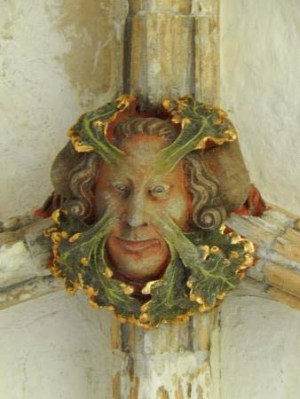 This one comes from Lincoln Cathedral:

The Green Man does also have an aspect as a kind of guardian of the forest, and the trees and the plants therein. And that, of course, is a rôle ascribed to Bigfoot by many different Native American peoples. This Green Man is taken from Poitiers Cathedral in west-central France:

The Green Man very often seems to occur in areas which have originally been heavily forested. The best Green Men I have ever seen occur in the Chapter House in Southwell Minster in Nottinghamshire. At the time it was built, it would have been in Sherwood Forest: 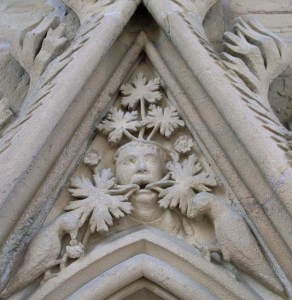 Next time, the explanation.

One final point is that in these blog posts about Bigfoot, I have tried very hard to use only images which are available to be used. With some images that is not the case because otherwise there was nothing else available. I am 100% willing to take them down if this causes a problem for anybody, although I suppose there is the flattering aspect that they were the best I could find!