I thought I would share with you what I personally considered to be the best photographs that the Reverend Charles Stephens took during his years at the High School. Firstly, he took many pictures of various groups of boys. This is a bicycle ride to Southwell in 1952: 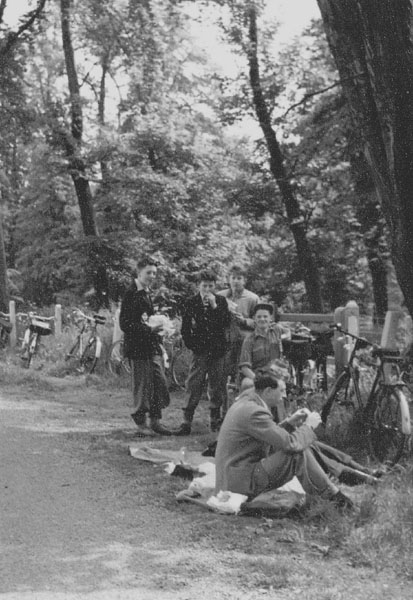 Here is a group of boys eating their lunch while out on a field trip during the 1950s. It is a Form called “3 Red”:

A couple of years later, the Reverend Stephens, like all staff, known by his initials, CHS, took two slightly overlapping photographs of a different 3 Red. This is the left side of the Form, as he looked at them: 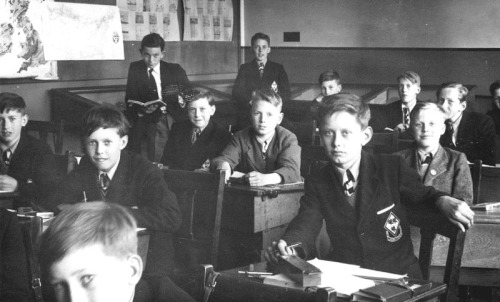 Here is the other side, nearer to the window. Only one boy manages to crane his way into both photographs: 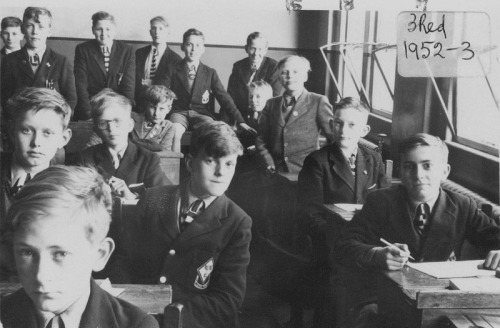 This picture shows an unknown group of boys almost ready to play rugby at the Valley Road playing fields, probably back in the late 1950s. One brave little chap will be playing in his white plimsolls by the look of it. I wish I knew the supervising Master’s name:

The last group of boys is the Combined Cadet Force in 1957, practicing their drills near the old Green Shed. This huge edifice was first erected by the army during the severe winter of 1942.  It was in the north-west corner of the playground which the school had hitherto used for its cricket nets and practice wickets. The shed was used to store searchlight units and sound ranging equipment, which was brought out for drill in the daytime. The High School’s classrooms were used for the army’s theory lectures.
After a while, despite the snow and ice, the army began to dig the foundations for a second shed in the middle of the playground. According to popular legend, it was only when Mr Reynolds, the Headmaster, lined up the entire school and carefully explained to the foreman that the boys might well pelt them with snowballs as they worked was the idea given up. Protests were also made to the War Office through more normal channels. Until the playground received a new coat of asphalt in the late 1980s, the exploratory marks left by the army’s engineers could still be seen:

Here’s the Green Shed in the 1980s and it really was green.:

The last photograph is of a group, but not a group of human beings. This is the queue of trolleybuses waiting to take boys back from Sports Day to School at four o’clock, probably in 1957: 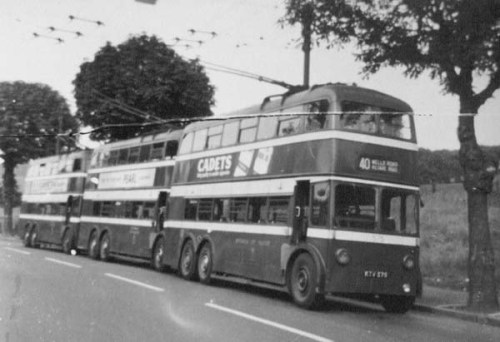 That type of vehicle, with rubber tyres, and powered by an overhead electricity supply,  would have been a bit cheaper than building our present tram system, where, apparently, only 10% of the cost goes on the overhead wires.

The Reverend Charles Stephens has left us a lot of photographs and some of them are rather strange, to say the least. We’ve already had a look at the men in white coats:

And the Zombie Attack : 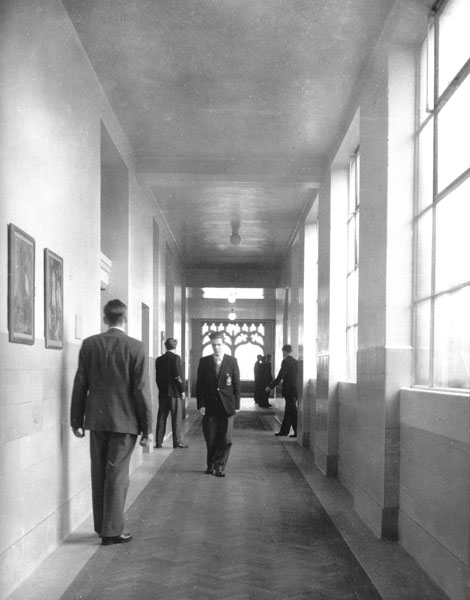 But there are plenty more in the same vein. When I scanned these photographs in 1992 or thereabouts, I had to give many of them my own rather silly titles. This is called “The Skull Society”. I have absolutely no idea what it is:

This photograph is called, rather imaginatively, “Boy with a chair on his head”. Again, I have absolutely no idea what it is, although it may well be the Headmaster’s chair, normally kept on the stage of the Assembly Hall :

Very similar is “Two boys and a Dustbin”, the second title in a row that sounds like a pencil sketch by Salvador Dali: 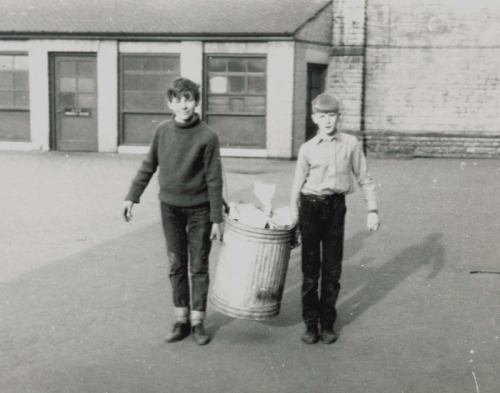 I wanted to call this  “The School Home Brewing Society” but I don’t think that even back in 1957 there was any such body. I have absolutely no idea what the photograph is, nor, indeed, the brand of beer :

I think that this one was taken on a field trip somewhere. It is entitled “The Longest Legs in Showbiz”:

I hadn’t noticed when I scanned these photographs into digital form in the early 1990s, that the photograph above has actually been flipped. Not by me, as far as I know, but by the Reverend for some reason we will never know. Here is the original location, immediately much more recognisable: 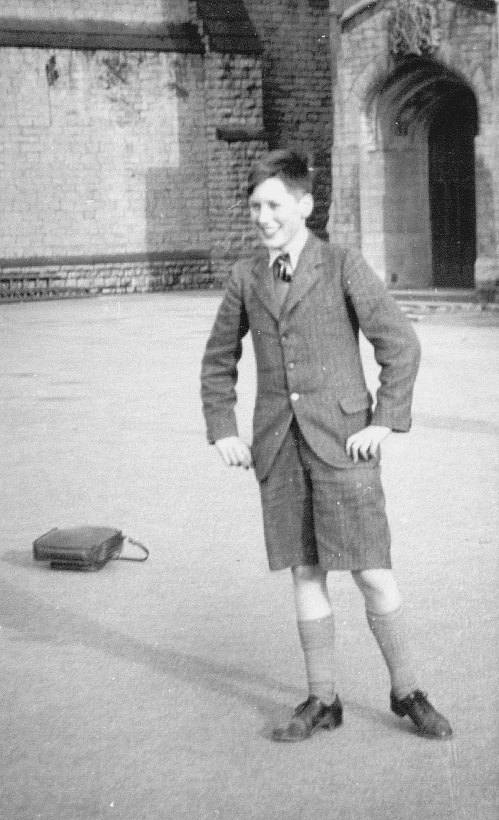 And now, the strangest of the strange. Something we will probably never see again in our lifetime. This is entitled “Car Parking in Arboretum Street, 1961”: 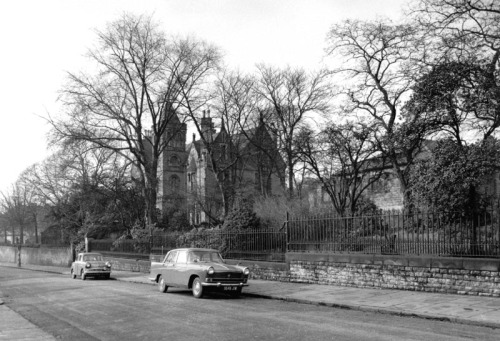 I think this photograph was taken at the western end of the street, and the building set back on the right is the now demolished old Music School. The rather beautiful building on the left must have gone the same way, I suppose, although I have no idea what it is. The nearer car is an Austin Cambridge, or maybe a Morris Oxford. and the further one is a Hillman Minx. Why were there no traffic wardens in those days, to clamp down on untidy and reckless parking like that?

Always finish on a song. And which song could be better than this?

Sports Day : they also serve who stand and wait

One of the best things about old photographs is that we don’t necessarily look at them with the same interpretation of what is happening as the person who took the photograph in the first place. And at sports events, the activities might seem a little boring but the spectators never are. The Reverend Stephens has left us here a good few glimpses of the School Sports Days of the past…and the people who watched them. Here are Messrs Madden, Neville and Foster in 1957:

On the same day, he snapped Messrs Chett, Symonds, Grauberg and Lush. But just look at the cars! Left to right, a Ford Prefect, a Hillman Minx, a Morris Minor 1000 and I really don’t have a clue, but it’s definitely old: 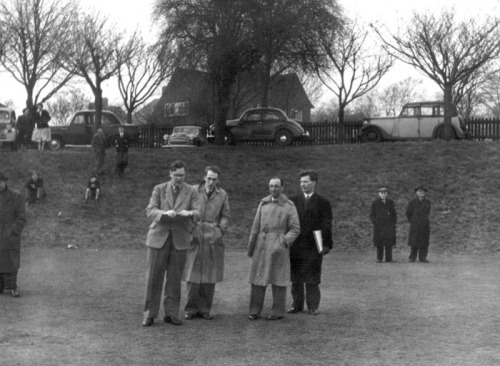 By 1960, things haven’t changed very much. The starter signals that he is ready and everybody else waits for the bang:

Mr Powell doesn’t look too happy as he goes off to see somebody at the other end of the track:

Things were very similar in  1961. One thing that I can’t understand in this picture is the leg in the same lane as the athlete finishing second:

But what’s attracting all the attention in 1957? A small crowd seems to have formed: 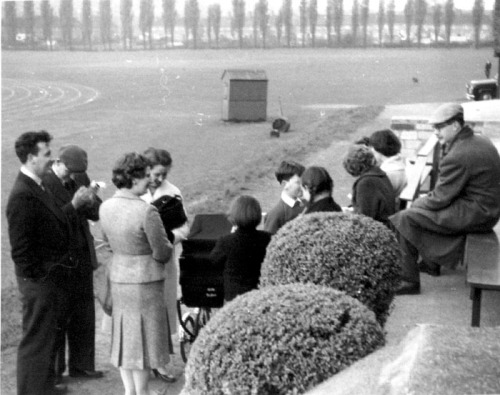 And how could he resist a child who can lick a finger in a world class way?

Of all the photographs we have of Sports Day, these two are the most thrilling. Why did this not happen when I was working at the High School ? Let me point out too, as you gasp at the size of the queue, that ice cream was not rationed at this point. It’s just a wonderful thing to eat, the Food of the Gods: 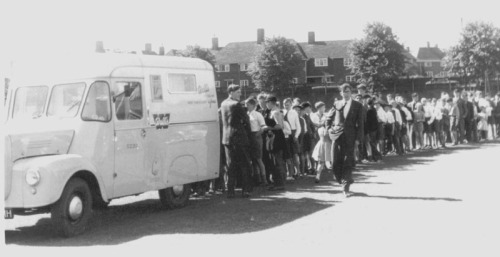 Here it is again!: 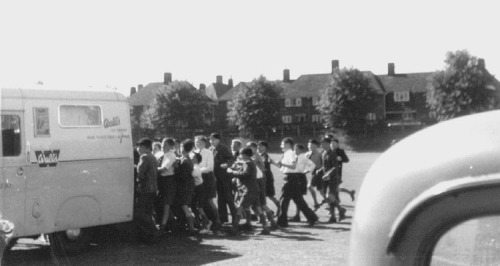 I cannot explain why there is this sudden rush. I would like to say that the ice cream man’s buxom young daughter has had a wardrobe malfunction, but I really don’t know.