Last time I was looking at how ““The Annotated Alice: Alice’s Adventures in Wonderland and Through the Looking Glass” by Martin Gardner added to our understanding of the two books.

One of the most famous characters of Carroll’s book is the Cheshire Cat. Here’s Tenniel’s illustration: 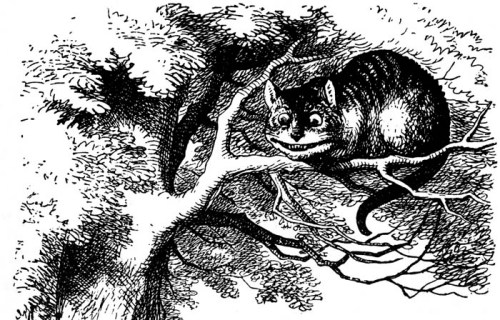 Ao, what does “Annotated Alice” have to say about the Cheshire cat? Well, did you know that “He grins like a Cheshire cat” was already a well known saying before Alice ever met this particular cat? Or that Cheshire cheese was once sold in the shape of a grinning cat? (Difficult to believe that one!) Here’s Mabel Lucie Atwell’s Cheshire Cat:

“Annotated Alice” reveals that Lewis Carroll’s father was once the rector of St Peter’s church at Croft-on-Tees near Darlington in northern England. There, Joel Birenbaum recently found a stone carving of a cat’s head on the east wall of the church’s chancel, just a few feet above floor level. When Joel went down on his knees and looked upward, just the cat’s mouth could be seen as a broad grin.

Alice’s conversation with the Cheshire Cat has even been compared to Jack Kerouac:

“Would you tell me please, which way I ought to go from here?”

“That depends a good deal on where you want to get to.”

In “On the Beat” apparently, the conversation runs:

I personally would even compare a subsequent piece of dialogue between Alice and the Cheshire Cat with the novel “Catch-22” by Joseph Heller. Carroll wrote:

“But I don’t want to go among mad people.”

“You must be, or you wouldn’t have come here.”

The absolute “Star of the Show”, of course, is the Mad Hatter.

Apparently, in the 1850s and 60s, the phrase “Mad as a Hatter” was as equally common as “Mad as a March Hare”. The expression may originally have been “mad as an adder” but it is thought to be much more probable that it comes from the fact that hatters did frequently go mad through using mercury to cure felt, from which hats may be made. Mercury is highly poisonous.

“Hatter’s shakes” were exactly that, and eyes, limbs and speech were frequently affected. After that came hallucinations and psychotic episodes. Apart from that, “hatter” was quite a good career.

There are a good few different versions of the Mad Hatter. There are two styles of Tenniel and also Mabel Lucie Atwell, Blanche MacManus and Charles Robinson:

My own favourite is WH Walker in his “I want a clean cup”. Notice how the ears of the Mad March Hare are used as cowls on the chimneys of the Mad Hatter’s house. Or is that all part of the hallucination?: 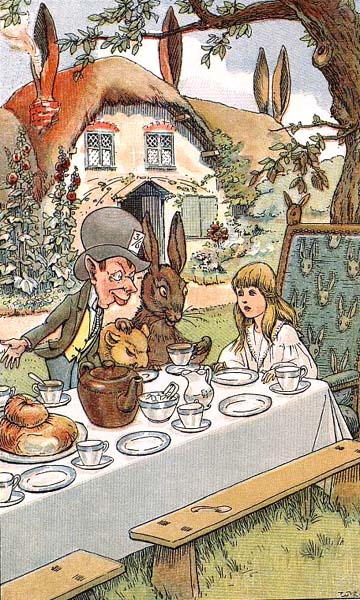 “Annotated Alice” has very little to say about the Mad March Hare. This is from Wikipedia:

“A long-held view is that the hare will behave strangely and excitedly throughout its breeding season, which in Europe peaks in the month of March. This odd behaviour includes boxing at other hares, jumping vertically for seemingly no reason and generally displaying abnormal behaviour.”

On the other hand, “Annotated Alice” reveals that Victorian children used to keep dormice as pets and housed them in large old teapots with dry grass as bedding. Here the Mad Hatter and the March Hare try to stuff the sleeping dormouse into the teapot: 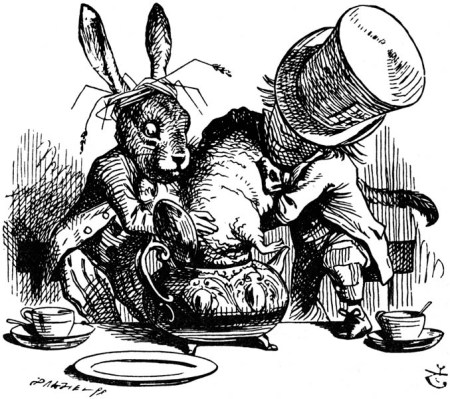 “Annotated Alice” seems to know something about virtually every event in the two books, no matter how trivial they seem. I have only scratched the surface of what subtleties are hidden away in the story. Does anybody realise nowadays, for example, that the Victorians thought a lot about falling down a hole that went straight through the centre of the earth? 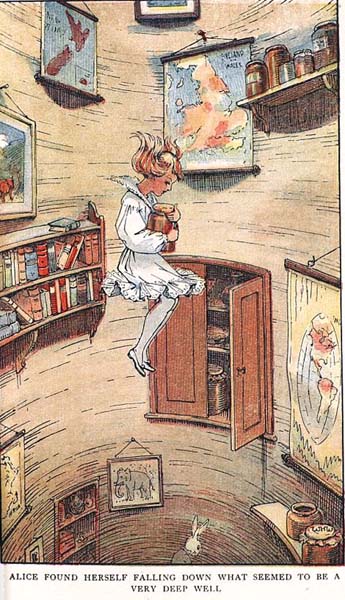 And did we notice very much about the Pool of Tears in Chapter Two? Who was in it? Well, there was “A Duck and a Dodo, a Lory and an Eaglet and several other curious creatures.”

Did they represent anything?

Well, they represented that select group of people, who took that short trip by boat on the River Thames on Friday, July 4th 1862.

As they progressed slowly down the river, Charles Lutwidge Dodgson aka Lewis Carroll recounted the story of Alice. He was the Dodo. His stammer made him give his name as “Do—Do—Dodgson”. The duck was his friend the Reverend Robinson Duckworth, a fellow of Trinity College, Oxford. The Lory is Lorina, the eldest of the Liddell sisters. Edith Liddell is the Eaglet.

“Annotated Alice” has these and a thousand other hidden details. What an excellent book!