This sepulchre of crime

Today is the eleventh day of the eleventh month, a date which, in this country is celebrated, if that is the right word, as Remembrance Day. In the United States I believe that it used to be called Armistice Day but is now renamed as the more inclusive Veterans Day. I always feel rather guilty at this time of year because I have never been able to see the “First World War”, or what we used to be able to call,  unfortunately, “The Great War”, in any really positive light. I am now of such an age that in earlier years I was able to speak personally to at least two veterans of the Great War, both of whom were able to give me their highly critical points of view.
It is not my intention to offend anybody by what I say in this blogpost, but it has always been my firm conviction that there are fundamental truths about the Great War which are always quite simply ignored because they are so unpalatable, and it is far more convenient just to forget them. Because of this, I would fully concur with the writer whose article I read in a newspaper recently, who called “The Great War”, “ineptitude followed by annihilation”.
I have never been able to see The Great War as anything other than the story of, literally, millions of well intentioned, patriotic young men whose idealism was taken advantage of by older men of a supposedly better social class, but who were in reality buffoons who signed treaties, and then declared wars which other people had to fight. And when the conflict itself was fought, the way in which it was carried out guaranteed unbelievable levels of casualties, most of which as far as I can see, were considered as merely inevitable by the top brass as they enjoyed constant  five star cuisine in their châteaux five or six miles behind the lines. In the trenches the average life expectancy of the ordinary soldier was about six weeks. An average of at least 6,000 men were killed every day, as the two sides fought over an area about the size of Lincolnshire, or Delaware, or half the size of Connecticut.
You may think that I am being appallingly cynical, but I have always seen these young men as having been robbed of their lives for little real purpose, victims who, if they had been given the choice, would have ultimately rejected a government gravestone in France or Belgium in favour of an ordinary life in their own home town or village, with a wife and children and all the usual cares and happiness which we now, a hundred years later, see as a basic right. Most of all, I would not take particularly kindly to criticism of my point of view from anybody who has not been to visit the cemeteries of the Great War which are scattered in great profusion across the areas where the battles took place.

This piece of land is perhaps as large as a medium-sized house with a medium-sized garden. It contains the remains of just fewer than 25,000 men. They were for the most part killed in the very first few weeks of the war, when, having joined up straightaway so that they didn’t miss any of the excitement or the glory, they were worried in case it was all over by Christmas. A very large number of them are now known to have been university students, who were soon to find that war had its negative side. At least one of these young men is not forgotten, though.Here is a little remembrance offered to his brother, Friedrich Stieme from Halle, who was killed in 1915.

Here are the names of just some of the young men who are buried in that plot of land.

Here are the names of some British and Commonwealth troops. They are recorded in enormous number on the Menin Gate in Ypres as the soldiers who were killed in fighting around the Ypres Salient and whose graves are unknown. There are 54,896 of these men and they were killed before August 15th 1917, a date chosen as a cut-off point when the people who designed what Siegfried Sassoon  called this “sepulchre of crime” suddenly realised that they had not built the monument big enough for all the casualties to be recorded. These, of course, are just the men with no known grave. If every death is counted, then the total Allied casualties exceeded 325,000.(the population of Coventry or Leicester). German casualties were in excess of 425,000.(the population of Liverpool)

This whole area is dotted with cemeteries whose names, like this one, I have now forgotten. Some of them have just twenty or thirty graves, whereas some of them have a number that would take you a very long time indeed to count.

Too many of these men were unable to be identified because the British Army would not pay for their soldiers to have metal dog tags. The soldiers’ dog tags were made of leather, so that if their bodies remained in the wet ground for very long, the dog tags would rot away. This is why so many of them can be identified only as “A soldier of the Great War”. In addition, the fact that sixty per cent of casualties on the Western Front were caused by shellfire often made identification of casualties difficult. Notice too how nearly all the graves are covered in green slime, almost inevitably, given the rainfall totals in north western Europe.

These graves are in a cemetery containing 300 British Commonwealth and 300 French graves which lies at the foot of the Thiepval Memorial. 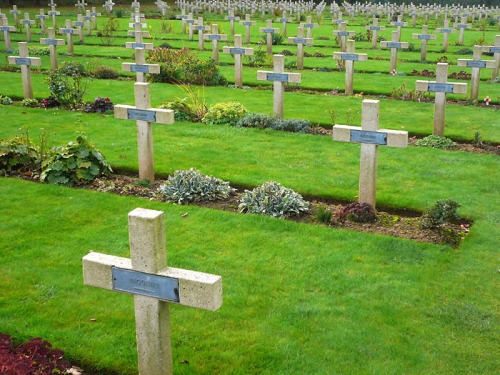 More important, though, is the enormous building itself wherein are recorded the names of the fallen who have no known resting place.

A large inscription on an internal surface of the memorial reads:

“Here are recorded names of officers and men of the British Armies who fell on the Somme battlefields between July 1915 and March 1918 but to whom the fortune of war denied the known and honoured burial given to their comrades in death.”

On the stone piers are engraved the names of more than 72,000 men who were slaughtered in the Somme battles between July 1915 and March 1918. More than 90% of these soldiers died in the first Battle of the Somme between July 1st and November 18th 1916. Here are some of the names.

Here are some of the graves in another, fairly large cemetery whose name I am afraid I cannot remember … 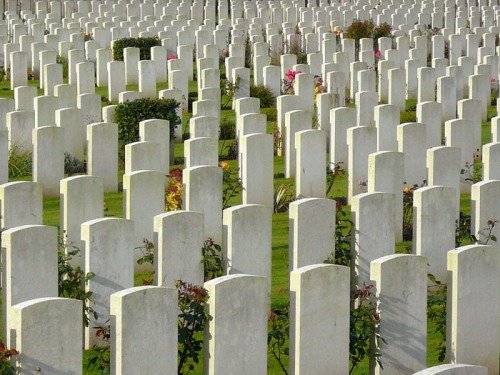 It is an insane thought that the Great War still continues to kill people nowadays. I was told by our tour guide that on average usually one person is killed every week as they explore the old battlefields looking for souvenirs.  This shell has been found by the farmer and has been left at the side of a country lane so that the regular patrols by the local council lorries can take it away. Only idiot foreigners, of course, touch these unstable objects. The French and the Belgians leave them alone.

This graveyard too I am afraid is one whose name I have forgotten. I remember that we went there because one of the other people on the coach had a relative who was buried there and he laid some poppies on his grave.

This is one of the few places where I saw French graves. France had approximately 1,397,800 men killed in the war, with a further 4,266,000 wounded, giving a total of 5,663,800 casualties. Nowadays there are many areas of the country, particularly in central and southern France, which remain unfarmed wilderness because of this conflict a century ago which left whole provinces chronically short of men. The population of Greater Manchester, the West Midlands and West Yorkshire added together is approximately 5.7 million.

This is part of the Tyne Cot Cemetery which is a burial ground for those who were killed in the Ypres Salient on the Western Front. It contains 11,956 men, of which 8,369 remain unidentified.

This is the “Tyne Cot Memorial to the Missing.” As mentioned above, the builders of the Menin Gate discovered it was not large enough to contain all the names, so the casualties after August 15th 1917 were inscribed on the Tyne Cot memorial instead. The memorial contains the names of 34,949 soldiers of the British and Commonwealth armies. The panels on which the names are written stretch away, seemingly  to the horizon.

Sadly, at Tyne Cot cemetery, there are always relatives looking for members of their family who fell during the Battle of Passchendaele in 1917.

It is very difficult to find a neat conclusion to all this, but I am happy to leave the last word to His Majesty King George V, speaking in Flanders in 1922…

“I have many times asked myself whether there can be more potent advocates of peace upon earth through the years to come than this massed multitude of silent witnesses to the desolation of war.”