The Greed of the Few

A few months ago, I went into a Salvation Army charity shop, which was surprisingly crowded with people looking for second hand clothes.  I was able to buy a very large pile of old BBC wildlife magazines which dated back some six or seven years to around 2007. It was interesting to see that all the concerns those few short years ago such as worries about climate change, the loss of wildlife habitat and the extinction of various rare species were pretty much exactly the same as they are now.
It was extremely interesting, though, to read an article by a gentleman called Richard Mabey who at that time was the vice president of the Open Society.

Mr.Mabey’s writing stood out from the rest as being so very different and so very perceptive. He wrote, for example, of the richness, the biodiversity, of the English language, which he said, prospers because of its very complexity and because so many words have so many different shades of meaning.
He then developed Charles Darwin’s phrase, the “Survival of the Fittest”. Quite rightly, he made the point that, in the past, this simplistic idea has been used to justify Communist oppression, worldwide slavery and the persecution of the Jews. Mr Mabey extended this idea though, to the present day, with the observation that the phrase is nowadays being used to excuse the ruthless greed that runs unchecked through the world economic system. One banker recently proclaimed, for example, that the forces of the free market are merely the “Survival of the Fittest”.

The most interesting point then made though, is that in nature, predation apart, one member of a species will hardly ever prove its fitness by directly killing another, weaker, member of that species. Mr Mabey argued, for example, that few, if any, animals indulge in bloody combat. Birds do not physically fight each other, but compete with song. Snakes may wrestle, but they do not usually use their fangs, and deer will not prolong their potentially life-threatening arguments, if their opponent exposes his unprotected flanks in a gesture of surrender.
When Darwin observed his famous finches in the Galapagos Islands, the thirteen different types of bird were not trying to eliminate each other forever, but instead were living more or less happily alongside each other.
They may have had differently sized or shaped bills, but all the birds were capable of exploiting slightly different food sources. Some birds drank nectar from cactuses. Some birds ate cactus seeds. Some birds stripped bark or chewed leaves or sought out ticks to eat. But all of these creatures were managing to survive alongside each other. 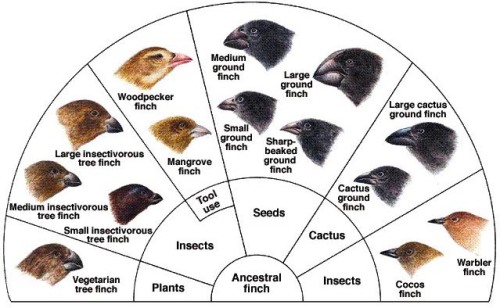 Different species will all be forced to fight their environment, but in the main, they are able to coexist together because of only slight differences between each one of them, differences which in the course of their lives, will always prevent direct competition.

In contrast, as Richard Mabey points out, the lack of regulation in financial markets merely allows the ambition and greed of a very small, very privileged and very hostile few to flourish without limit and without restraint. The financial world is then dominated by a very small number of what in nature would be seen as an aggressive super species. And it is ridiculous, of course, to justify this sad situation by bringing Charles Darwin into the argument.
Darwin’s Theory of Evolution is the complete opposite of this. Evolution produces tens of thousands, if not more, separate species, all of which to a greater or lesser extent, can exist alongside each other.
And to apply Richard Mabey’s arguments to the everyday human sphere, it does not take a major genius to work out that we may eventually finish up with, for example, just three or four gigantic supermarkets who will be able to dictate completely what we should buy and what we should eat.

There will be few specialist small businesses, selling their own spicy sausages made in the back of the shop, or cakes that the owner’s wife and family have made at home. There will be no handmade wooden toys for children, built by local craftsmen using their ideas as to what will be liked by their little customers. No health food shops selling organic food made by workers’ co-operatives. No butchers selling local meat and supporting local farmers by paying them a proper and decent price for what they have produced. No market stall which sells both British and Indian made fabrics, which young dressmakers can make into whatever they want.
Farmers will be driven to abandon all idea of leaving untended spaces where wild animals, birds, insects and butterflies can live. How can they afford to do this when a major supermarket offers them just four pence for a cauliflower, a price recently quoted to me by a Cornish farmer?

Take it even further and we will have a situation where bankers, whatever their performance, will be able to award themselves gigantic bonuses every single year. Vast corporations will employ armies of people, the majority of whom will be earning the minimum wage, which is itself lower, of course, than the living wage.
And all this because of greed-stricken people, programmed only to make the maximum amount of money, with precious few reasons that they can remember about why they have to do it.