On holiday with Ross Poldark (3)

Last time I was showing you more of the attractions at Botallack, in West Penwith, in western Cornwall:

I introduced the Crowns Mines which I called:

“the most photogenic industrial location in Cornwall.”

From the base of the stone chimney, a long sweeping path descends the cliff face. It goes down towards the Crowns Mines:

Their position is so dramatic that it attracts film crews like bees to honey. Here is a slightly different shot which includes what looks to me like the silhouette of Pan and below that, to the right, a number of faces in the rock. At least two gannets are visible flying past as just two white dots. Notice too, the croquet lawn right in the middle of the photograph:

There must be quite a few people who are frightened by the path, which is wide and flat with a substantial fence made largely of rust. To your left, there is a very, very long way to fall on to the sharp rocks below . If you do fall, though, make sure that you look to the right as views are tremendous.

These mines had tunnels which stretched under the ocean for several miles, allegedly. Equally allegedly, the miners could always hear the noise of the waves above their heads.

As you walk down, the two mines gradually grow closer. If I remember correctly, you can go safely into the right hand structure: 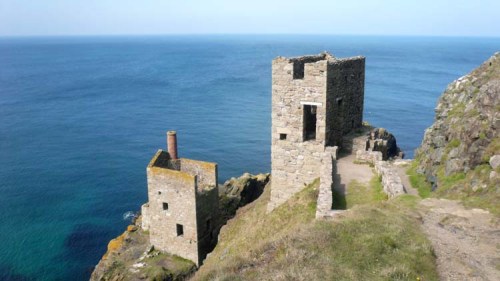 But the left hand tower is a very definite “No-No”. Or at least, you’ve got a very large queue of kamikaze pilots to contend with.
Still, it’s a wonderful location. The ocean is so blue and it is transparent enough for the rock platform underneath the waves to show up. Gannets are still passing by . There is one to the right of the right hand tower, just where the wall meets the ground. Again, if I remember correctly, it is impossible to climb to the top of this tower, although a door lets you in to see a very limited part of the ground floor.

This is the best shot I could get of the left hand tower.

Here is a comparison of the two mines then and now. If you look very carefully, you can see a lot of similarities but many differences, some of them the effects of a hundred years’ plus of Atlantic storms:

The path leading back up to the main group of ruins is quite steep but you’re not going to get lost with such a landmark to guide you:

How long it must have taken to quarry the stones to build this impressive edifice! It’s certainly lasted a lot longer than the men whose toil and sweat erected it:

Back at the top, among the ruins, I found some intriguing graffiti. This first one could fire at least a couple of romcoms: 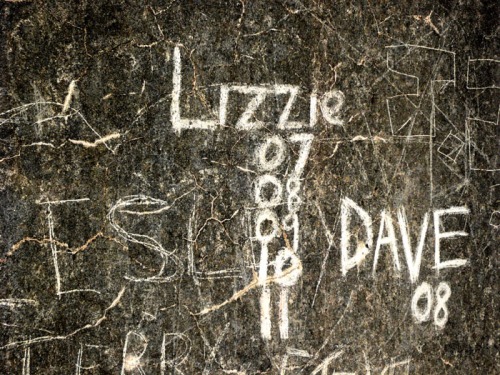 And this is a full length effort, vandalised by some moron, unfortunately:

My last memory of the place will be watching a couple of retired BBC planners (click on the picture to enlarge it, and they are on the cliff edge). They are working out the cost of a modern Poldark sequel starring Jeremy Corbin as Poldark’s charismatic youngest son and Vladimir Putin as George Warleggan:

How many times have you walked out of the school’s Forest Road gate, and quite simply, failed to notice the extensive collection of carved initials on the left hand pillar? And if you did notice them, did you disregard them as being just more of the pointless graffiti that we are now forced to accept in the society of the early twenty first century? Or did you carefully look at the dates? But just wait awhile, gentle reader, and imagine the scene to yourself…

It is late 1942.  In Europe, Hitler stands on the opposite side of the English Channel, watching Dover through his binoculars.

Great Britain remains resolutely defiant, but largely unable to press home any significant advantage. The British  armed forces are quite simply, not strong enough. There have been hardly any significant victories so far for the British, and there seem to be few obvious ways forward to rid the continent of what will eventually become known as “The Scourge of the Swastika”. Only the victory by Montgomery at El Alamein in North Africa lights up the Stygian gloom. And how many British people actually realise at the time the real significance of the telegram General Friedrich Paulus sends his Führer, telling him that the German Sixth Army is now completely surrounded? 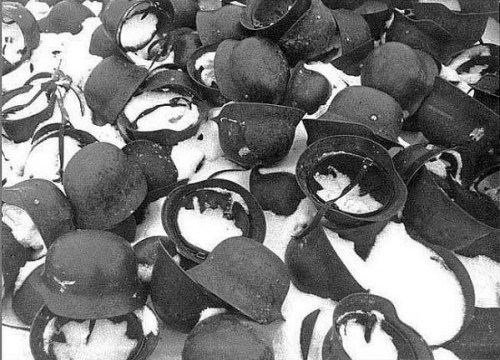 These dark days are recalled on the Forest Road entrance of the High School, where boys, or, more likely, young men, have carved their initials more than seventy years ago. And some dates, and even a slightly misunderstood swastika.

Judging by the physical height of this insolent vandalism, they may well have been in, say, the Fifth Form, literally, upwards. They include what appears to be “WH 1942”, “DP” and “DP 1942”, along with what may possibly be “SS 1940”, and the undated “MB”, “HE”, “HS” and “PFP”. Indeed, the only problem with these initials is that they are extremely difficult to photograph, because, like other interesting acts of vandalism, they are hidden away from direct sunlight, and the subleties of the various shades of stone have proved beyond the capabilities of my camera, even though it does have quite a decent lens. Only Photoshop has dragged the past out into the present.

My subsequent researches, and best guesses, have revealed a few likely suspects. “WH” and “DP” may conceivably have been young colleagues in the Fifth Form A with Mr.Whimster during the academic year 1941-1942.

William Norman Hill was born on November 23rd 1927, and entered the High School on September 20th 1938 at the age of ten. His father was Mr F.Hill, a School Master of 8, Lexington Gardens, Sherwood. He left the school on July 31st 1945.

Dennis Plackett was born on October 22nd 1927. He entered the school on Monday, September 25th 1939, at the age of eleven. His mother was Mrs.Ellen Plackett, a housewife of 7, Anthill Street, Stapleford.  Dennis was a gifted young man, a Nottinghamshire County Council Scholar, and he left the school on August 1st 1944.

Another interpretation is that “WH 1942” was William Jack Harrison. This young man was, quite simply, outstanding. He was born on December 5th 1924, and entered the High School on September 19th 1935 at the age of ten. His mother was Mrs E.M.Harrison of 53, Burlington Road, Sherwood.  He would have been in the Upper Fifth Form with Mr.Palmer in 1941-1942, and then in the Mathematical and Science Sixth Form with Mr.Holgate during the academic year of 1942-1943. William stood out in two separate areas. In 1940 he was initially a Lance-corporal in the Junior Training Corps, but he soon became a full Corporal. In 1941, he won Mr Frazier’s prize for the most efficient Junior NCO or cadet, and was then named Commander of the Most Proficient House Platoon. At some point towards the end of the academic year of 1941-1942, he promoted to be the Junior Training Corps Company Sergeant Major.

In addition, in the sporting world, by the time the School List for 1942-1943 was published, William had won his First XV Colours and his Cap for Rugby and had been named as Captain of Rugby. In the Summer Term, he went on to be the Captain of Cricket, and to be awarded his Cricket Colours and his Scarf. He was also, by dint of his sporting position as Captain of Cricket, a School Prefect. William left the school on December 19th 1942.

The reason that I myself would prefer this interpretation is that “DP” and “DP 1942” may well be David Phillips, who was in the Economics Sixth Form with Mr Smyth during the two academic years of 1940-1941 and 1941-1942. He may well have been carrying out some kind of school tradition when he carved his name and the date on the pillar, knowing that he was going to leave the school in July 1942.

David was born on May 2nd 1923, and entered the school on January 13th 1935 at the age of eleven. His father was Mr P.Phillips, a Factory Manager of 45, Austen Avenue, on the far side of the Forest Recreation Ground.

We have relatively few details of David’s career at the High School, but we do know that by September 1941, he was a Corporal in the Junior Training Corps. In the Christmas Term of 1942, he was awarded his Full Colours for Rugby, and he became a School Prefect. David was also awarded his Rowing Colours for his achievements with the Second IV.

I have a very strong feeling that these two young men were friends. Austen Avenue, of course, is arguably, on the same cycle route home as Burlington Road, Sherwood, where William Harrison lived.

Perhaps the two walked down together across the Forest Recreation Ground, and David would then get on his bike and cycle slowly off towards Austen Avenue. William would continue down what would have been at the time an undoubtedly more traffic free Mansfield Road, towards Burlington Road in Sherwood.

David Phillips shared the very same interests as William Harrison. They were both in the same rugby team, and both seemed to have loved sport, whether rugby, cricket or rowing. They were both in the Junior Training Corps and clearly were attracted to the military life. As regards their academic classes, they were a year apart, but I feel that their common interests would have overcome this difference, especially when the two rugby players, or Junior Training Corps members, realised that they could walk down across the Forest together every evening after a hard day at school.

And when the end of 1942 came round, they may well both have left the school on the same day, December 19th. Were they both going into the Army together?

The interpretations above are all based on a combination of informed best guesses, a thorough search of the relevant School Lists and registers and the usual human desire to take purely circumstantial evidence as proven fact. Not surprisingly, though, it has proved impossible to trace any of the other initials in any meaningful kind of way. There were quite simply too many possible “SS”s in 1940, and “MB”, “HE” and even “PFP” have all proved equally beyond my powers. Even so, this must be among the oldest graffitti in Nottingham.