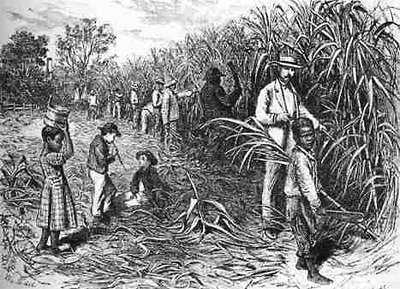 Unbelievably, a decision was taken that the government would use taxpayers’ money, taken from the ordinary man in the street, to buy the owners’ slaves from them. This was a very cunning plan on so many levels. The government remained popular with the rich people. The rich people who owned no slaves remained rich. The rich people who owned slaves also remained rich. Nobody lost any money whatsoever except the poor old taxpayer, who now had to wait a little longer for his free medical care, free education, sanitation, decent roads, law and order in the streets and so on.

And what about the slave owners? 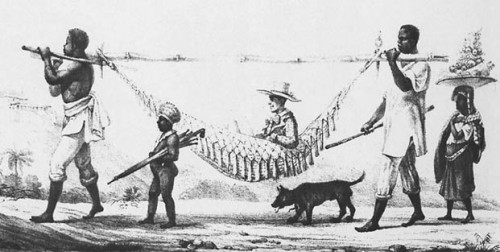 Well, by this windfall, they became even more unbelievably rich. And then they went on to invest their cash in other ventures so they could make even more money.

They didn’t hate the politicians who had abolished slavery either, because the slave owners had suddenly been made so rich by their actions.  You can probably guess who came out of it badly…

The population of black ex-slaves who now had nowhere to go. They couldn’t go down to the docks and catch a boat to West Africa. Instead they had to stay where they were and work for a pittance at their old job. This man’s family (218 slaves) made a good profit on the whole deal. They received £4,442 compensation, the equivalent of £3 million today. Don’t know who he is?: 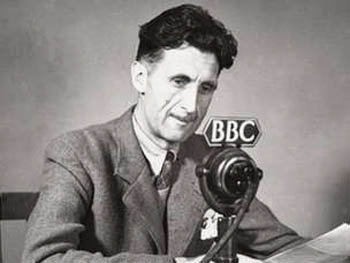 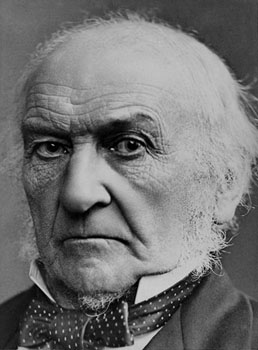 What do you do with your freed slaves? (3)

I suppose that the major problem with abolishing slavery is knowing what exactly to do with this newly created army of probably uneducated people, who may well be quite ill fitted to deal with an independent life. Jefferson, the man who coined the expression “all men are created equal” seems to have supported a gradual process, with slaves being first educated and then freed as they reached adulthood: 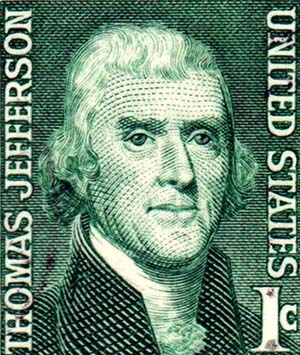 Apparently he later realised that this would created an inadequate return on the slave owner’s investment, if that’s the word, and altered the age of freedom to 45. After that, they would be taken back to Africa:

Overall though, mainly for various personal reasons, Jefferson did not have a lot to say about slavery.
He did recognise one dilemna though.

“There is not a man on earth who would sacrifice more than I would, to relieve us from (slavery).
We have the wolf by the ear, and we can neither hold him, nor safely let him go. Justice is in one scale, and self-preservation in the other”

Jefferson was not the only one to have worries about “safely letting go” the country’s slaves.. In 1806, the Virginia General Assembly grew so concerned about the number of free black people living in the state that they changed the law to make freeing slaves more difficult.  From 1790-1810 the population of black people there had risen from virtually nothing to more than seven percent. In Delaware, they too were worried about freeing their slaves. By 1810, 75% of the state’s slaves had been given their liberty.

Many of these politicians were equally worried about the influence Haiti might have on the thinking of black people in the USA. Around this time, of course, Haiti was a revolutionary state on an island in the Caribbean to the south of the USA. A little like a black Cuba rather than a red one: 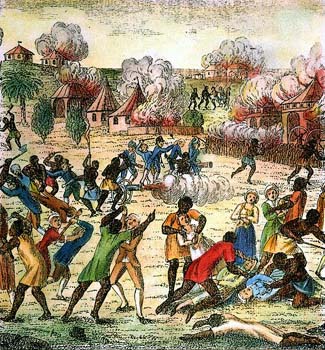 And presumably, the Americans did not want similar scenes of bloody revolution in their own southern states: 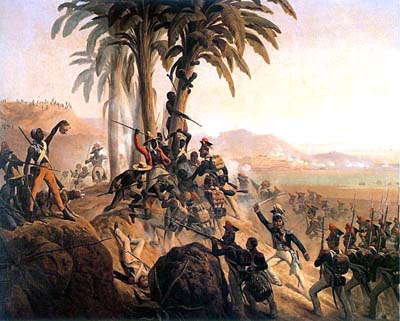 In 1801 President Jefferson was delighted to see the French intention to take back the island and thereby stop it becoming a base which might foment black revolution in the United States. He loaned the French $300,000 “for the relief of whites on the island.”

The southern slave owners in the US, of course, were just as scared of similar rebellions in their own states as President Jefferson. He said of this dilemma:

“If something is not done and soon, we shall be the murderers of our own children.”