The Battle of Britain (2)

Deep in the bowels of the RAF Museum at Hendon is the Battle of Britain section where the lighting is of a strange purple colour so that delicate ancient paint is not faded by direct sunlight. That’s an extra excuse for these rather weird photographs. First of all, the baddies, with that old favourite, the Junkers Ju 87 Stuka, an aircraft used in the blitzkrieg to dive bomb defenceless refugees:

Here’s a Heinkel He111 which was all right as a bomber but which didn’t carry a particularly significant bomb load. Even so, it performed well at Guernica, Rotterdam, London, Warsaw and half a hundred other places as the Germans invented the much criticised concept of “area bombing”.

The fighters were the Messerschmitt Bf110, a rather slow aircraft for daylight use which would eventually finish up having to be escorted by better performing fighters:

This is the Junkers Ju 88, a twin engined and very versatile aircraft which was arguably, a competent Bristol Blenheim or a poor man’s De Havilland Mosquito:

Last and certainly not least is the famous Messerschmitt Bf 109, a decent fighter, but an aging design which was prepared in response to a Reichsluftfahrtministerium specification of 1933. Bf 109s couldn’t carry enough fuel to fight for very long over Southern England. And a Spitfire, in theory, could always escape them by turning tightly inside them:

The Bf 109 at Hendon does not really allow you to stand back and get a decent general photograph. Here is one I found on the Internet. It certainly is a stunning photograph: 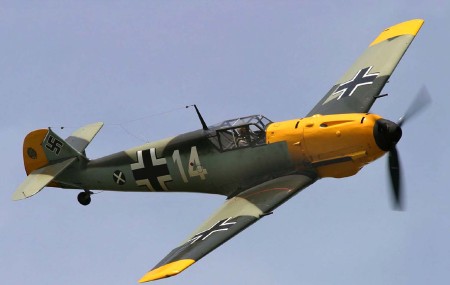 The Hendon individual is a Bf 109E-3 and it may have been painted as a yellow nosed member of Jagdgeschwader JG26, “The Abbeville Boys”. There must have been a little plaque in front of it, but I can’t remember what it said. Its detailed history can be accessed here.

And in the blue corner…….the Supermarine Spitfire. Here’s my effort at a picture:

As one writer said,

“It was one of the most beautiful aircraft ever conceived with elegant, flowing lines that make it look perfect from every angle.”

And the most stunning Spitfire ever was the Mark I or Ia or the Mark IIa.

This gallery of photographs comes from the Internet. With a little bit of luck, you should be able to see what I mean about a beautiful aircraft:

And there’s also a Hawker Hurricane, an aircraft which, as we all know, shot down more German aircraft in the Battle of Britain than the Spitfire. The scores were roughly 60% to 40%. The Hurricane was a design which looked backwards to its biplane ancestors, especially the Hawker Fury: 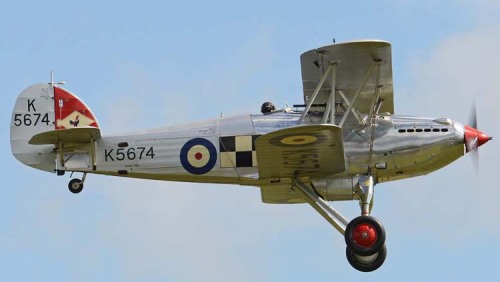 And now some proper photographs:

And next time, the Old Nottinghamians make an appearance.