Nearly a thousand years ago

In  a recent blogpost, I told the often harrowing tale of how what appeared to be a small army of men descended on our hitherto tranquil house, and after a period of some four days, managed to install both a new central heating system and a multi-fuel stove. Most interesting, though, was the tiling revealed in the back bedroom, when the old radiator was taken off.

There was no trace of a fireplace ever having been behind this tiling and we were told that it appeared to be a practice exercise, perhaps carried out by a young apprentice, and placed on the bedroom wall in 1932 to echo the fireplace in exactly the same position one floor below. In the 1960s, we think, the house was given its first dose of central heating and the young man’s work from thirty years before was covered over and lost. Being a sentimental and nosey old fool, I always wonder about the ordinary working men and women who laboured for such brief moments in endless time and whose work may, paradoxically, then sometimes go on to last for so many years, long after the deaths of the people who made them. Working men are born, live their lives for good or bad, and when they are gone, they leave little trace behind them. And once their grandchildren pass on, those men are then banished for eternity to “Trace your Ancestry” websites, as just names on forms, too far back in history to connect with. Did this apprentice tiler go on to fight in the Second World War? Did he survive? And the man who gave him the job to do – had he come back from the Somme a mental wreck of what he had previously been?

Nearly ten years ago, I went to visit Lincoln Cathedral, which has a fascinating parallel to the tiling exercise, except this one is getting on for being a thousand years older. This early medieval practice exercise is for carving lots of little squares with decorative flowers in the middle. Even twelfth century boys will be boys, though, and instead of a flower, one bright spark has carved a bird’s nest, complete with baby birds.

On the right, somebody has carved one of the adults, arriving with a worm in its mouth.

And on the left, there is the other parent flying away, its beak empty, in search of more food for their hungry offspring.

Those inventive young men of the twelfth century, however, were not to realise that one day, a tower in the very cathedral that they had had the privilege of helping construct, was to play host to its very own parent birds, a pair of Peregrines.
They are not easy to film!

This is “Lincoln’s Falcons” by Mark Taylor

Not everything always goes to plan! This is called “Peregrine falcon chick saved after fall” and comes from the local newspaper, the Lincolnshire Echo.

Even more interesting, though, are the medieval man’s opinions of his bosses. Asked to carve decorative heads onto the rood-screen, the stone carvers have obediently done so, but at the same time, they have taken a golden opportunity to transform important people, such as their foremen, into cartoon figures, with big noses and stupid expressions. I cannot believe that these carved faces were unrecognisable to the stone carvers’ contemporaries.

Martin, always over eager, with his big fleshy lips… 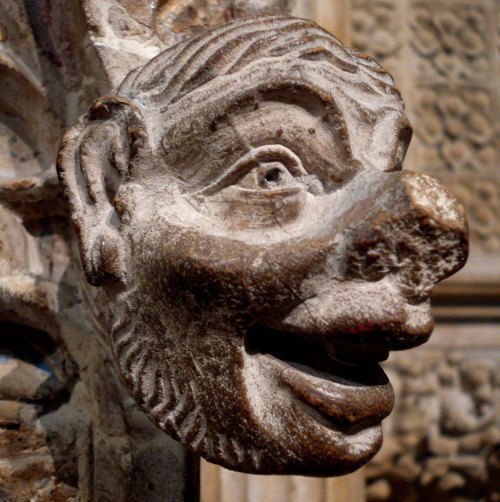 Will with his big nose…

Jack, what a chubby little chap!

Greedy Tom with his pig’s ears…

Stupid Henry with his donkey’s ears…

Harry, turning into a mouse… 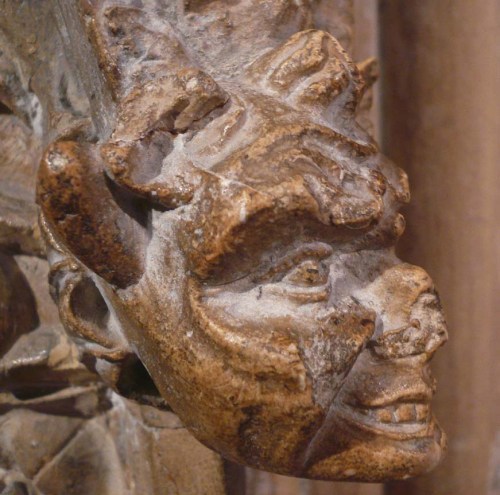 The priest with his buck teeth and drooling tongue… 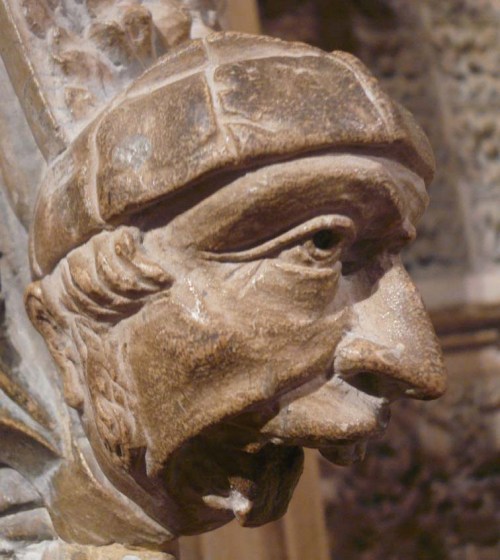 Even the bishop looks as if he is about to explode, with either anger or constipation… 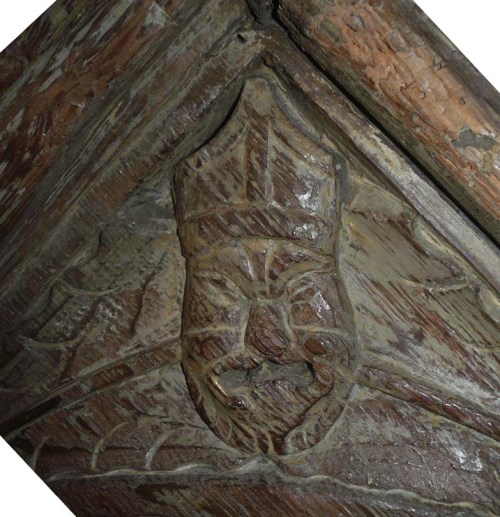 In the ancient castle nearby is the religious graffiti carved by bored guards during a long forgotten night around 1350 or 1400, as they waited to take the condemned man out to be hanged the next day…

Most of all though at Lincoln, I love this old ring, set into one of the internal walls of the cathedral. This is where Oliver Cromwell’s troops tethered  their horses, when the Roundhead cavalry was stabled inside this lovely old cathedral during the English Civil War.

What a magnificent building.

For a short period in the Middle Ages, when the towers had their spires, it was the tallest structure in the world.

Filed under History, My House, Wildlife and Nature

The monster lurked in the crowd

This is my first attempt at being creative in a blogpost. Given the subject matter I have chosen, World War I, or the Great War as it was called until 1939, it would be easy to offend people. That is not at all my intention. Indeed, I am trying to draw the attention of the living to just how much those 888,246 young casualties were asked to give up….all the rest of their young lives, the wives and husbands they never had, the children, the careers, their quiet old age. Everything.
Cue the first section of this well-known song, written by John Lennon…

Well, to be absolutely precise, not just one lucky man, but all 888,246 of them.
Every single one, in actual fact, of the military fatalities of World War One from Great Britain and the British Empire, each one of which will be commemorated by a ceramic poppy, planted on his or her behalf in the dry moat of the Tower of London.

“And though the news was rather sad
Well, I just had to laugh”

Well, I felt closer to crying actually.  So many young men were slaughtered, so many young lives came crashing to a halt, and above all, the unknown potential of so many young minds was snuffed out.

What might some of those 888,246 young people have discovered for the benefit of the rest of Mankind? And how would all of them have spent another fifty or sixty years of family life, if they had been lucky enough to have had one?
The war started more or less, by pure chance.

“On Sunday, 28 June 1914, Franz Ferdinand and his wife were killed in Sarajevo by Gavrilo Princip, a member of a group of assassins organized by the Black Hand. Earlier in the day, the couple had been attacked by Nedeljko Čabrinović, who had thrown a grenade at their car. However, the bomb detonated behind them, hurting the occupants in the following car. On arriving at the Governor’s residence, Franz angrily shouted, “So this is how you welcome your guests — with bombs?!”
After a short rest at the Governor’s residence, the royal couple insisted on seeing all those who had been injured by the bomb. However, no one told the drivers that the route had been changed. When the error was discovered, the drivers had to turn around. As the cars backed down the street and onto a side street, the line of cars stalled. At this same time, Princip was sitting at a cafe across the street. He instantly seized his opportunity and walked across the street and shot the royal couple.”

“I saw the photograph.
They blew his life out in a car.
He didn’t notice that the route had changed.
A crowd of people stood and stared

They’d seen his face before

What a pointless reason for the deaths of millions and millions of people, not just from this country and the British Empire, but from our fellow members of the present day European Community: Belgium, France, Italy, and of course,  our good friends in Germany and the USA.
The total number of deaths worldwide, was between 15,163,603 and 17,989,782.

“I saw a film today, oh boy
The English army had just won the war”

“A crowd of people turned away”

Perhaps they were disgusted when they were told that the paperwork for the Armistice had been signed at 5.00 a.m. but that 11,000 more men were to be killed over the course of the next six hours. And of course, there were lots of excuses at hand for this heartless bungling by people to whom the ordinary soldiers’ lives were, ultimately, of little or no consequence.

Worse than that, in many places on the front line, well after that 11.00 a.m. deadline, combat continued, and men died pointlessly.

“But I just had to look
Having read the book”

There is no record of who looked after and loved those 40 million horses, dogs, pigeons and other animals which perished.

Nobody will ever know what the world could have done with the £109,000,000,000 that was spent on the conflict.
And just in case you didn’t know, here is how a very large proportion of those desperately young men were to end their lives…. 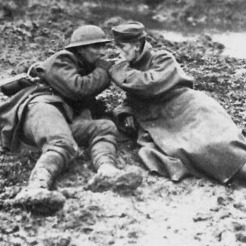 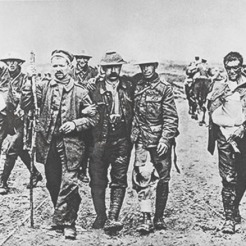 The real monster lurked in the crowd… 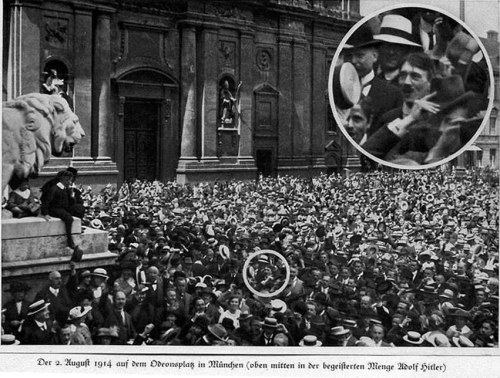