A Twitch to Kent : Day Three

I am on a weekend minibus trip to Kent in an effort to see rare birds which have been blown off course on their migration. So far we have managed to see a Glossy Ibis and an Isabelline Shrike.

There is still no Richard’s Pipit, so as a total last resort, we start looking around for our own birds. As a strategy, it is totally ludicrous. We find a male Brambling on some recently ploughed fields:

Then we meet one of the wardens who is wandering around looking for all the world like a refugee from Woodstock. He asks says if we’d like to see something really impressive. I personally don’t want to go into the bushes with him, but everybody else does. It turns out to be a second male Brambling that he has just caught in the nets, and to be fair, it is a very beautiful bird indeed, in far better plumage than any other Brambling that I have ever seen:

We spend half an hour in some other bushes looking in vain for a Firecrest, the smallest bird normally encountered in the wild in England. It is a very rare bird in our own county of Nottinghamshire: 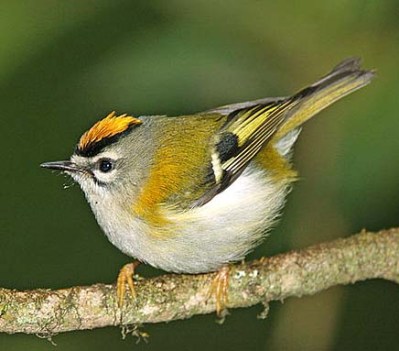 We are just beginning to lose interest when suddenly someone runs up and shouts that there is an Olive-backed Pipit at the Observatory. It has been caught in their nets within the last half hour and has been taken inside the building to be weighed, measured, and then ticked off. The wardens  have promised to keep the bird in a nice comfortable bag until everyone has got there to see it released.
Nevertheless, I just have to run. I might be fat, but when I have to move I can. It’s a little bit
like a hippopotamus on its way to the water hole, not elegant but very effective, at least up to a range of 100 yards or so. I just manage to avoid a heart attack, by jogging the last bit fairly sedately: 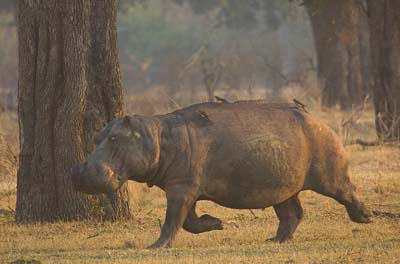 There is a good crowd of people there already. I go into the office to watch the bird being weighed and measured. All I manage to see through the crowd of people, though, is the back of the bird’s head, emerging incongruously between two of the fingers of the warden holding it. Does that qualify for a tick?
It’s a bit like saying you’ve seen Bruce Willis just by seeing the top of his bald head in the middle of a crowd of security men.

I do know somebody who actually ticked Golden Oriole based only on the top of the bird’s head visible over the edge of the domed nest, emerging only as the wind rocked the whole precarious structure: 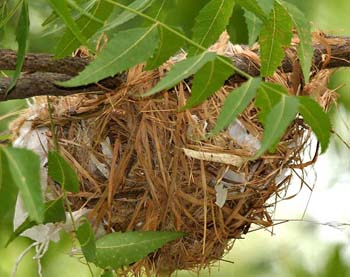 Surely this, though, is unique in its desperation.  Let’s hope so. A real Golden Oriole is a bird well worth seeing in its entirety:

After a token ten minutes’ delay, the warden brings the Olive-backed Pipit onto the area of grass in front of his office, removes it from the bag, and holds it up to the fully assembled multitude to look at and photograph.
Not a particularly spectacular bird, even if it is a very rare one. It’s a lot drabber than I imagined and doesn’t as far as I am concerned, have a lot of olive on the back. It’s a rich rather brown colour, with heavy streaking and spotting underneath:

Unfortunately, I forget that there is an important black spot behind the eye which is a diagnostic feature and which I should be looking for. Never mind. It can’t be that obvious anyway, or else I would have noticed it.
Certainly, in the subsequent photographs of the bird that I buy, this feature is not outstanding by any stretch of the imagination:

After ten minutes or so of being paraded around like a sporting trophy, the pipit is taken to a nearby field and released. It disappears into the adjacent wood like a bullet from a gun. It seems pleased to exchange its fifteen minutes of fame for the chance to get back to the serious business of looking for insects on the floor of the forest.

Nowadays, Olive-backed Pipit is not really a very rare bird in England. A couple of years or so after this, I managed to see a much more obliging bird, in the woods near the beach at Holkham in north Norfolk. This individual had never seen human beings before, and, if you stood absolutely still, was happy to approach you very closely. Indeed, as I leaned against a handy tree, it actually came so near to my feet that my binoculars would not focus on it.

A Twitch to Kent : Day Two

In a previous article, I told the story of going down to Kent in a minibus in an effort to see rare birds, or, at the very least, some different species to those in Nottinghamshire. On the Friday, we saw a Glossy Ibis: 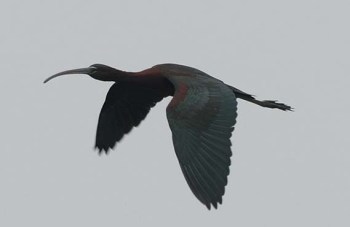 “Next day sees us up at the crack of dawn, to look for the Mediterranean Gulls that are supposed to frequent nearby Copt Point. This is reputed to be a very good place for them, with up to 40 or 50 of them at the right time of year. It should be easy. Black-headed Gull bad: 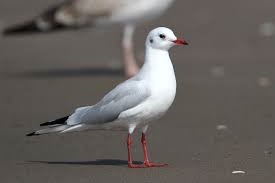 We are out on the promenade at the first light of dawn, but we don’t succeed in finding any. We dofind a Yellow-legged Herring Gull. The clue is in the name:

There is a juvenile Kittiwake too:

Apart from these moderately interesting finds, we are totally unable to find our quarry.

This is not in actual fact totally surprising, because, as it emerges in conversation at breakfast, we were not even at the correct place.

I suppose in retrospect that the bay were looking at was not a great candidate to be called Copt Point, but as strangers we knew no better, and we were given no directions. We should have been about half a mile further north of where we were, so we all go there first thing after breakfast. I am a little embarrassed . I have never failed to find a major landmark before.
We spend half an hour here, and soon find the Mediterranean Gulls. There are about six of them, mostly in winter plumage, sitting out on the rocks near the sewage outlet, about 50 yards from the beach. There are hundreds, if not thousands of Black-headed Gulls, but the Mediterranean Gulls stand out quite well, with their more thickset appearance, and their all white wing tips. Black-headed Gull bad. Mediterranean Gull good:

They are still relatively boring though. This will not be the main bird for the day, thank goodness, because we have had a tremendously lucky break. After trying to convince everyone yesterday that it might be a good idea to drive to Dorset to see the Isabelline Shrike, we find out that a second bird has been found at Sandwich Bay, just a few miles up the road from where we are, and adjoining the famous golf course.
We scurry over there in the minibus, everybody greedily totting up another potential tick on their life list.
Everybody is so excited . Isabelline Shrike will be a tick for everybody. There is a Richard’s Pipit there too, which will be another tick for me and a good few others:

There is a Yellow-browed Warbler, which will be a third tick for quite a few people. Everything looks good:

As we arrive, we see a crowd looking very intently indeed at a closely cropped meadow, just the place for a Richard’s Pipit.
We rush past them all, after checking with someone that the pipit is still there.
This is a major mistake, but we are all overwhelmed by the desire to go off and see the Isabelline Shrike, which is a much rarer bird. It is quite a walk, just the distance to get the adrenaline flowing.
When we arrive, there’s quite a crowd, all standing on the opposite side of the railway track, looking back into the overgrown hedge which runs alongside the rails. Suddenly a train arrives and the great whooshing noise as it goes past persuades the shrike to move out of the foliage and to perch out in the open:

It is a rather bland bird, completely buffy brown, with the beginnings of a hooked beak, and the most obvious feature of all, a fairly bright red tail. It is clearly nothing like a Red-backed shrike, and I can understand why the two new species have been split from the one old one.
Now we go back for the Richard’s Pipit, only to find that the people there were all looking at what was in fact a Common Redstart, not a particularly rare species at a migration spot like this: 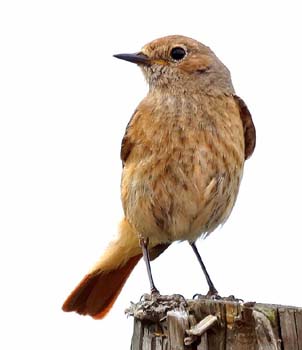 Nevertheless, we give it an hour or so for the pipit, looking around the neighbouring fields where the warden says that the bird has been seen over the past few days. No luck, I’m afraid. Now the day just degenerates into rumour and counter rumour. We hear that Trumpeter Finch has been seen and heard flying over, but we dismiss that out of hand: 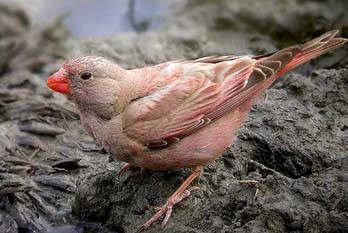 Little do we know that we are just a couple of hours from the discovery of what, at the time, was a very rare bird indeed.

Nowadays, almost thirty years later, Isabelline Shrike has been split into three different species. One is called Turkestan Shrike, the second is Daurian Shrike and the third is Chinese Shrike. The bird we saw at Sandwich was one of the most frequently encountered  types in England at the time, and I think nowadays, it would have been listed as a Daurian Shrike. I used to get very hot under the collar about things like that when I was younger. But now,  I realise that it’s just somebody who wants a couple more ticks than they would have got in 1988.