Last time I was looking at a postcard sent to Noel George Peet of 2 Gorsey Close in Mapperley Park. The postcard was sent on October 27th 1926 and it was stamped with an 8.00 pm postmark. Here is the sender and the message:

It reads “Sorry! I shall be unable to play on Saturday next.”

I would say that the signature is of “JG Sykes”. October 27th 1926 was a Wednesday and JG Sykes is clearly writing to the person who organises a local sports team, probably the captain or the secretary. At this time, Noel was only 24 years old and I would therefore presume that he was the captain of the team, rather than the secretary, who is the man who organises the fixtures, the renting of the pitch and so on. At first reading, I would have said that the team was probably the Old Nottinghamians and that they were going to play rugby, but there is one big problem about this best guess.

JG Sykes did not go to the High School. It cannot be a local cricket team in late October, so it must be football, or soccer as my American friends would term it. Between 1914-1968 the High School did not play football, at least officially. There were, though, one or two renegade teams which I intend to talk about in a separate blog post. All I can offer, therefore, is that JG Sykes and NG Peet were members of a local football team, unconnected directly to the High School. Which one, I cannot imagine. Sherwood United? Mapperley Rangers? Who knows?

I did though, find out who JG Sykes possibly was. In the Kelly’s Directory for 1928, this entry appears:

That is “James Gordon Sykes of 97 Mansfield Street, which I feel should be written in that same old fashioned way, as “Mansfield-street”. However you write it, Mansfield-street is deep in the heart of Sherwood, the suburb, of course, rather than the leafy place where the Merrie Men hang out. The orange arrow points to Mansfield Street which does in fact continue northwards over Winchester Street.  If you look at where “the Yellow Road to Woodborough” goes off the bottom of the map, the letters “-RSEY RD” to the left refer to Gorsey Road.

In the bottom left corner is the double roundabout only a hundred yards from the High School. Clearly, as regards games of football, this really was a local team for local people.

Sooooo…….what’s on the postcard? Well, James Gordon Sykes clearly knew his captain’s educational ancestry because he chose this beautiful scene. The front of the High School: 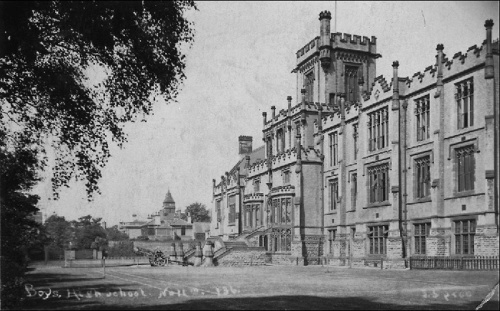 And there have been one or two changes since, say, 1920. A lot of pinnacles and chimney pots have been removed, presumably in the days before the concept of listed buildings was invented. The School field gun has gone. Here’s the School in more recent times: 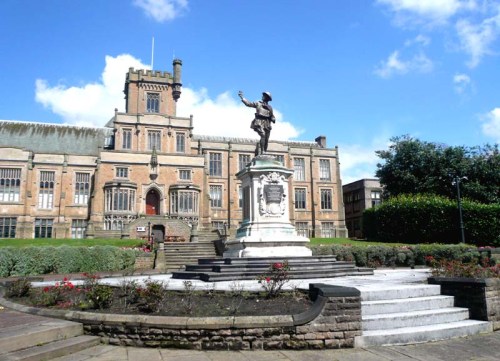 The photograph for the postcard was taken from over on the right, behind the bushes and the hedge. Most noticeable, though, is the war memorial which has been there since 1922. On the top is a life size statue in bronze which represents a young officer leading his men into attack. The statue was designed by an Old Nottinghamian, Colonel AS Brewill, the commander of the 7th Sherwood Foresters and it was cast in bronze by Henry Poole.

Just over 1,500 boys and masters had fought in the Great War. Two Victoria Crosses had been won, 124 men had been awarded other decorations, and 29 had been mentioned in dispatches. Most important of all, though, was the fact that between two and three hundred men had been killed, from a School which had an annual total of between 350-450 pupils in the years before the war.

The only other object in front of the School before 1922 was a 25-pounder field gun which somebody had brought back from the war as a souvenir. I haven’t been able to discover who it was, or exactly when or indeed, why. After four years of a war memorial and a field gun within thirty yards of each other, a decision was taken to remove the gun and have it made into ploughshares somewhere. Even then, the gun had its supporters:

” In July 1926 the Old Boys’ Society spoke out against the removal of the field gun from the front of the school. They felt that its barrel provided a wonderfully useful litter bin for the boys walking past.”

The building behind the gun is the caretaker’s house, demolished long ago. The tower is still there to this day. It is nothing to do with the High School or the caretaker’s house. It belonged to a man who was extremely keen on the horse races which were held nearby until 1890 on what is now the Forest Recreation Ground . He therefore had the tower added to his house so he could see if he had won or lost his money. The last meeting took place on September 29th-30th 1890, and the last race, the Cotgrave Gorse Plate, was won by Sir Hamilton, owned by Mr T Tyler, and ridden by A Nightingall. Horse racing subsequently moved to Colwick.

Just to finish, here’s an aerial view of the School taken in 1920 or thereabouts. It is isn’t of very great quality, but then again neither was the camera or the plane:

Notice the shrubbery, Dr Dixon’s house on Waverley Mount, AKA the “Last House on the Left”.  The caretaker’s house is opposite and notice the boys near to it. Top left is the Fives Court and Brincliffe  School still stands to the right of that, where the staff car park now is.

The back of the School was very different then. Here is the North Entrance in 1915:

Notice the bell tower and the extra flag pole.

One last fact about Noel Peet by the way. I have only just realised where he has appeared before in the context of my blog. His name is to be found carved into the mantelpiece of the fireplace between the General Office and the Assembly Hall. You can read all about that here.