His mission was to drop propaganda leaflets for the occupied French, so they could read the real truth about the war for themselves.

Alas, Robert Renwick Jackson died that night along with his navigator. The upper and rear-gunner, Sergeant TS McNeil, survived and became Prisoner of War No 27276 at Lamsdorf, then in German Silesia but now in south-western Poland. Here’s a typical POW camp: 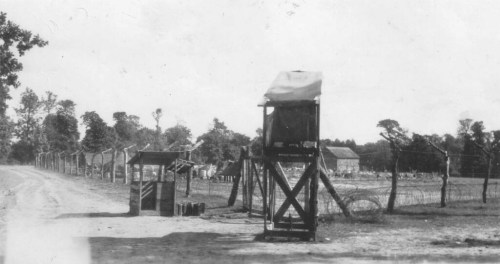 And here’s a hut nowadays:

The second casualty in the Boston was Peter John LeBoldus, the navigator, who would have been sitting in the nose of the aircraft. His name is virtually unknown in England, but he is better known in Canada. His parents were John LeBoldus and Regina LeBoldus née Weisberg, German Catholic immigrants who had six sons and six daughters. John was a hardware and implement dealer. The family lived in Vibank in Saskatchewan. One of the highlights of Peter’s very short life must have been taking tea with the Queen Mother and the Princesses Elizabeth and Margaret at Windsor Castle with a group of newly arrived Canadian Airmen in England.

On this particular night, Peter John was preparing for the mission and his brother Martin, also a member of 418 Squadron, but working as a mechanic, had helped him put on his flying clothes and his parachute harness. This was the last time the brothers ever saw each other. This is Peter LeBoldus:

Peter John LeBoldus is buried next to his friend, Robert Renwick Jackson, in Grandcourt War Cemetery.

Sadly, Peter John was not the only member of the LeBoldus family to die in the war. John Anthony “Johnny” LeBoldus was a member of 142 (RAF) Squadron, where he was an air gunner in a Vickers Wellington Mk X, serial number LN566, squadron letters QT-D, “D-Dog”. They took off from RAF Oudna in Tunisia on November 24th 1943 to bomb a ball bearing factory at Villar Perosa near Turin, at the very limit of their range. Extreme weather with wind, cloud, fog, rain, and ice caused the loss of 17 aircraft and 73 men were killed. “Johnny” LeBoldus was one of them: 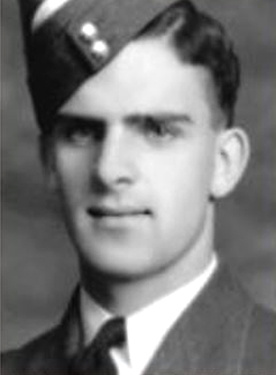 The third LeBoldus brother to die was Martin Benedict LeBoldus, the same man who had helped his brother, Peter John, with his flying clothes and his parachute harness before his death in Boston AL766. Martin Benedict was killed on February 20, 1944 at the age of 31. He was the flight engineer in a Handley Page Halifax Mark II of the Canadian 419 ‘Moose’ Squadron in Bomber Command, serial number JD114, squadron letters VR-V, “V-Victor”. On February 20, 1944 he and his colleagues took off at 23:12 from RAF Middleton St George near Darlington to bomb Leipzig and they were never seen again. Six other men, with an average age of twenty four, were also killed. John Leslie Beattie, Thomas Gettings, Alfred Harvey Hackbart, Donald Clifford Lewthwaite, Douglas Keith MacLeod and John Ralph Piper.  A total of 79 bombers were lost that night. Here’s Martin Benedict LeBoldus:

Mr Leboldus wrote a very bitter letter to the Secretary of the Department of National Defence for Air about the death of his sons:

“Other boys spending their time of war in Canada, yes hundreds and thousands walking the streets of Canada for years, and all our three boys were in the front line of attack. I have my doubts whether this is right and just. Plenty of those who offered three four years ago never seen any fighting nor smelled any powder, why all mine have to do it?”

Nowadays the LeBoldus brothers are not totally forgotten. Canada is a vast land so it is comparatively easy to give names to hitherto unnamed geographical features. They are called “geo-memorials” and there are now more than four thousand of them. Leboldus Lake in north-western Saskatchewan is named after Peter John Leboldus. The Leboldus Islands there are named after Martin Benedict Leboldus. The link between Leboldus Lake and Frobisher Lake is called the Leboldus Channel after John Anthony Leboldus. What a pity that we don’t do that over here in England.  What a pity there are no streets in either Nottingham or Solihull named after Robert Jackson, killed at the age of 22, fighting for his country.

(Picture of the black Boston borrowed from wp.scn.ru.)