One of the more interesting issues in the area of local Natural History concerns the occurrence of eagles in Nottinghamshire in centuries gone by. In the era of the Anglo-Saxons, for example, the white-tailed sea eagle was called the Erne. This, supposedly, gave the town of Arnold its name.

More problematic is the Golden Eagle, which certainly occurred in England much more frequently in the past than it does now. Between 1800-1900, there were at least twenty records nationwide with seven different birds in Yorkshire: 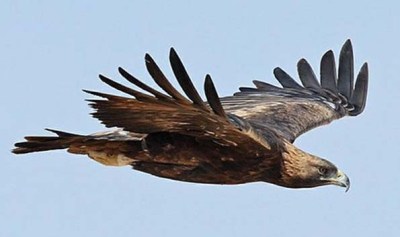 In books about local ornithology, there are some really old records of Golden Eagle. In “The Birds of Derbyshire” which was published in 1893, F.B Whitlock quoted an earlier, eighteenth century ornithologist, Mr Pilkington, who wrote about a Golden Eagle which was seen in Hardwick Park, a large estate right on the border of Derbyshire and Nottinghamshire. Hardwick Hall itself is within less than half a mile of the county boundary and in the absence of an exact location for this particular bird, it seems hardly unreasonable to suggest that it must have ventured into Nottinghamshire at some point during its stay. Both Hardwick Park and Hardwick Hall are easy to spot on this map. I have marked the county boundary between Derbyshire (top left) and Nottinghamshire (bottom right). Look for the orange arrow: 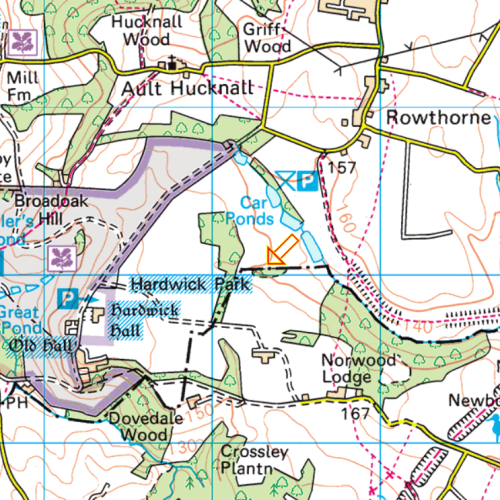 That particular Golden Eagle occurred as far back as 1759. A second Golden Eagle was shot in the same area around 1770. Twelve years later, in 1782, two Golden Eagles were seen “in the out-lying portions of Sherwood Forest, near Hardwick”. It was obviously a suitable habitat with a good supply of food.
In his “Ornithology of Nottinghamshire” published in 1866, William Felkin stated that “The eagle has twice been seen near Beeston: once by myself.” As a man, who, unfortunately, had no digital camera or mobile phone to record evidence of what he had seen, Felkin could have been no more definite than that.

I have recently become addicted to acquiring those reprints of Victorian Ordnance Survey maps and they do reveal that the outskirts of Nottingham were unbelievably countrified as recently as 1901 and even more so in 1866. Perhaps a stray eagle is not quite an outrageous bird to have seen, if only just passing over.

Felkin also noted that a Golden Eagle had been killed in an unrecorded year long ago at Castle Donington. This village, of course, is nowadays on the border between Derbyshire and Leicestershire, although it is reasonably close to Nottinghamshire. Felkin considered that this bird had occurred on Nottinghamshire’s “south-western border” and as such, was therefore worthy of inclusion in his important book about the county’s avifauna: 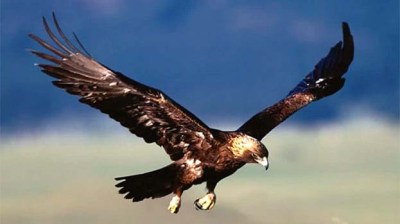 Modern birdwatchers would say that all these observers were simply mistaken, but that has always seemed a rather strange attitude to me. Just because they lived in the eighteenth or nineteenth century does not make people less trustworthy or more stupid than us. Certainly, in the case of the Golden Eagle which was shot around 1770 near Hardwick Hall, it would have been seen by a great many people once it was stuffed and out on display. They would certainly not have been slow to speak up about any identification errors committed by his Lordship or, indeed, his bird stuffer: 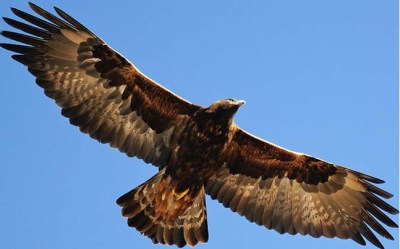 Joseph Whitaker mentions a number of eagles in his “Birds of Nottinghamshire” published in 1907, but these were all considered to be White tailed Sea Eagles, spending their winters further south than their summer breeding areas. His first account was:

“It was in the winter of 1838 that the bird appeared in Welbeck Park. Mr Tillery says :–
“The lake was frozen over at the time, except in one place, where a flush of warm water entered from a culvert which drained the abbey. The place was covered with ducks, teal and widgeon, and I saw his majesty swoop down once or twice to get one for his breakfast, but unsuccessfully, as the ducks saved themselves by diving or flying off. The park-keeper got two shots at him with a ball on a tree but missed him each time, and he gradually got wilder, so that he could never be approached again near enough for a shot. After levying blackmail on the young lambs, hares and game in the neighbourhood, he took himself off after three weeks’ sojourn” 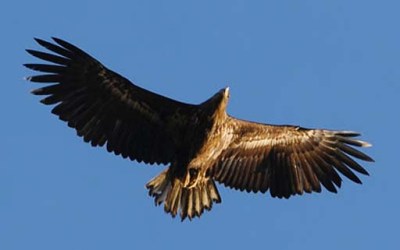 In 1857, a single White tailed Sea Eagle was shot at Osberton near Ollerton on a date several days before January 13th. According to F.O.Morris, the nationally regarded author of “A History of British Birds”, he was informed of the occurrence by Sir Charles Anderson, Baronet, a gentleman who was presumably known to George Saville Foljambe Esquire on whose estate near Osberton the event took place. Sir Charles wrote thus…

“It was first seen sitting on a tree near a place where a cow had been buried a few days before and it continued flying about this locality for some days, always returning to the same tree, as if attracted towards it. There was partial snow on the ground at the time.” 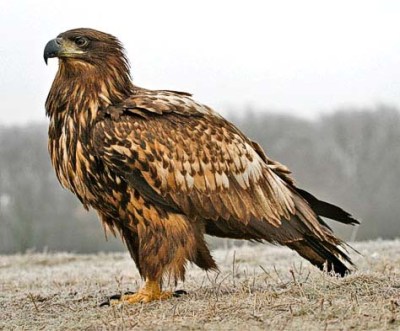 William Sterland included in his two main books, “The Birds of Sherwood Forest” (1869) and “A Descriptive List of the Birds of Nottinghamshire” (1879) an account of the occurrence of a second White tailed Sea Eagle in Lima Wood at Laughton-en-le-Morthen. Strictly speaking, this bizarrely named village is in Yorkshire but it is really quite close to the Nottinghamshire border. On this map, Laughton-en-le-Morthen is towards the top left corner and I have indicated the dark blue county boundary with the orange arrow: 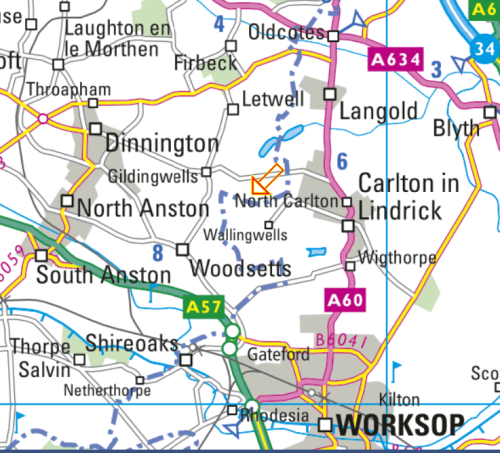 This occurrence was only a few days after the demise of  another eagle, shot on the Foljambe estate near Osberton, and related immediately above. Whether the two birds were connected, male and female, or perhaps siblings, we will never know. It is certainly a very striking story:

“The bird was seen in the neighbourhood of Morthen for more than a fortnight before it was shot. On several occasions it was observed perched in a tree about a hundred yards from Pinch Mill, the person resident there taking it at that distance for a stray heron. Thomas Whitfield, the gamekeeper to J.C.Althorpe Esquire of Dinnington made many attempts to get within range of the bird, but was often baffled by its wariness. It was observed to be much molested by crows and small birds, and frequently, as if to escape from persecutions which were beneath its notice to resent, it would mount into the air with graceful spiral curbs until it became nearly lost to sight, leaving its puny assailants far below, and then would sweep as gracefully down again, with all the ease and lightness of wing of the swallow.” 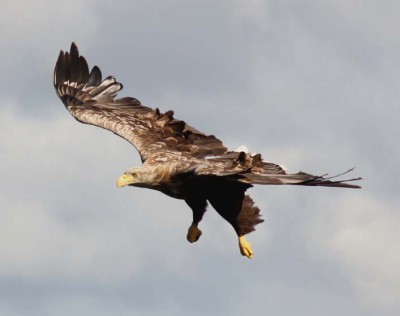 “It seems uncertain what its food consisted of during its sojourn for it was not seen to make any attack. At night it roosted on a tree, but still maintained a vigilant watch. When perceived by Whitfield, it was perched on a tree on the outskirts of the wood, but the night being moonlight, it perceived his approach and he had great difficulty in getting within gunshot. At the moment of his firing it flew off and he thought he had failed in hitting it; but in the morning he found it dead in an adjoining field. Its expanse of wing from tip to tip was seven feet six inches and it weighed eight pounds and a quarter. The friend I have mentioned kindly procured the loan of the bird from Whitfield and sent it for my inspection. It is a fine specimen in the immature plumage of the third or fourth year.”

The bird was shot on January 13, 1857, although. clearly, it had been present for some time before this. 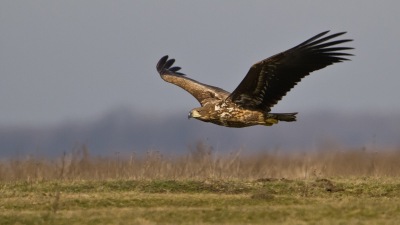 Nearly forty years later in 1896, a single White tailed Sea Eagle was seen in the Deer Park at Park Farm, Annesley, between Nottingham and Mansfield, on November 5th, and for several days afterwards. It was thought to have been attracted to the area by the large number of rabbits present there and indeed, on a number of occasions, was seen feeding on them.
On November 8th, it was shot by Mr George Charles Musters, as it fed on the corpse of a rabbit, and when examined was found to have a total wingspan of seven feet one inch, and a weight of nine and a quarter pounds. It was an immature bird, although not a first winter individual, being considered to be probably three or four years old. It was, of course, preserved by a taxidermist and soon occupied pride of place in the collection of Mr John Patricius Chaworth Musters at Annesley Park. 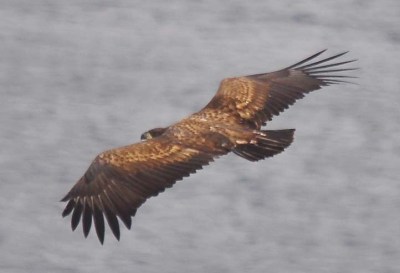 In Joseph Whitaker’s own personal copy of “The Birds of Nottinghamshire”,  housed in Mansfield Library’s local collection, he has appended a short note in pencil, written in that punctuation-free style that he always seems to use:

“I was standing on doorsteps one day in August 1907 waiting for carriage to come round it was a clear warm day a few white clouds were passing over very high I was looking up in the sky when I saw a bird pass under a white cloud it was so high if the white had not shown the job I should never have seen it but it was most distinct + I am certain it was an eagle by its size + flight whether Golden or White tailed I do not know.” 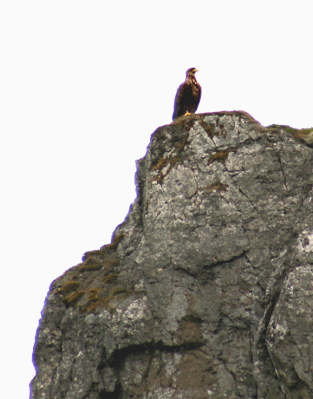 In another handwritten account in 1916, Joseph Whitaker tells the following story which, although illegible in places, is clear enough to constitute a valid record:

“A large bird of the (illegible) kind was seen by Mr Henry Smith’s son in Nov 1916 flying over his farm at Cropwell Butler. He wrote to me saying it was a very big bird + had a white tail. I told him it would be a mature Sea Eagle, and as such a bird was shot in Lincolnshire by Mrs (illegible) keeper of the next week. There is no doubt it was the same bird.”

Attitudes about shooting birds though, were gradually changing: people were well aware that a previously healthy Victorian population of Sea Eagles had disappeared from Scotland by 1900, every single one either shot or poisoned. The very last Sea Eagle was killed on the Shetlands in 1916, an albino bird shot by a member of the clergy.
These new, more conservationist, ideas were reflected in an account included in the Ornithological Records of the now defunct Nottingham Natural Science Field Club. It was included by one of the club’s most prominent birdwatchers, Frank Hind. Even nowadays, his handwriting is still recognisably angry:

“A Sea Eagle was shot by some bounder at Grimesmoor and sent to a taxidermist at Grantham in February of 1920. Mr Turton saw it there. It measured seven feet from tip of one wing to the tip of the other.

This rare visitor had shared the fate of so many noble birds which were frequently to be seen in the British Isles before anyone with a few pounds could buy a gun to destroy whatever his few brains had prompted him to shoot at.”

Nowadays, the positive attitude is the one which has prevailed. Even as I write, there are reintroduction schemes for this magnificent raptor in Ireland, eastern Scotland and many other areas of Great Britain. Many people would like to see it reintroduced to England and the debates rage about whether to select Norfolk or Suffolk. In the Inner Hebrides in western Scotland, of course, these charismatic birds are worth hundreds of millions of pounds to the local economy. Listen to just a few hundred quids’ worth of camera in this wonderful video by Brianpwildlife:

And no, they can’t carry off children or adults or small cars or large cars or vans or lorries or even what appears to be a young man equipped with perhaps a camera on a tripod or maybe a specially adapted hover mower for ice covered lawns: 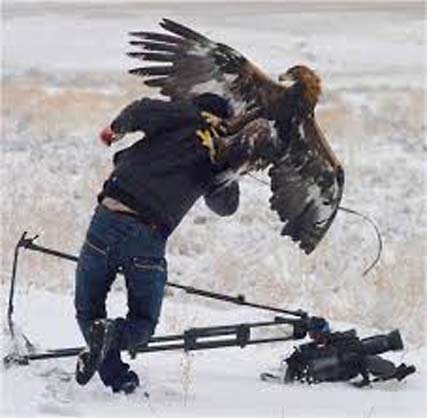