A little taste of Egypt in Nottingham

How do they give names to the streets and roads of England? Well, there are lots of methods. Let’s take a quick look at Nottingham.

They are named after famous people (Shakespeare Street). They are named after the people who used to live there (Friargate) and the activities that used to happen there (Fletchergate….fletchers make arrows, or it’s from the word “flesh” which is what butchers sell you). Where the road goes to. (Hucknall Road). Who owned the land (Thackeray’s Lane). What the church is called (St Peter’s Gate). What building is there (Castle Gate). After events that happened in history. (Standard Hill…..where King Charles I first raised his banner and began forming an army at the outset of the English Civil War on August 22nd 1642.)

“Gata” incidentally is an old Viking word for street and will date back to 867AD when Nottingham was captured by the dreaded Northmen.

During the house building boom in the suburbs of Nottingham during the late 19th century and the early 20th century, the builder would often name streets after his own family. Here is an example in West Bridgford. Look for the Orange Arrow, wearing his anti-Covid mask:

The only problem is that we can recognise the first names such as Florence, Mabel and Violet,  but what was their surname? Was it Crosby or Trevelyan? So often they seem to miss this detail out, or  not to make it too obvious which name it is.

Has this builder tried his best to make it obvious by putting all of the first names around the surname “Musters” ? 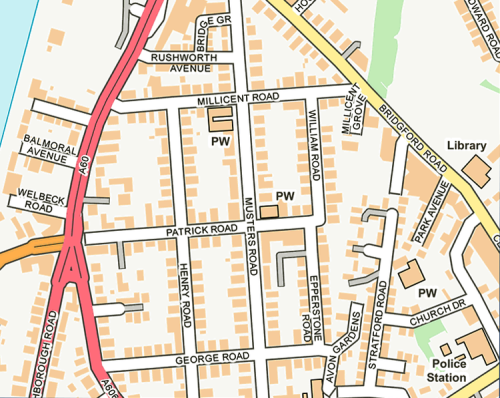 Exactly the same thing was still going on in the mid-1970s when we moved into suburbia ourselves. The same problem remained, though. What was the surname? Our house was at the end of the Orange Arrow. The fourth one down the hill from the little gap which had an old oak tree in it.

Strangest of all, though, in Nottingham, are the streets which are all, clearly, named after a particular event, or even after another country. Between 1880-1900, the theme in a particular suburb of Nottingham, namely New Basford, was Egypt. This was a working class area with a huge number of terraced houses, and somebody, somewhere, decided to name the streets there in such a way as to commemorate the British involvement in Egypt, although I have been unable to ascertain any definite answer to that simple question….”Why now? ”   Was it to commemorate Nelson’s victory in the Battle of the Nile in 1798 ? Or the opening of the Suez Canal in 1869 ? I just don’t know.  Perhaps it was because of events in 1882. Wikipedia says that :

“After increasing tensions and nationalist revolts, the United Kingdom invaded Egypt in 1882, crushing the Egyptian army at the Battle of Tell El Kebir and militarily occupying the country. Following this, the Khedivate became a de facto British protectorate under nominal Ottoman sovereignty”.

Whatever the answer, we now have, in New Basford, an Egypt Road, a Cairo Street, a Delta Street, a Suez Street and a Rosetta Road :

Do we all understand these references ?

Well, first of all, in the photograph below, there’s Egypt Street on the left, the home of Ramesses the Great and the Arab world’s greatest rock group, Mo Salah and the Pyramids. As a bonus, there’s also an excellent view of the junction with Suez Street :

Suez also has a canal. Here it is during the rush hour. It looks like the US Navy has brought its aircraft out to sunbathe:

Cairo is famous for its rush hour although I was really disappointed that it was cars not camels. Camels are far too clever to get into this kind of mess :

And here’s Cairo Street, once the traffic has thinned out a little. Watch out for that camel behind you! 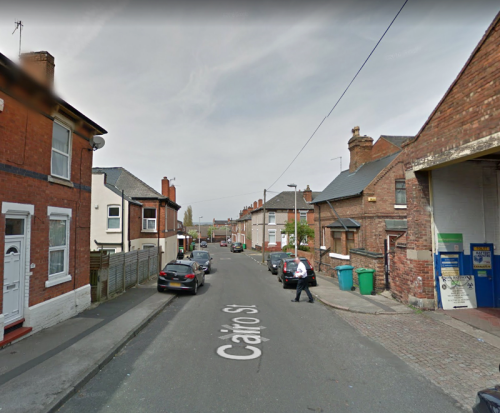 Here’s the Nile Delta, which has its very own rush hour, but with dhows rather than supertankers :

Last and most famous is the Rosetta Stone, commissioned by Pharaoh Ptolemy V and found in the city of Rosetta two thousand years later, decorated with the same thing written in three different languages.

Firstly, there are hieroglyphics for the priests, then Demotic, the native Egyptian script used for everyday business, and Ancient Greek, the language of the civil service. At this time Egypt was ruled over by Greek speakers after Alexander the Great conquered the country :

Notice how somebody has put a magnifying glass over each bit, so that you can see the differences. Rosetta Road has no such problems over communication, because 99% of the time, it is deserted, except for cars: 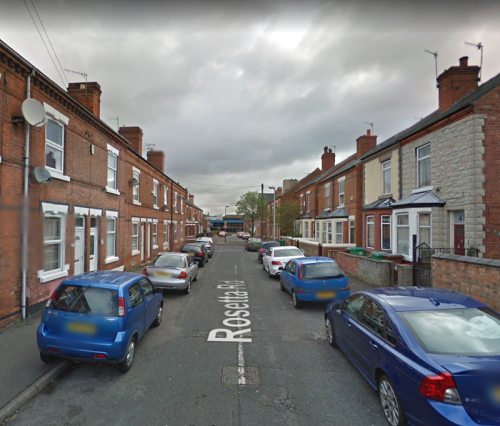 Originally the French had the Rosetta Stone, but after Admiral Nelson beat them in the Battle of the Nile, the English took it to the British Museum where, even now, it is the most visited thing in the whole museum. I thought that title might have belonged to the toilets: 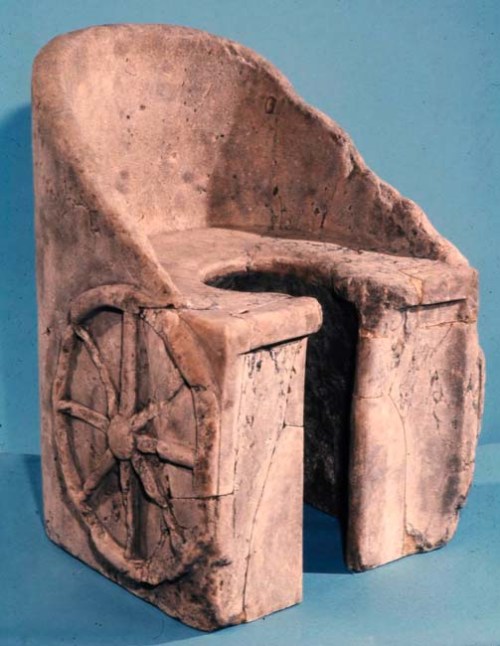 The details that I found for the year 1792 come from a source that I have used quite frequently before, namely “The Date Book of Remarkable Memorable Events Connected With Nottingham and Its Neighbourhood”.

The year started in spectacular fashion on February 25th:

“Between the hours of eight and nine this evening an alarming shock of an earthquake was felt in the Midland counties, but particularly at Nottingham, many of the inhabitants running out of their houses, expecting them to fall upon their heads. The shock was preceded by a rumbling noise like the rolling of a cannon ball upon a boarded floor.”

May 9th . “On the arrival of the intelligence that the bill authorising the formation of the Nottingham Canal had received the royal assent, the bells of both churches were set a-ringing, and other congratulatory manifestations indulged in.”

Thank the Lord. We’re going to build a canal. Canals are wonderful :

If you look after them, and remember, like pot plants, to water them regularly:

I think by now people’s nerves were already on edge after over indulging in their personal celebrations of the success of the planning application for building the new canal. They were a little like small children who get fractious and behave badly after their routine is disturbed:

May 12th.  “A number of people assembled in a riotous manner in the Market-place, on account of the high price of butchers’ meat: 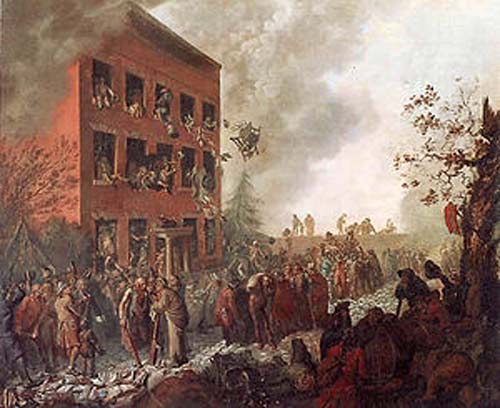 The Market-place did look quite different then:

After a stout endeavour to retain possession of their property, when further resistance might have proved dangerous, the butchers retreated from the Shambles, and left the mob in undisturbed possession. It being Saturday, the stock of meat was large and in a few moments the whole of it disappeared.

The magistrates at once called out the military, and by the expostulations of the Mayor, and the firing of the soldiers in the air, the mob dispersed, and the military returned to their quarters.”

Here come the military. They do look a little bit regimented, I suppose, but they are a lot easier to draw this way:

“Very unexpectedly, in the course of the evening the depredators reassembled, and bearing down upon the Shambles with renewed force, destroyed and conveyed away every door, shutter, implement, and book they could find in the shops, and made a great bonfire of them in the Market-place, yelling and shouting round it like  savages. The fire was burning from eleven at night till one in the morning, when the military succeeded in extinguishing it, and tranquillity was restored.”

For a moment there, it must have been touch and go:

I would think that for the second military intervention, they used the soldiers with the silly hats. Most people, when faced by these picked German troops, just ran away clutching their stolen sausages: 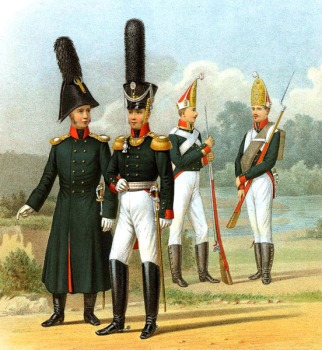 “For several days after, symptoms of a recurrence of the disorder were apparent, but the vigilance of the authorities at length finally suppressed them.”

Nobody nowadays ever thinks of England as ever being on the edge of revolution, but it had already happened once during the reign of King Charles I when the king was executed. The end of the 18th century saw a fair few Englishmen holding up the French Revolution as an example of good practice. They were pushed into that by a royal family who were perhaps the least charismatic of the many Germans who have ruled over our country. Parliament was no better. It was a place where rich landowners were vastly over represented. Their excessive number of MPs kept the price of the food their estates produced artificially and permanently high.

Many revolutions around the world have started with hungry people robbing shops full of food they wanted to eat but could not afford.