This is another candidate in my series, “Why no statue?”

This time, we move to the deep south of England, to the area of Lyme Regis and Charmouth, to be precise. Keep your eyes open for the orange arrow.. 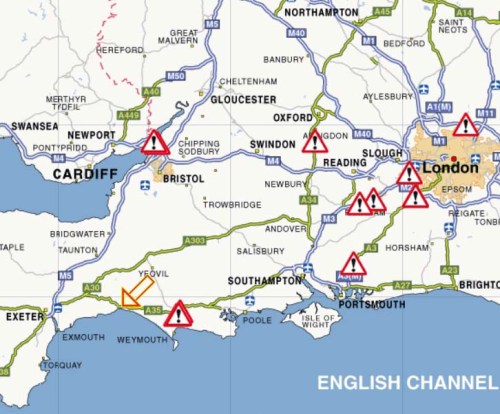 Mary Anning (1799-1847) was alive at a time when the entire country believed that the Earth was not very old at all and that it was impossible for species to change or to evolve or even to become extinct.

Mary was born into the family of a cabinetmaker, who died when she was eleven. They supplemented their income by selling fossils from the cliffs on the coast to tourists, from a table outside their home. The latter was so close to the sea that storms often flooded the ground floor and the family had to climb out of a first floor window to escape a watery grave. Here is a typical storm at Charmouth :

Of ten children, only Mary and Joseph survived their childhood. Wars had tripled the price of wheat, but wages had remained the same. The child mortality rate was 50% and smallpox and measles were mean spirited killers. On August 19th 1800, baby Mary was nearly killed but not by disease. She was being held in the arms of a neighbour, Elizabeth Haskings, who was talking to two friends under an elm tree. The tree was struck by lightning and only Mary survived. She was rushed home and revived in a bath of warm water. Wikipedia said that:

“afterwards she seemed to blossom. For years afterward members of her community would attribute the child’s curiosity, intelligence and lively personality to the incident.”

In 1833, a landslide killed her dog, Tray, a black-and-white terrier, at her feet as she hunted fossils under the cliffs. She wrote to her friend:

“Perhaps you will laugh when I say that the death of my old faithful dog has quite upset me, the cliff that fell upon him and killed him in a moment before my eyes, and close to my feet … it was but a moment between me and the same fate”.

Here’s Mary and Tray, on a happier day:

Mary learnt to read and write at a Congregationalist Sunday school. Her favourite possession was a bound collection of the Dissenters’ Theological Magazine and Review containing two essays by the family’s pastor, James Wheaton. One said “God created the world in six days”, the other was entitled “Don’t forget to read about the new science of Geology”.

Mary looked for fossils in the coastal cliffs around Lyme Regis, especially the mudstone cliffs at Charmouth:

Mary was the first person to identify an ichthyosaur skeleton. She was only eleven years old:

On December 10th 1823, she found the first complete plesiosaurus:

In December 1830 she sold a new species of plesiosaur for £200, an enormous sum in those days, around £25,000 in today’s money. Lady Harriet Silvester had written of Mary, four years earlier:

“It is certainly a wonderful instance of divine favour – that this poor, ignorant girl should be so blessed, for by reading and application she has arrived to that degree of knowledge as to be in the habit of writing and talking with professors and other clever men on the subject, and they all acknowledge that she understands more of the science than anyone else in this kingdom.”

Indeed, on one occasion, the doctor and aide of King Frederick Augustus II of Saxony asked her to write her name down for him.

She spelt it as “Mary Annins”— and told him “I am well known throughout the whole of Europe.”

In the early 1820s, the eminent French anatomist Georges Cuvier accused her of forging fossil animals by adding extra ones more or less at random. After a meeting of the Geological Society, Mary was completely exonerated and Cuvier forced to say that he had acted in haste and was wrong.

Here’s a caricature of Cuvier. In actual fact, Mary Anning was not the only person to get the better of him, despite his having a brain the size of a brontosaurus.