Last time, I showed you a picture of the England football team all making their Nazi salutes at the Olympic Stadium in Berlin on May 14th 1938. They were the good men who stood by and did nothing:

The England team though, were were not the only foreigners to greet the Führer with a cheery “Sieg Heil”. Here, just a year later, is the Republic of Ireland football team engaged in pretty much the same behaviour. Is this the old saying, “The enemy of my enemy is my friend”? After all, the Irish Republicans hated the British. The Germans hated the British. Result: a football match made in Heaven:

And here’s a third group of Nazi sympathisers and Jew haters. No great surprises with this one: 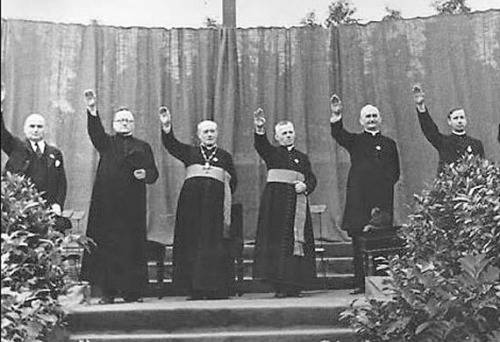 Perhaps one of them is Bishop Alois Hudal, who was an Austrian titular bishop in the Roman Catholic Church and the author of the catchy best seller in cathedral bookshops across Europe, “The Foundations of National Socialism”:

Hudal was no Nazi, of course, no racist. He just took being a good man who stands by and does nothing one stage further. He decided to be a bad man and join in enthusiastically to help the evil, presumably on the basis of “Whoever kills Jesus deserves all they get.” That attitude though, can get you into very deep doo doos, however.

Hudal, for example, is credited with organising the escape from justice of war criminals such as Franz Stangl, the Commanding Officer at Treblinka Extermination Camp, which killed between 700,000-900,000 human beings:

Stangl himself said that he went looking for Hudal in Rome, because he knew the bishop was helping all Germans. Hudal arranged rooms in Rome for him, helped him to escape through a “ratline” and then gave him money and a visa to Syria. Using a Red Cross passport Stangl lived happily in Damascus, where Bishop Hudal found him a job in a textile factory.  He remained in Syria with his wife and family for a few years before moving to Brazil in 1951. Stangl then found work with Volkswagen still living openly with no problems, still using his own name.
Another Nazi war criminal allegedly helped by Hudal was SS Captain Eduard Roschmann, the “Butcher of Riga”, who killed 24,000 Jews in the Latvian ghetto.

Hudal helped Josef Mengele, the Mad Doctor at Auschwitz, the “Angel of Death”, who always introduced himself to the Jewish children as “Uncle Mengele”:

Gustav Wagner was the commanding officer of Sobibor, where between 167,000-300,000 human beings were killed. Hudal and others in the Vatican helped him to flee to Syria, and then to Brazil, where he became a citizen in 1950. Extradition requests from Israel, Austria and Poland were rejected by Brazil’s Attorney General who also rejected those from the West Germans.

In 1980, Wagner supposedly committed suicide in Sao Paulo. This was after he had given himself a severe beating, cut off all the fingers of his right hand and then stuck a very large knife into his own chest.

So where is all this going? Well, we’ll see in Episode 3.