Last time I was explaining the connection between the Short Sunderland flying boat and “Das Fliegende Schtachelschwein” aka “The Flying Porcupine”.

This thorny porcine epithet comes from an aircraft which was based at Invergordon in north east Scotland in 1940. My story will be based primarily on the work of John Robertson in 2010. I had never heard any explanation of the nickname and it is a tale of heroism well worth telling and re-telling, believe me.

The particular Sunderland was N9046. It belonged to 204 Squadron and its squadron letters were KG-F. Here it is, although it seems to lack the KG-F:

The crew left their northern Scottish base on April 3rd 1940, tasked with carrying out a ten hours protection patrol, looking after a convoy bound for Norway. There was absolutely no sign of the enemy, until two Junkers Ju88s, probably from II./Kampfgeschwader 30, appeared at low altitude over the water, seemingly having arrived from a base in southern Norway, or perhaps in Denmark. Here is a nice Junkers Ju88 in full-ish colour:

And here’s the Airfix kit box:

Four more Junkers then attempted to attack the ships but they were driven off by the convoy’s various defences. Less than a quarter of an hour later, six Junker Ju88s came in, four of them almost certainly Ju88A-4s. Two of them came for the Sunderland which went right down to the water to make itself a more difficult target. That didn’t stop the Germans who both attacked fiercely, but the flying boat’s gunners drove them off and they eventually fled.

The situation had now become dramatic enough for it to form the basis of a modern computer game:

The other four Ju88s, having already released their bombs, then made a line astern attack on the Sunderland but the rear gunner, Corporal William Gray Lillie, with his slightly heavier 0.5 machine guns sent the first one spiralling in flames into the cold, cold waters of the North Sea. Ignore the trees. It’s actually seaweed: 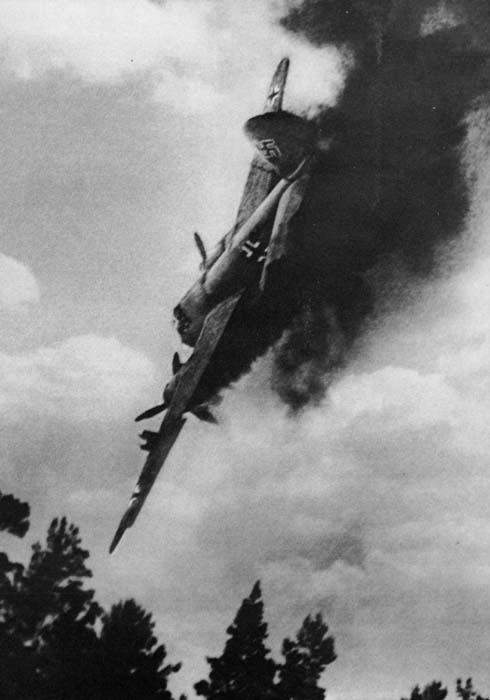 Corporal Lillie blasted the second German in his port engine which was soon pothering black oily smoke and flames. The German pilot left for his land base in Norway, uncertain if he would reach it with only one engine performing properly. In actual fact, he was forced to crash land in the as yet unoccupied northern section of Norway where the crew were forced to set their aircraft on fire before being arrested and interned.

Rather imaginatively, the final two Ju88s then attempted to drop their bombs onto the Sunderland. They missed and finally cleared off home.

N9046 reached Scotland safely and had no problems until Wednesday,  December 11th 1940 when, riding at anchor in Sullom Voe in the Shetlands, it suddenly caught fire and was completely destroyed.

Corporal Lillie was the rear gunner in Sunderland N9028. They had been sent to Trondheim in Norway on a clandestine reconnaissance mission to check the submarine base and to see if the Gneisenau had left the port. Here it is:

Next time, I will show you how a suave English actor is connected to the Short Sunderland and, indeed, the Junkers Ju88.