I bought just a few more photographs on ebay than the ones I showed you last time. They were all taken down at our Valley Road playing fields, and the boys, all of them members of our Preparatory Department, were aged between nine and eleven years old.

The first one is, shock horror!!, a soccer team.

“But I thought it was a rugby school?” I hear you ask.

Well, the main School is a rugby school, but what is now the Junior School, and was then the Preparatory School, has always played football, presumably because there is less chance of serious injury for small boys when they play football. This is the Second XI during the 1965-1966 season:

The players’ names are on the back:

And now, Technicolor ©, the only one of the photographs I bought: 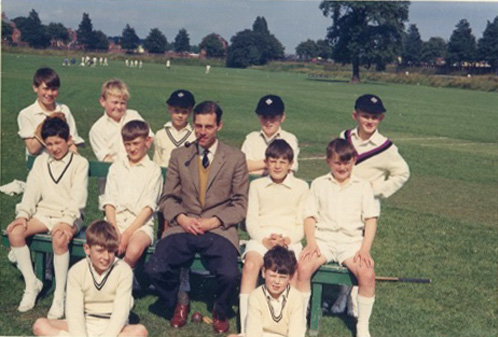 In this photograph you can see the huge tree which used to stand near the Daybrook. It was damaged by the Great Storm of 1987 and eventually had to be taken down. In its time it has sheltered hundreds of cricketers who waited, either to bat or to go out and field. Traditionally, they all seem to have eaten bags of fresh cherries as they sat happily out of the sun. Perhaps this was a particularly freely available local fruit at the time or perhaps it was just fun to spit the stones at each other afterwards.

The team is listed on the back:

I don’t know if Mr Clarke and Mr Willey are still alive but they were both good men, much respected by their colleagues over the years. The boys in these teams may well be retired now. I hope they all made it through to their pensions! The very worst thing about teaching is the number of pupils who leave us for one reason and another as we grow older. I am sure that most teachers think about them from time to time. I know I do.