The catalyst for the war was the discovery of diamonds and gold in the Boer states.

Alexander Frederic Wallis was born on January 18th 1867. Nottingham had seen its worst floods for fifteen years on January 9th. Two feet of water washed over the railway tracks at the station. On the 14th, a recently constructed factory on Carlton-road (sic) had caught fire. On March 14th, the Mechanics Hall was completely destroyed by fire. On March 20th an enormous fire destroyed the premises of William Smith, a “chenille and gimp manufacturer”. On April 2nd, the council agreed to order a steam fire engine, at a cost of £650. This type of thing. A combined fire engine and smoke screen generator:

Alexander Frederic Wallis’ father was Alexander Bruce Wallis, the Captain and Adjutant of the Robin Hood Rifles. In 1879 the family’s address was 1 Goodwin Street, near All Saints’ Church in the area to the west of Waverley Street, more or less directly opposite the bandstand in the Arboretum Park. Goodwin Street is very, very striking, with its tall tenement houses like you might find in Edinburgh or Glasgow. They all have four floors including one for the servants.Here it is. Look for the orange fire engine arrow. 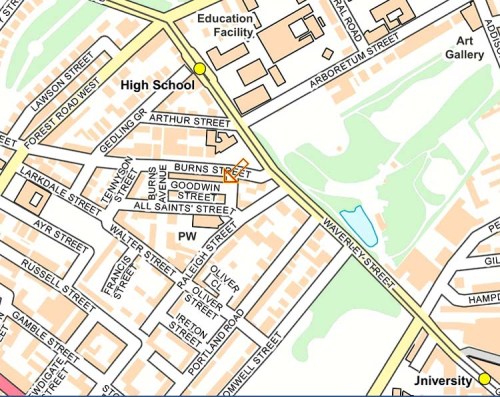 The “education facility” in the middle at the top is the High School. Raleigh Street (west of the Arboretum Lake, and south of the orange arrow) was where the history of Raleigh bicycles started in 1885. That is why the brand was called “Raleigh”.

In the same year, Captain Wallis had moved to nearby No 3 Burns Street, a magnificent Victorian house with that eccentric, almost random architecture of the wilder Victorian architects of the period, including huge gables, oriel windows, patterns made with darker bricks and a pointed archway to the front door. Here is the house today: 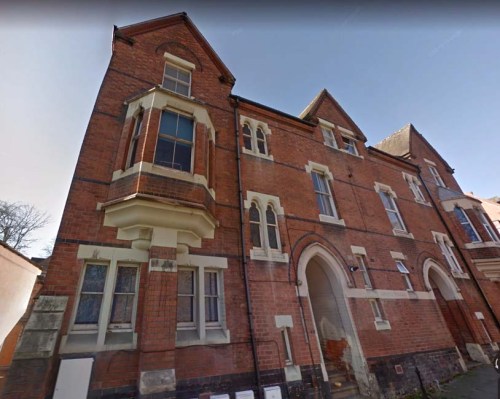 By 1894, now Major Wallis rather than Captain, he and his family were living at 50 Forest Road West, extremely close to the High School. On the map above,  Forest Road West is to the west of the small lemon yellow coloured circle which represents the High School’s tram stop. Four years later in 1898-1899, Major Wallis and his family had moved to Neville Terrace at 15 Wellington Square, directly off Derby Road just after Canning Circus. This must have been much more convenient for the Robin Hood Rifles’ Orderly Room in Castle Yard. The family were still there in 1904, but after that, I was unable to trace them.

Their son, Alexander Frederic Wallis entered the High School on September 12th 1879 as Boy No 583. He was 12 years old. His career remains a blank because the majority of the School Lists have not survived and the rest are just lists of boys’ surnames with no distinguishing initials. The School played soccer then but Alexander does not figure in the reports we still have, nor indeed, in the records of the cricket team. He left the High School at the end of the Christmas Term in 1882. Here is the High School during that era, captured in a high quality albumen print:

At this time the Headmaster was Dr Robert Dixon, nicknamed “Dido” and the staff would have included Mr Bray or “Donkey”, Mr Seymour or “Donkeys”, Mr Jennings or “Jigger”, Mr Corner or “Sammy” and his younger brother, Mr J Corner or “Jig”, Mr Townson or “Benjy” , the Reverend Easton or “Jiggerty” and Mr William Edward Ryles or “Jumbo” and Mr Wilfrid Tyson Ryles or “Nipper”.

Nicknameless staff included Herr Altorfer, Monsieur Brunner, Monsieur Durand, Mr Jackson, Mr Small and Sergeant-Major Vickers the Drill Sergeant. There was also Mr Leopold Compline Wilkes or “Demi”, who went to South Africa in 1893 to be Headmaster of Kimberley Public School, only to die of typhoid, or enteric fever, on May 16th 1899, aged only 37. Here they all are. Still shocked by the recent death of General Custer:

Like poor “Demi”,  young Alexander Wallis, now 33 years of age, was also destined to die in South Africa, but as a soldier during the Second Boer War. He was just one of the 23,000 who paid the ultimate price of other men’s greed. Here is his epitaph taken from “The Forester” as the first School Magazine was called :

“Captain Alexander Frederic Wallis, killed in action near Arundel, near Colesberg, in Cape Colony, on February 24th 1900, was the second son of Major AB Wallis, formerly of the 33rd Duke of Wellington’s (West Riding) Regiment and late adjutant of the Robin Hood Rifles. He entered the High School on September 12th 1879 and left at Christmas, 1882, being afterwards educated at Derby and Sandhurst. Captain Wallis entered the 2nd Battalion Duke of Wellington’s (West Riding) Regiment as a second- lieutenant and obtained his lieutenancy in 1889 and his captaincy in 1896. He served in Bermuda, Halifax, Jamaica, St Helena, Natal and Zululand. On the outbreak of the Matabele war in 1896 he proceeded to Mafeking where he served at the base and on lines of communication. At the finish of the war he went to Malta and was then quartered with the regiment at Dover in Kent. The regiment then went out to South Africa, Captain Wallis being in command of the Mounted Infantry Company. On his arrival in Cape Town he joined Major-General Clements’s (sic) Brigade at Arundel. He had just celebrated his 33rd birthday, and had 13 years’ army service. In Nottingham much sympathy is felt for Major Wallis in his bereavement.”

The village of Colesberg saw many battles and skirmishes during the Second Boer War. They brought into opposition the British and the Boers of the Transvaal and the Orange Free State. This is the view looking towards the village:

A day-by-day timeline of the war listed the day of Alexander’s death as an “engagement” rather than a skirmish or a battle.