The Hendon Lancaster 137 not out

A few years ago, I drove down with the family to the RAF Museum at Hendon, just to the north of London. I made an immediate bee-line to the Bomber Command section to see their Avro Lancaster. Most of the aircraft here have their original coat of paint from World War II, so, to prevent it fading away completely under the onslaught of bright, harmful sunshine, the lighting is very subdued. That made it rather difficult for me to take photographs of a decent standard. Indeed, for the general view of the aircraft, I have had to use a photograph from the Internet. Here it is, with its capacity to carry up to 14,000 lbs of bombs into Nazi Germany: 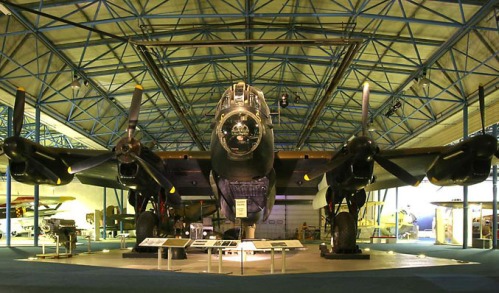 Here is the front of this mighty bomber. Its huge black tyres are not far short of the height of a man. The yellow tips of the propellers are a safety feature and the yellow letter “S” is the aircraft’s squadron letter as “S-Sugar”:

This is the rear of the bomber. It has twin tails to give the mid-upper gunner a greater field of fire. You can see the door for the crew, which kept them well away from the four propellers, but it meant a very long and difficult crawl to the front of the aircraft. Its squadron letters are PO-S and its serial number is R5868:

This particular plane is the oldest surviving Lancaster and the first RAF heavy bomber to complete 100 operations. It eventually went on to fly 137 sorties. R5868 was originally “Q-Queenie” with No. 83 Squadron at RAF Scampton and then became “S-Sugar” with No. 463 and No. 467 Squadrons of the Royal Australian Air Force at RAF Waddington. Its very last job came in May 1945, when it was used to transport liberated Allied prisoners of war back home to England.
The four Merlin engines have on them the names of the crew who received decorations. This is the starboard inner engine:

Here is another name, this time on the port inner engine. You can also see what looks to me to be an 8,000lb bomb underneath the enormous bomb-bay. Such a large bomb was made by merely bolting together two ordinary 4,000lb “Cookies” or Blockbuster bombs: 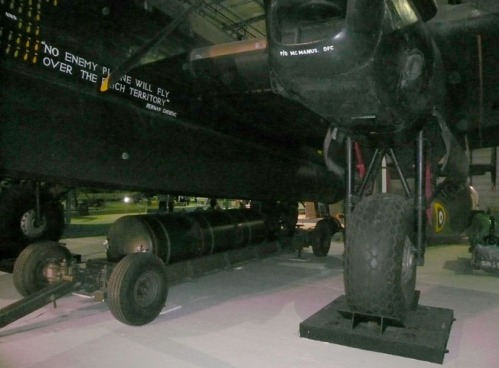 I couldn’t resist showing you for a second time, in this second blogpost, the front of “S-Sugar”, which is adorned with the vain boast of Hermann Göring, “No enemy plane will fly over the Reich Territory”.

It is deliberately painted next to the symbols which represent the huge number of raids carried out over Germany by this one particular aircraft. All of the Avro Lancasters added together flew 156,000 missions over Europe as a whole and they dropped 608,612 tons of bombs on the Third Reich. So much for Hermann Müller and his pathetic promises, detailed in that previous post:

This is a “Grand Slam” bomb. It was designed by Barnes Wallis and weighed 22,000lb, ten tons, more or less, and the specially adapted Lancasters of 617 Squadron who carried it were at their physical limits: 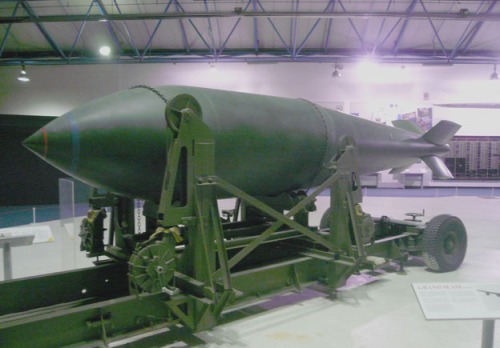 My Dad said their wings were shaped like giant crescents as they took off. When they were dropped, the bombs broke the sound barrier. At that time they must have been among the fastest objects made by Man. They penetrated deep underground and, when they exploded, they easily proved their nickname of the “Earthquake Bomb”. Unlike the majority of bombs dropped by the Allied Air Forces, they were always used on military sites such as U-Boat pens, gun-batteries or railway bridges.
Here is one being dropped by YZ-C of 617 Squadron:

I found two films about dropping a “Grand Slam” bomb. In both cases they are being used to destroy railway viaducts, in order to prevent the Nazis from moving troop reinforcements around their fast diminishing country. In this way, these spectacular bombs must have saved the lives of a lot of good men: