Tag Archives: “Notes on the Birds of Nottinghamshire”

Jer Falcon. one shot at Park Hall by Mr Shelton. Now in my collection.

In his own vastly expanded version of “Notes on the Birds of Nottinghamshire”, published in 1907, and now housed in the local collection of Mansfield Library, author Joseph Whitaker has added, for the most part in pencil, his own notes and additions. In some cases, he has pasted newspaper clippingts onto the pages. At one particular point, towards the end of the book, he has added the following handwritten note, misspellings and all:

“Jer Falcon. one shot at Park Hall by Mr Shelton. We were beating a plantation on Clipstone Road near the Red House Farm it was misty + this falcon flew low over the trees + was shot by him.
I missed this bird out when this book was written. Now in my collection”.

Sceptics might say, of course, that Joseph Whitaker was mistaken in his identification of the bird and that it was, quite simply, not a definite Gyrfalcon. This is, however, a rather unlikely scenario. Joseph Whitaker was familiar with many, many different kinds of raptor. If anything, he had probably seen more species within the county than the majority of present-day birdwatchers. And don’t forget. Mr Shelton shot it. They were identifying a corpse, not a distant dot disappearing into a dismal sky:

In any case a Gyrfalcon would have been easily identifiable on size alone. It is a falcon as big as a Common Buzzard And if Whitaker’s bird was a white phase individual, it would have been totally unmistakeable:

There are only two birds of this size which are completely white, namely Gyrfalcon and Snowy Owl. The latter is not exactly difficult to identify:

Gyrfalcons exist in two different colour morphs and it would, admittedly, have been more difficult to identify a dark morph bird: 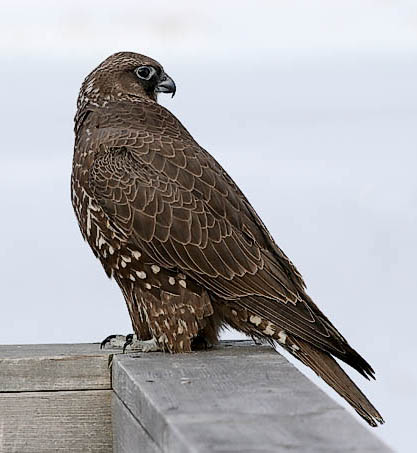 The issue of size would still have been there, of course. Gyrfalcons of both white and dark morphs are huge birds. Furthermore, even dark phase Gyrfalcons are very distinctive birds, especially when viewed as dead specimens.

Dark morph birds may just be an academic problem anyway. According to at least one ornithological authority, namely Fisher in 1967, the vast majority of Gyrfalcons seen in England during the Victorian era were, in actual fact, white phase birds, with apparently only one dark morph individual recorded nationally during the last third of the 19th century.

And in Whitaker’s day, of course, there was no need to worry about the presence of escaped foreign falcons from Australia, or exotic, artificially inseminated hybrids produced by Baron Frankenstein the Falconer. It would have been very difficult to misidentify one of these charismatic killers:

Indeed, it is difficult to imagine what Mr Shelton shot, if it were not a Gyrfalcon. We also know that the bird went into Joseph Whitaker’s collection. This fact in itself would have served as some kind of checking mechanism, since the specimen would have been mounted and then inspected by the continuous parade of visitors to Whitaker’s house in Rainworth. These would have included a large number of nationally reputable ornithologists and it would have been impossible for a man like Joseph Whitaker to have shown them such an important county specimen without their quickly mentioning the fact had the bird be misidentified.

Why then do we not have the Gyrfalcon now? Again, answers are not difficult to find. The bird may have been sold privately, either before or after Whitaker’s death. Equally it was common practice, when the owner of a great collection died, for selected individual birds to be passed onto close friends, before the collection as a whole was sold, usually at a public auction. It is also conceivable that the specimen may have been stolen after Whitaker’s death.

On the death of a great collector, it was a frequent occurrence that the beneficiaries of the estate had little or no expert knowledge of the worth or importance of certain individual stuffed birds. These vulnerable specimens were then liable to disappear between the death of the collector and the public disposal of the collection. This has certainly happened to a number of other birds which are known to have been in Whitaker’s possession but have now disappeared, presumably between his death and the acquisition of his collection on behalf of the Mansfield Museum.
In any case, why should we automatically cast doubt on Whitaker’s handwritten note? What clearer message can the great man have hurled forward into the future, than the one we now have? He offers us the word of an honest man.

You might be lucky enough one day to see a Gyrfalcon in this country. I never have. But I console myself by watching the Peregrine Falcons which have nested for years in the middle of the City of Nottingham:

They can be seen on the Newton and Arkwright Building of Nottingham Trent University on South Sherwood Street, Nottingham.

In this aerial view, the Fire Station is coloured orange as it is the most well known building in this part of the city for the majority of people. (No, it’s not on fire):

Look at the street to the right of the Fire Station and follow it towards the top of the photo. The Newton and Arkwright Building is the enormous white building on the right as you walk up the slight slope towards the Theatre Royal. It is a very distinctive Third Reich type of 1930s architecture.

If you go there, take some binoculars if you have any. Look at the right side of the building. The nest is on a wide lip that runs the whole length of the building, just below a row of largish windows. This street map might help. Look for the orange arrow:

If you wish, you can watch them on a live webcam. The birds are present pretty much all they year round. Theoretically, they should not be here in the winter, but somehow they seem quite frequently drawn back, a little bit like teenagers returning to the Bank of Dad. At the moment, they should be feeding their young. In the past, there have been catastrophes with this, as is always the case with Mother Nature, but if all goes well, it can be a wonderfully blood spattered spectacle.

But back to Gyrfalcons.
Here are a pair of them, filmed by “thegowser1” at 78 degrees north between Svalbard and Greenland:

More typical for a twitcher in north west Europe would be these two films of a bird which had strayed to  Champtocé-sur-Loire, in Maine-et-Loire, France. The two films come from Alain Fossé, and show a raptor doing what they spend most of their time doing…absolutely nothing!. High calorie meals of meat mean you only need move around infrequently (or so I tell my wife).

These are much more typical  of a March day near Mansfield than an icebreaker near the North Pole!